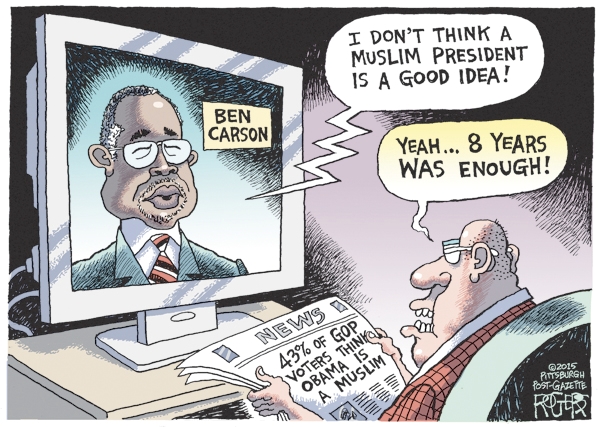 In 1958, Democrat George Wallace, running as a candidate for governor of Alabama and racially moderate enough to be endorsed by the NAACP, was swamped by a strident white supremacist whose campaign played shamelessly to the basest hatreds of the electorate.

Afterward, Wallace complained bitterly to a room full of fellow politicians that the other guy had “out-n—-red me.” And he vowed he would never let it happen again.

As history knows, of course, he never did.

But the point here is that, 10 years later, the social and political landscape had changed so dramatically that no serious politician would have ever thought of using such intemperate language so openly. Mind you, they were not above making appeals to base animosities, but the language became benign and opaque, a “dog whistle” pitched for those with ears to hear.

Thus, Nixon had no need to curse unruly militants and longhairs. He simply spoke of “law and order.” Reagan didn’t call anyone a lazy N-word. He spoke of “welfare queens.” The Bushes didn’t have to slur gay people. They spoke of “family values.”

But for some of us, it appears coded language is no longer enough.

“We have a problem in this country,” said a man in the audience last week during a Q-and-A session with GOP frontrunner Donald Trump in New Hampshire. “It’s called Muslims.” He went on to ask, “When can we get rid of (them)?”

Trump’s flaccid response: “We’re going to be looking at a lot of different things.”

Nor is that even the most appalling recent bit of Islamophobia from the campaign trail. That dishonor goes to Ben Carson, who said Sunday on “Meet the Press” that no Muslim should be president. “I would not advocate that we put a Muslim in charge of this nation,” he said. “I absolutely would not agree with that.”

Later, facing a firestorm of criticism, Carson told Sean Hannity of Fox “News” that he would accept a Muslim who rejects Islam “and clearly will swear to place our Constitution above their religion.” Given that “our” Constitution explicitly forbids a religious litmus test for elective office, that hypothetical Muslim should respond to Carson as follows: You first.

In tacitly endorsing bigotry on the one hand and enthusiastically embracing it on the other, Trump and Carson provide redundant proof that they are manifestly unfit for the presidency. One is sobered, however, by the renewed reminder that such bigotry no longer automatically disqualifies them from it. Indeed, experience suggests that some people will even see it as the sign of authentic truth-telling unencumbered by political correctness.

Make no mistake: Every adult American who uses language — and particularly, those who do so for a living — has at one point or another been bedeviled by political correctness, by the sometimes persnickety mandate to craft what you say in ways that are fair and respectful to everyone who might hear it. What Carson and Trump represent, however, is not solely about language, but about the ideas language encodes.

Which means it is ultimately about what kind of country we are and want to be.

Land of the free, except for Muslims?

With liberty and justice for all, except for Muslims?

All men are created equal, except for Muslims?

Any little girl might grow up to be president, provided she is not a Muslim?

If it is sad that some of us think that way, it is appalling that prominent aspirants to the nation’s highest office can now think that way openly. It suggests the resurgence of the America George Wallace once knew. In that America, there was no need of racial and religious double entendres.

In that America, one entendre was enough.