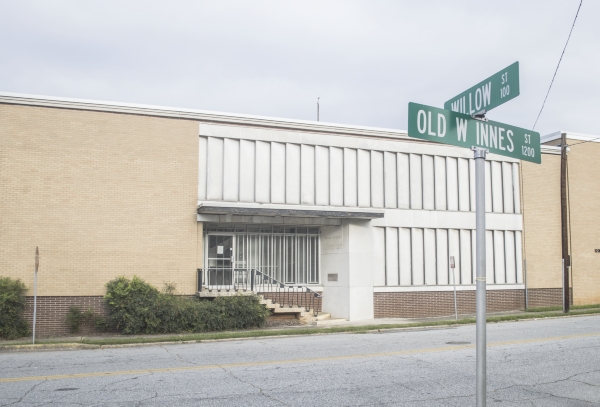 Rowan County received its first offer for a building that sits near the intersection of Old West Innes and Willow streets. The building's official address is 1236 West Innes Street. Josh Bergeron/Salisbury Post

Sitting at the Intersection of West Innes and Willow Street, the building is valued at $1.2 million and estimated at 30,000 square feet, according to tax records. One portion of the building opened in the 1960s another opened in 1952, according to two plaques placed a different locations. The older section of the building still bears a sign naming it the “War Memorial Building.” Underneath the sign, is another that says “Rowan County Farm & Health Center.”

Without discussion, commissioners on Monday tentatively approved a $300,000 offer from Faith Assembly International Church to purchase the property. The church currently operates in a facility near downtown Salisbury on East Horah Street.

The sale wouldn’t become final until the end of an auction process called “upset bidding” and another vote by commissioners.

Through public notices, Rowan County will now advertise the sale of the property, according to County Manager Aaron Church. Once a public notice is published, any additional bidder will have 10 days to make an offer. A subsequent bid would trigger an additional 10 day upset period, and that process would continue until there are no new bids.

First, however, Faith Assembly International Church must deliver a deposit of $3,000, according to a purchase agreement.

Rowan County Clerk Carolyn Barger on Tuesday afternoon said she hadn’t yet received the deposit. Not receiving a deposit by close of business on Tuesday won’t affect the church’s offer, Barger said. She said the church could wait several days to deliver a deposit, if needed.

When contacted by phone, Jacob Doe, the pastor of Salisbury’s Faith Assembly International Church, said his church was outgrowing its current facility on East Horah Street. The former social services building offered the church an opportunity to expand and offer more services to its members, Doe said. He mentioned day care as an example.

If no other offers are made during the upset bid process, Faith Assembly International Church would take ownership of the former Social Services building on Dec. 5.

North Carolina’s general statutes outline a certain formula that dictates the minimum amount of any subsequent offer. At the current bidding price, the next offer would have to be at least $315,050, according to general statutes.

Church, the county manager, said Faith Assembly was the first entity to make a formal offer on the former Social Services building. However, Church said there’s been significant interest in the facility. He declined to speculate on what previous inquiries into the property might mean for its final selling price.

The West Innes Street building is one of two former Social Services properties being marketed by R. Giles Moss. The second sits on Mahaley Avenue, near its intersection with West Innes Street.

Neither of the two former Social Services properties was listed as being needed for future county department growth on a recently presented master plan.

By Rebecca Rider For the Salisbury Post ENOCHVILLE — A local church is choosing forgiveness after vandals marred its grounds and damaged dozens... read more