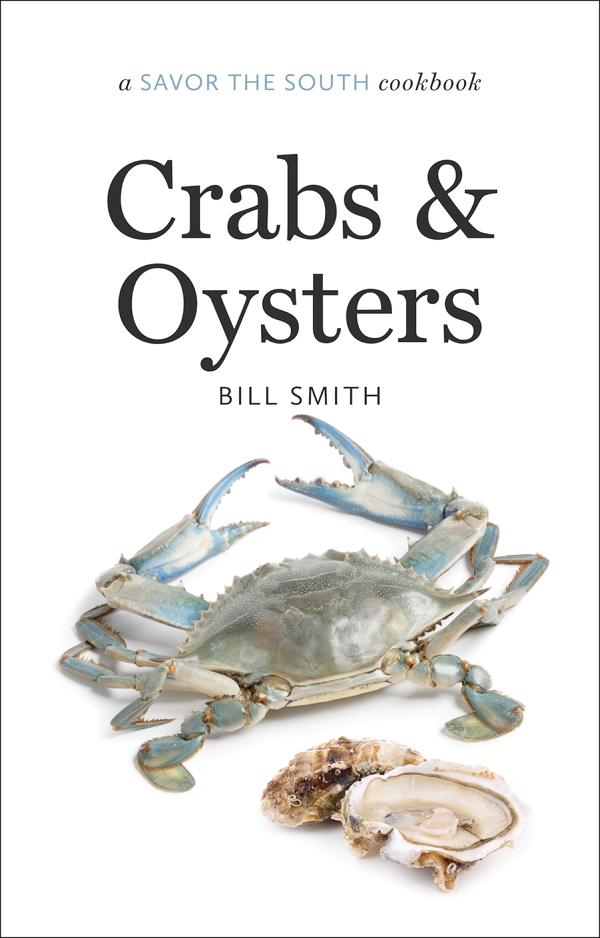 Just in time for the R months comes "Crabs & Oysters" by Bill Smith, part of the Savor the South cookbook series.

R you ready for crabs and oysters? What? Another cookbook? Already?

Yes, and for an excellent reason. “Crabs and Oysters” by Bill Smith has been released just at the right time. It’s an R month, and you know shellfish is best in R months, so SeptembeR, OctobeR, NovembeR, DecembeR, etc.

And when you have a chef like Bill Smith, of Crook’s Corner in Chapel Hill, writing a cookbook for you, you know you’re going to get authentic Southern food.

Smith was born and raised down east and grew up catching crabs and shucking oysters. He remembers people digging pits in their backyards for oyster roasts.

For this book, he traveled his beloved coastline and read regional cookbooks and sought heirloom recipes. He unearthed church and community cookbooks, which he calls the “true repositories of southern cooking culture.”

The result is a collection of recipes that are familiar and easy and tantalizingly different.

Two recipes that sound odd, Crabmeat Cobbler and Oyster Shortcake, are not meant for dessert. The cobbler is a crabmeat casserole with cheesy drop biscuits on top and the shortcake is, as Smith describes it, “oyster stew on toast” except it’s on biscuits. Maybe more like biscuits with oyster gravy.

Smith remembers catching crabs with chicken necks in local waterways. Oysters, he said, were usually a gift to his father, who worked for the post office.

Smith is careful to note what official government organizations say about handling oysters. Their advice is never to eat them raw. Smith’s advice is to not eat raw oysters unless you shuck it yourself or know where and when they were shucked. Pretty good advice there. Buy from a seafood seller you trust.

About the crabs in his book— they are the North American blue crabs. He offers advice on the size of crabs, what the various forms of crabmeat are and points out that the crabmeat you buy in a container is cooked, not raw.

He even tries to explain how to clean a live crab. If you’re the squeamish type, just skip this. It’s not something every home cook can do.

And he does the same for opening and serving oysters. Less complicated, but ti does require a bit of finese and there’s no eyes staring back at you. An important pointer is not to cook oysters for long, or they become, well, rubbery.

As another in the Savor the South cookbook series from University of North Carolina Press, this entry is another little jewel in the collection.

Smith even throws in a couple of cocktails that include an oyster.

And you know what they say about oysters …

All recipes are from “Crabs & Oysters: a Savor the South” cookbook by Bill Smith. Copyright 2015 by the University of North Carolina Press. Used by permission of the publisher. www.uncpress.unc.edu

This delicious little recipe is as simple as can be, and you’re likely to have all the ingredients except for the crab in your kitchen any time.

Makes 10 or so servings

Carefully fold all of the ingredients together, taking care not to break up the crab too much. Cover and chill for at least 1 hour. Serve with Ritz crackers.

This recipe is a happy accident. When I come home from a trip to New Orleans, I try to make a quick pass through the French Market on my way to the airport to see what’s what. On one such visit I grabbed up lots of those local brand-name products that Louisianans love but are not found anywhere else. One was a seafood breader. I used it to fry flounder. The box was already in the trash before I realized how delicious it was. I fished it out of the dumpster. It revealed that it contained corn flour instead of cornmeal, which is traditional here. Thanks to the Latino grocery store around the corner, the corn flour was eventually replaced by Maseca, which is corn flour milled especially for tamales. This improved the recipe even more. Because I love crust on fried foods, I always use self-rising flour in my breadings. It gives a good puff when cooking. I serve these with Basic Cocktail Sauce or Tartar Sauce. Lately I’ve taken to Sriracha sauce stirred into mayonnaise until it is the color of Thousand Island dressing.

Combine the flours, salt, and pepper in a bowl. Taste to make sure that it is seasoned to suit you; set aside.

In a straight-sided saucepan, heat the oil to 365°. The oil should be deep enough to float the oysters. If you don’t have a thermometer, you can test the oil temperature with fair accuracy by dropping a little of the breading in it. If it sizzles, the oil is ready. Drain the oysters.

Working in batches so as not to crowd the oysters in either the breading bowl or the frying pan, toss the oysters in the breading and then transfer them to the oil. Fry for a minute to a minute and a half at most. They should float and be pretty and brown when done. Let the oil recover its heat between batches. Drain the oysters in a bowl lined with a clean kitchen towel, then dust with sea salt.

Serve at once with lemon wedges and a favorite sauce.

This is ready in about three seconds. You can adjust the amounts of horseradish or Tabasco sauce to suit your need for spiciness. This is also good with any kind of fried seafood.

Mix everything together and refrigerate until needed.

By Susan Shinn For The Salisbury Post KANNAPOLIS — Stepping into the N.C. Music Hall of Fame is like stepping back... read more