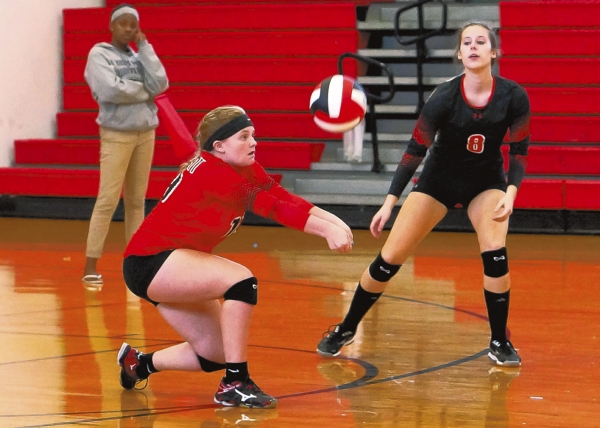 SALISBURY — “That’s out!” yelled Salisbury libero Abby Lee, as she pointed toward the wall of the SHS gym.
Lee was right. An attempted Thomasville spike was long by an inch and the Hornets racked up one more point. They rolled, 25-10, 25-13 and 25-9, in CCC volleyball on Tuesday.
“I can always watch a ball coming in and determine if it’s in or out by the height,” Lee said. “That one was too high to stay in.”
The sharp-eyed Lee switched her sights to Thursday’s home showdown with West Davidson 10 minutes after Tuesday’s breezy romp was in the books.
Salisbury and West Davidson are both 3-0 in the CCC and tied for first. Salisbury won the league with a 9-1 record last year, but the Green Dragons, who have won or shared eight of the last 10 CCC titles, are a traditionally stout program.
“We’re defending the championship we won last year,” Salisbury coach Mallory Hodge said. “That should make us want it even more this time.”
Salisbury started out 0-7 this season, but the Hornets stuck together through some disappointing losses and made adjustments. Now they are 5-11 overall.
“It took some time to start working together,” Lee said. “But when we got to the games we needed to win, we won them.”
One of the games Salisbury couldn’t afford to slip up in was Thomasville (3-12, 0-3).
The Hornets didn’t. They were never in danger.
“We kind of chilled at times,” said Salisbury Juliana Anderson, the 2014 CCC Player of the Year as a sophomore. “But we realize we’ve got to keep working. We can’t get cocky because we’ve played better lately. We can’t starting thinking, ‘Oh, we’re really playing good.’ West Davidson is going to be a tough match.”
The Hornets, who played without setter Lora Withers (knee) got off to a fast start in each set against Thomasville. They led 5-0 in the first set, 12-0 at the outset of the second set, and 5-0 in the third set.
Anderson was rarely challenged at the net and had 12 kills and seven blocks. Makayla Dillon had 11 assists and three aces and served 16 times without an error.
“Thomasville has some tall, strong girls that can hit,” Hodge said. “But we’ve got a good mix of old and young. I wish we’d won more of our non-conference matches, but our schedule was good preparation for the CCC season.”
Anderson had four consecutive kills in the second set, while Dillon served back-to-back aces early in the third set.
Lee had six digs — plus a lot of good verbal calls.
“Abby always passes to target and she just knows a lot,” Hodge said. “She’s played her position so long that she know where every ball is going.”
Lee’s father, Brian, is the PGA professional at Warrior Golf Club. Not surprisingly, Lee’s older siblings, Allison and Alex, made their mark at Salisbury High in golf.
Abby has chosen a different road.
“I’ve watched golf a long time,” she said with a laugh. “I wanted to try something new.”

CHINA GROVE — It was cool and the wind was brisk at Warrior Golf Club on Monday, but Salisbury’s Grace... read more