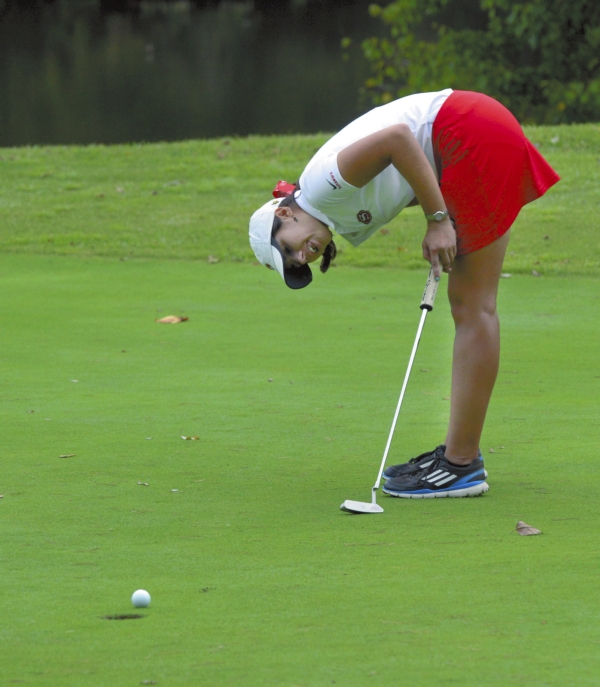 Salisbury"s Grace Yatawara doubles over after her putt on the 18th green stops short of the hole in the Rowan County Girls Golf Tournament at the Warrior. photo by Wayne Hinshaw, for the Salisbury Post

CHINA GROVE — It was cool and the wind was brisk at Warrior Golf Club on Monday, but Salisbury’s Grace Yatawara shed her jacket on the 15th tee and got down to serious business in short sleeves.
“Well, what I was doing wasn’t working so well,” Yatawara said with a laugh. “I was thinking, ‘Well, maybe things will go better without the jacket.'”
The jacket came back on after a frustrating three-putt, but most of what Yatawara did worked just fine. She shot 2-over 73 and settled the individual title at the Rowan County Championships with an Oh-my-gosh eagle on the par-5 No. 17 hole that plays 392 yards from the red tees.
Yatawara crushed her drive on the 17th with a 5-wood, needed only a pitching wedge to reach the green in two and smoothly rolled in a 15-foot putt. She showed the level of talent that makes it easy to see why she’s an East Carolina commit.
“Three of the best shots I had all day,” she said. “That was a good hole for me. It helped make up for that double-bogey on 11. I was striking the ball well, driving well, but I gave away a few shots on approaches and didn’t make a lot of putts.”
Yatawara, who made birdies on No. 9 and No. 13, was playing in a threesome with Carson’s Micah Furr and South Rowan’s Lea Morris. They started their round on No. 3.
County champion for the second year in a row, Yatawara rarely found trouble — except on the par-4 11th.
“I drove into a bunker,” Yatawara said. “I was only about 70 yards from the green, but hitting from a bunker at that distance is not the most comfortable shot. First, I hit behind the ball, and then I hit short. I chipped within 7 feet and still should have bogeyed, but I missed the putt.”
In recent seasons, the county tournament has been a friendly duel between Yatawara and former teammate Isabella Rusher, now a freshman at Richmond. Yatawara prevailed last year at Corbin Hills with a 71, while Rusher shot 73.
Yatawara didn’t have Rusher to push her Monday, but Furr, runner-up with an 82, did a decent job of pushing, at least until Yatawara’s brilliant eagle provided separation.
Furr made an eagle of her own on the No. 4 hole, a short, 270-yard par-5 from the red tees. Furr often drives as far as Yatawara, although not always as straight. Furr overpowered the No. 4 hole with a blistering 3-wood off the tee, a perfect chip and a firm putt.
“There was some grass standing up on the green in front of my ball, but that was one of the putts I made,” Furr said. “I could’ve scored a lot better, but I’m happy. That 82 was the best round I’ve ever had for 18 holes.”
Salisbury has won the girls county tournament every season it’s been played and Yatawara is a special player, but there was pre-tournament talk that Carson might challenge the Hornets if Salisbury’s No. 2 and No. 3 players Caroline Parrott and Shelby Holden didn’t have a good day.
That didn’t happen. Parrott shot a personal-best 88 in tournament play for third place. Holden shot 93 and tied Carson’s Adison Collins for fourth.
Parrott shot 98 in the county event last year, while Holden shot 101, so they’re getting better.
Salisbury’s winning score was 254. Carson was 34 shots back at 288. South Rowan shot 320 to edge East Rowan’s 321. A young West Rowan team shot 337.
This fall is shaping up as the last hurrah for the Hornets, a legitimate dynasty that may not even field a team next season.
They have only three players — all seniors, albeit three seniors who have played in big-stakes matches.
Salisbury has been the state’s strongest 2A program for a solid decade. Besides winning the last four 1A/2A state titles, The Hornets won 1A/2A/3A in 2005 and 2006. From 2007-10, a 3A school won the state 1A/2A/3A crowns, but the Hornets always were the highest finisher among the 2A teams.
“If this is it, we want to end it with a bang,” Holden said.
Holden got things started for the Hornets and the county on Monday when she hit her tee shot on No. 2.
“I started slow and was getting a little down on myself,” Holden said. “I had a few triples and thought I was going to shoot in the low 50s on the front nine, but then I parred a hole and bogeyed a hole and that got my spirits back up.”
She shot 47-46 and finished strong. That was more than good enough.
Parrott and Holden played the bunker-laden Warrior course on Sunday. That boosted their confidence.
The key hole for Parrott was the par-3 No. 12 where she made a birdie.
“I chipped in from off the green,” Parrott said. “I’d just triple-bogeyed 11, so that was a big turnaround emotionally. It was exciting to shoot 88.”
Carson’s third scorer was Hannah Cargill (113).
Leading South Rowan with a 97 was Lea Morris, who finished sixth. She made a birdie on No. 3, her first hole of the day.
Finishing seventh to pace East Rowan was freshman Camryn Corriher, who shot 104. East’s Micah Loper shot 106.
West Rowan’s best score was 110 by Maddie Owen.
The all-county team will include Yatawara, Furr, Parrott, Holden, Collins, Morris and Corriher.
A complete score list is in Scoreboard.