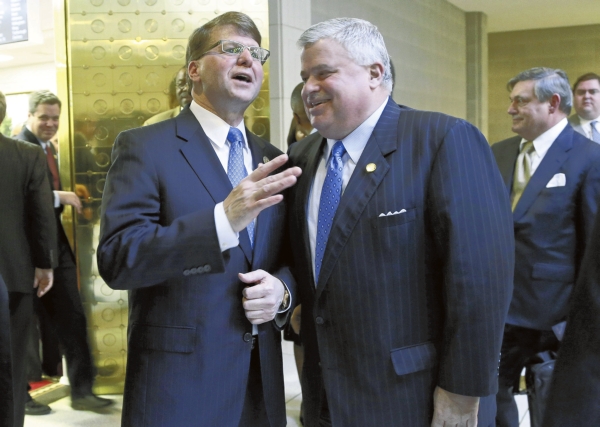 Patrick Gannon: Does ‘getting it right’ really have to take so long?

RALEIGH – A top state senator told reporters last week that the General Assembly could have moved faster this year, both on the state budget and on the 2015 legislative session, which began back in January.

“I’ll be one of the first to admit that, even on the budget process,” said Sen. Tom Apodaca, a Hendersonville Republican and Senate Rules chairman. “But we didn’t, and we are where we are.”

Where we are is toward the end of September, eight months into session, with several major issues still outstanding, including legislation related to Medicaid, economic incentives, an infrastructure bond referendum and the date for the 2016 presidential primary. Gov. Pat McCrory signed the state budget late last week, two and a half months after the start of the 2015-16 fiscal year.

The House met for its 129th legislative day Monday, while the Senate worked its 131st day.

So how did we get here? A number of reasons, which, when combined, led to one of the longest sessions in recent memory for this part-time Legislature.

First, the state had a $445 million surplus going into this fiscal year, which started July 1. Apodaca said it’s always more difficult with extra cash on hand.

“And I was told that by the previous (Democratic) administrations,” he said. “It’s easier to govern with a deficit because you can say no. Now, when you have a surplus, everybody wants something.” (See future column on pork in state budget).

Second, lawmakers took weeklong spring and summer breaks in April and again in July to get a breather and spend time with their families.

“We’ve gotten ahead, and I think the break is well-deserved,” House Speaker Tim Moore said in April.

Third, the original House and Senate budget spending totals were far apart, approaching $1 billion. While the two chambers settled between the two numbers – at $21.74 billion – the difference made negotiations more difficult.

“When you have $900 million difference, that’s a lot of give and take to work through to come up with a compromise,” said Sen. Harry Brown, a Jacksonville Republican and the Senate’s top budget writer.

All of the above reasons played roles in prolonging the budget negotiations and this session in general. But the top reason the budget process and this session are taking so long is the fact that so many policy issues – 429 pages worth in the final budget – were left to the tail end of session and discussed as part of the budget. Some of them could have been debated and passed – or not – long before September, maybe during one of the vacations.

Senate leader Phil Berger told fellow lawmakers that the reason for the late budget is that it dealt with significant issues “that have been nagging at us over a number of years.” He cited Medicaid changes, tax policy changes, the ending of transfers of highway dollars to the general fund and relief to rural areas.

Berger also said economic development legislation and the proposed $2 billion bond referendum were tied to the budget discussions. “We’re concerned about the length of time, but the more important thing is we get it right,” Berger said.

Time will tell whether they did.

So if legislators take their time on the budget – and bring into that process a myriad of other issues as budget bargaining chips or for some other reason – this is always going to be a possible outcome.

As Tom Campbell pointed out in a column for NC Spin last week, the length of this session makes a pretty good case for session duration limits and more definitive budget deadlines for the General Assembly to meet.

And it’s quite probable that bills will be filed next year to try to do those things, using what happened this year as an argument in favor.

Thanks, Salisbury Police Dept. As a volunteer delivering meals for the Meals on Wheels Agency,  I would like to share this.... read more