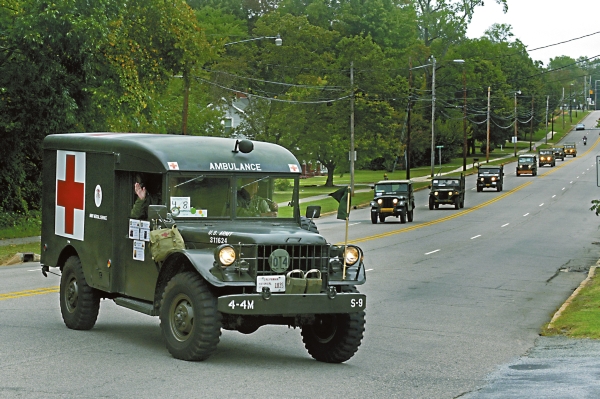 A vintage military ambulance leads a line of jeeps onto the grounds of the N.C. Transportation Museum in Spencer on Monday. The military vehicle convoy stopped for a visit at the museum and lunch. The Military Vehicle Preservation Association is conducting the 95th Anniversary Convoy along the Bankhead Highway route, retracing a convoy first conducted in 1920. Wayne Hinshaw/For the Salisbury Post A vintage U.S. Navy staff car is among the vehicles in the convoy. Wayne Hinshaw/For the Salisbury Post

SPENCER — For the past seven weeks, Dan and Sabra Seaborg have been living in their 1968 Vietnam War-era Kaiser Willys ambulance, taking in America at about 35 mph.

Since Saturday in particular, they have been part of the Bankhead Highway Historic Military Vehicle Convoy, which is going from Washington, D.C., to San Diego, Calif. When the Seaborgs finally return to their Lake Tahoe home, the couple and their two dogs, Jeep and Cinnabar, will have been on the road in their boxy ambulance for three months.

Dan Seaborg says the camaraderie on this unique convoy is great. Military vehicle enthusiasts from around the world are participating in the 29-day, 3,300-mile trip, and they have a lot in common with one another.

But Seaborg said the journey also restores one’s faith in America, especially when military veterans show up to see their vehicles and talk about them at the many stops along the way.

“You can’t not cry when they come out,” Seaborg said. “We owe our veterans so much.”

The convoy, which in some segments will have as many as 65 historic military vehicles, retraces the 1920 U.S. Army Transcontinental Motor Convoy route along what was known as the Bankhead Highway.

Some 40 convoy vehicles stopped in Spencer at the N.C. Transportation Museum for a couple of hours Monday afternoon before heading on for an overnight stay at Charlotte Motor Speedway.

The 1920 convoy met tougher going than it expected, especially through the Deep South and in the sands of Arizona. It ended up averaging only 30 miles a day. That convoy had come on the heels of the 1919 U.S. Army Transcontinental Motor Convoy that went from Times Square, N.Y., to Lincoln Park in San Francisco and generally followed the Lincoln Highway, the first transcontinental highway for automobiles in America.

Both of the convoys’ difficulties showed Americans the need for better main highways and ended up building support for local, state and federal funding of roads. As an Army soldier in 1919, Dwight D. Eisenhower, the future commander of the Allied Forces in World War II and later president, was part of the Lincoln Highway convoy.

Eisenhower was so influenced by that trip across America and Germany’s Autobahn in World War II that as president he pushed for the Federal Aid Highway Act of 1956, leading to construction of America’s interstate highways.

The Military Vehicle Preservation Association organized the Bankhead Highway Convoy. The association previously sponsored convoys on the Lincoln Highway in 2009 and the Alaska-Canadian Highway (ALCAN) in 2012.

Randy Bennett, an association member from Ohio, said the military vehicle collectors are trying to follow what was the Bankhead Highway as closely as possible, but much of the original route has been built over and supplanted.

Bennett and his twin brother, Rick, actually are riding with the convoy on their identical 1972 Honda motorcycles. Randy Bennett recently sold his 1952 M-37 Dodge three-quarter-ton truck to two guys from New Zealand, and those collectors are driving the truck all the way to San Diego before they eventually transport it to Los Angeles and ship it to New Zealand from there.

“We just kind of go ahead of them so they know they have a place to park and pull over,” Rick Bennett said.

Randy and Rick Bennett are spending 12 days with the convoy before they leave in Arkansas and head back to Ohio, where Rick repairs Porsches and Randy owns a print shop. Rick said he also rides vintage dirt bikes and builds and flies World War I-style planes.

The Military Vehicles Preservation Association is trying to schedule similar convoy trips every two years. In 2017, the association will take on Route 66; in 2019, it will go back to the Lincoln Highway for the 100th anniversary of that route.

On this particular convoy, the association has participating members from across the United States and countries such as Canada, Belgium and New Zealand. The military vehicles range in age from World War II to modern day and include Jeeps, staff cars, transport trucks, cargo trucks, vans, utility vehicles and more.

“It’s amazing how good a shape they are, and the guys are really good mechanics,” Randy Bennett said.

Randy Bennett said since he has now sold his 1952 M-37 to the New Zealanders, he will be in the market. “I’m going to start over again with something else,” he said.

Karl Hosterman and Becky Beard, who are from State College, Pa., will be traveling with the convoy in their 1986 M1009 (a Chevrolet Blazer) to Birmingham, Ala., before they head back for home.

Hosterman said he likes his M1009 because it’s easy to work on, most of the parts are readily available, and “you can drive them where you want to,” his convoy friend Dr. Michael Popernack chimed in.

“And they look good,” Hosterman added.

Popernack, a dentist, and his wife, Carol, smile when you ask how many military vehicles they own. As they counted in their heads during their stop in Spencer Monday, they quickly reached 14. Likewise, Hosterman, an Air Force veteran, has collected a host of military vehicles.

“We’re slightly obsessed,” said Michael Popernack, who personally was never in the military.

“I’ve always liked history, and I come from a military family,” he said.

Hosterman said the convoy seems to go through small towns with a lot of shared American values. “The nice thing about it is the spirit of the local towns,” he said, whether it’s just people waving along the side of the highways and streets or coming to visit them when they stop.

The convoy received a lot of attention in South Hill, Va.

“It was like the whole town turned out,” Hosterman said.

The convoy generally travels at a pace of 35 mph, and Popernack said, “I can’t think of a better way to see America.” He and Carol are driving a 1984 M1010 Chevrolet Army ambulance. Their travel companion is their cat CARC, the acronym for chemical agent resistant coating, which many modern-day military vehicles receive.

Seaborg said his 1968 vehicle is a Vietnam ambulance on a Jeep body. During the Korean War, the same basic box would have been on a Dodge frame. “Everybody looks at it and thinks it’s a M.A.S.H. vehicle,” Seaborg said.

He also was part of the tough 4,100-mile ALCAN Highway convoy in 2012, when his wife was in a camper-truck support vehicle. It rained or snowed almost every day, Seaborg said.

Seaborg restored the Army ambulance, which had been in the back lot of a casino in Reno, Nev., and not driven for 18 years.

Since the couple left Lake Tahoe, they’ve had to replace a fuel pump and U-joint and two of their five tires have had issues. Military vehicle enthusiasts are usually prepared for most any kind of breakdown.

How does the ambulance ride?

Seaborg described it as “not very fast, but pretty comfortable.”