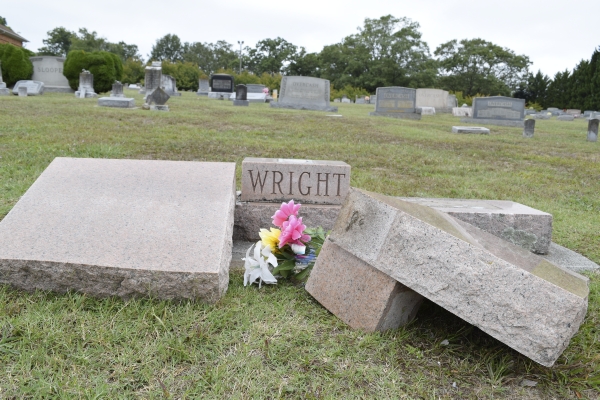 Headstones damaged in St. Enoch Lutheran Church's cemetery over the weekend were a mix of old and more recent markers. Photo by Rebecca Rider ENOCHVILLE — A local church is choosing forgiveness after vandals marred its grounds and damaged dozens of headstones in the church graveyard.

Sunday afternoon the congregation at St. Enoch Lutheran Church off of Campbell Road discovered that gravestones had been knocked over and broken sometime between Friday afternoon and Sunday morning.

The Rev. Dale Cline, pastor, estimates the number of damaged graves is around 37. Many of the broken markers are older, from around the time the church was founded in 1835, or even earlier.

Many of the headstones are torn out of the ground, and the breaks show a stark white against the old, weathered stone.

But not all of the headstones that were vandalized were old. Many are recent and are still being taken care of by the deceased’s family.

Cline says the first reaction many felt was anger, but he and his congregation are moving past that.

“We’re a church,” he said, “We have to think about forgiveness.”

Cline has been taking a leaf from the biblical church of Philadelphia, from Revelation, and the command to bless those who persecute you. Instead of giving sway to anger, a reaction that is rooted in fear, Cline and the congregation of St. Enochville Lutheran have chosen to see this as an chance to reach out to the community.

“There’s a door open,” he said, “There’s an opportunity.”

Clines says that the vandalism is part of a pattern of violence he sees in the community that he believes is rooted in a feeling of worthlessness or hopelessness.

“I think the community feels that they’ve lost a lot,” Cline says.

And, Cline theorizes, that causes them to feel powerless and gives them the urge to take out their frustrations on someone, or something, that can’t fight back. Like a grave.

He believes the acts to be the work of teenagers, who are often caught in the back parking lot spinning doughnuts, or skateboarding on the front walkway. But it’s given Cline and his congregation a new determination to reach out, discover the needs in their community, and fill them as best they can.

In the meantime, there’s a lot to be done. The broken stones need to be repaired as best they can, a job that Cline estimates will take weeks. The money for repairs will come from the perpetual care fund for the cemetery.

And though forgiveness is the goal, Cline is very clear that this behavior will not be tolerated again and that the church is seeking justice because it is a crime.

Motion detectors and security cameras have been set up around the church grounds in the hopes of catching the vandals should they strike again. But if they do, the church will respond the same way: not with fear, anger, or retribution, but with love.

By Mark Wineka mark.wineka@salisburypost.com SPENCER — For the past seven weeks, Dan and Sabra Seaborg have been living in their... read more