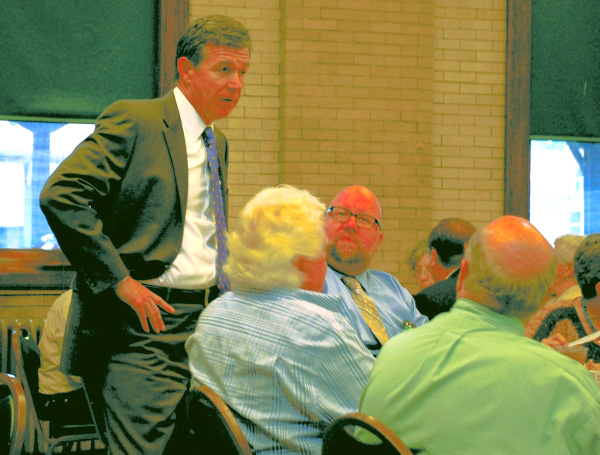 SALISBURY — N.C. Attorney General Roy Cooper, a Democratic candidate for governor, harkened back to the days of governors Terry Sanford and Jim Hunt Monday night in saying he could advance those kinds of beliefs again and, with North Carolinians’ help, do it even better.

Speaking to more than 100 Rowan County Democrats at Salisbury Station, Cooper painted a picture of a Republican-led state government turning its back on North Carolina’s long-held public educational values.

The two-term attorney general said he has never seen morale so low among educators. And it’s not just a matter of low pay that North Carolina is losing good teachers, Cooper said, charging they are leaving because of the lack of basic respect they have seen from “this governor and this legislature.”

It’s a Republican governor and legislature that does not value education, he said.

Though he did not mention Gov. Pat McCrory by name, Cooper said when the governor talks about The Carolina Comeback, “I think he’s got the wrong Carolina.”

Cooper met earlier with some of the county’s major Democratic donors. At the dinner, Rowan County Democrats again were encouraged to make donations to Cooper’s campaign and support the local party in general.

In advance of Cooper’s appearance in Salisbury, the N.C. GOP issued a statement anticipating some of the points Cooper might cover. It described Cooper as “a 30-year Raleigh insider who is a relic of the broken state government system of the past.”

“He says he supports the middle class and education, but voted to cut funding for public education and increase taxes by billions of dollars when he was in the legislature,” the GOP statement said.

“On the other hand, Gov. McCrory has delivered $4.4 billion in tax relief, committed over $1 billion in new funding for higher teacher salaries and increased education funding to an all-time high.”

The GOP charged Cooper of campaigning with “false talking points.”

Cooper described North Carolina as a state whose government was once devoted to its public schools, community colleges and state university system, which in turn led to things such as a thriving middle class, banking industry and Research Triangle Park.

“Now we’ve seen what has happened in the last three or four years, and it’s not good,” Cooper said.

The attorney general described tax cuts that have benefited corporations and the wealthy and a state government guilty of turning its back on federal health dollars.

He said there are “a long list of things voters are frustrated with, including the lifting of safeguards for clean air and water, detracting from renewable energy, making it harder for people to register and vote and delivering unfunded mandates to local governments.

Cooper said he was tired of hearing North Carolina being made fun of on late-night television shows.

Overall, Cooper described himself as motivated, optimistic and a candidate ready to fight for education and racial fairness and harmony. He said his administration would not be the haves vs. the have-nots.

Rather, it will stress, “We are better off united.” Cooper said.

“We have to pull this state together and move forward,” he added.

At the election box, Cooper has had success in Rowan County. In the 2008 general election, Cooper was the only Democrat on the state ticket to win Rowan County.