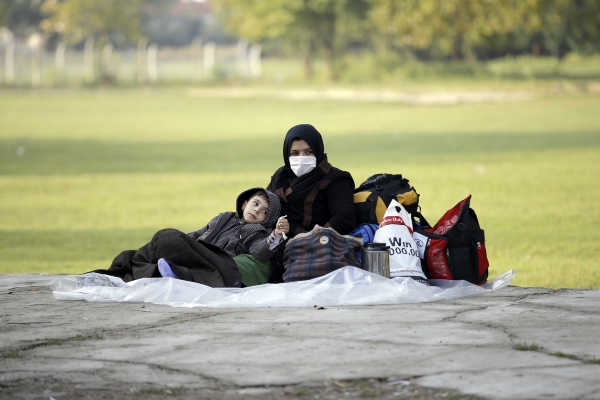 Migrants rest in a stadium used for traditional Kirkpinar Oil Wrestling, waiting to cross to Europe near Turkeys western border with Greece and Bulgaria, in Edirne, Turkey, Tuesday, Sept. 22, 2015. The migrants were stopped Friday by Turkish law enforcement on a highway near the city of Edirne, causing a massive traffic jam.(AP Photo/Emrah Gurel)

1. WHAT MESSAGE POPE PRESSES IN CUBA

Francis, who will arrive in Washington later today, encourages Cubans at a delicate point in their own history to overcome ideological preconceptions and be willing to change.

With bitterness and division in the air, its two emergency meetings this week won’t provide any quick solutions to ease the plight of tens of thousands of people seeking sanctuary in Europe.

There could be some awkward undercurrents when the Chinese president is honored with a state dinner at the White House on Friday.

The demise of his presidential campaign is brought by just about everything: financial troubles, a bloated staff, repeated stumbles and flip flops.

Their push toward the capital against Shiite militants is stalled by no gains on the ground — despite an airstrikes’ campaign by a Saudi-led coalition that relentlessly pounds rebel positions.

The company says some 11 million diesel vehicles worldwide were fitted with software at the center of the U.S. exhaust revelations.

7. WHO FINALLY APOLOGIZES FOR SALMONELLA OUTBREAK

“All I can do is come before you and ask for forgiveness from you and the people back here. I’m truly sorry for what happened,” says the former Peanut Corporation of America owner, who is sentenced to 28 years in prison.

The victims are a Norwegian resort manager, two Canadians and a Filipino woman, the military and police say.

9. KENTUCKY CLERK COULD HEAD BACK TO COURT OVER LICENSES

Lawyers for two gay couples and two straight couples question the validity of the new marriage documents and ask a federal judge to order Kim Davis’ office to reissue them.

Advocates see success in the most visible result so far — many more students in charter schools.