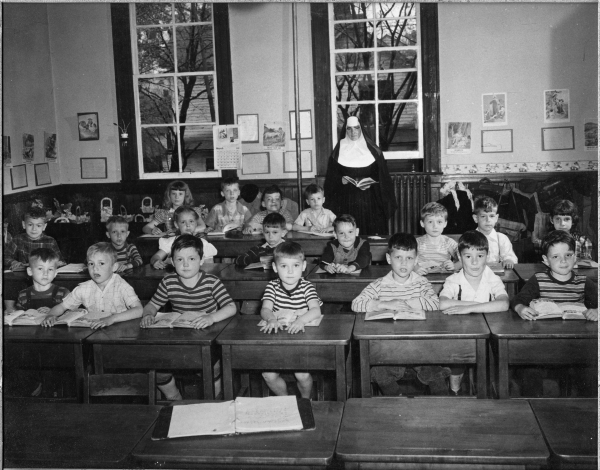 Joe Williams of eastern Rowan County provided this photograph of the first grade at Sacred Heart Catholic School in Salisbury in 1947. He recalls Sister Mary Paul, standing in the back, had told all the children to clear their desks and place their notebooks under their seats in advance of the class photograph. Williams, the boy in the first row at the far right, confesses his notebook was still out and sitting on a desk at the front of the photo. Sister Mary Paul was principal of the school, in addition to being the first-grade teacher. The school included eight grades, and some of the classes were a combination of a couple of grades. Williams said he transferred to Granite Quarry School in the fourth grade. Williams can still name several of the children in this photograph. In the first row, left to right, are Eric Menius, not known, Ronald Thomas, not known, Tommy Sizemore, Eddie Pring and Joe Williams. Second row, from right to left, are Mary Mauldin, Charles Goldman, not known, Jimmy Fleming, Richard Bradshaw, not known, Ronnie Mahaley and Max Seigal. In the back are, left to right, are Jane Bare, not known, Tommy Zum Brunnen, not known and Sister Mary Paul.