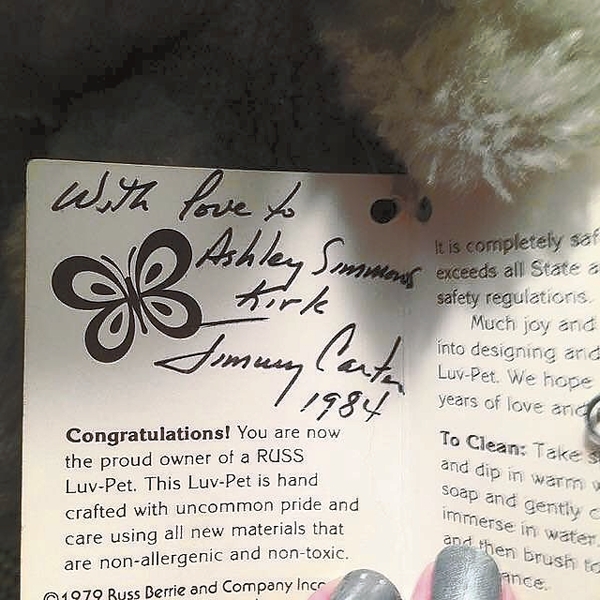 The tag on a toy elephant signed by President Jimmy Carter in 1984.

When Jimmy Carter signed an elephant

As all Americans pray for the healing for former President Jimmy Carter in his battle against cancer, I believe it may be of interest to share a personal experience which illustrates his character.
In late 1984, I boarded a commercial flight from Atlanta to Washington, DC.  I spotted the former president and first lady on the front row of the plane as I boarded but did not want to “bother” them.  When I found my seat at the back of the plane, I sent my business card which highlighted my position at the time as chief of staff for Congressman Jim Broyhill. I knew that Congressman Broyhill, as the ranking minority member of the powerful House Committee on Energy and Commerce, had worked with President Carter on energy issues. I also wrote on the card that I was a third-cousin of the Commissioner of Agriculture Jim Graham, whom I knew to be a friend of the president.
Minutes later I saw the President walking down the aisle, shaking hands with all the passengers. When he got to me at the back of the plane, I told him I was the one who sent the business card to him.  Other than that, I was at a loss as to what to say to the president of the United States.  So I asked him where he was going; he responded that he was going to see a new grandchild in the DC area. I told him that my wife had given birth to a brand new daughter, Ashlee.  Further I told him that I had a stuffed elephant for Ashlee and would like for him to autograph it. He responded that the Secret Service did not like for him to sign autographs but if I would send the elephant to him by the flight attendant, he would be glad to sign it.
So I did and I could that see that he actually signed the elephant to Ashlee … no signature pen, no signing his name by someone else.  After working in two governor’s offices and a congressman’s office, that was a big deal!
Shortly thereafter, Jim Martin became governor of North Carolina and we moved back home to Raleigh.  We received a phone call that our home in Arlington had been broken into. My late wife, Margaret, and her mother went back there to survey the damage. I called them upon their return with one question, “Did they get the elephant?”  The answer was “no.”
So now Ashlee has perhaps the only elephant in the world actually autographed by the president of the United States, Jimmy Carter, a Democrat!  We should all pray for his recovery from cancer.
Phil Kirk lives in Raleigh
You Might Like

Golf tournament was great Kudos to the Country Club! What a wonderful Labor Day Golf Tournament! The fine folks at... read more