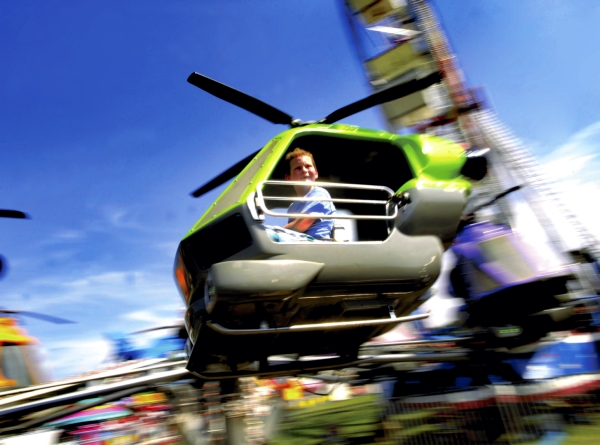 Seven year old William Flowers on a helicopter ride at the 2014 Rowan County Fair. photo by Wayne Hinshaw, for the Salisbury Post

Get ready for Ferris wheel rides, farm animals and your favorite deep-fried treats.

The 64th annual Rowan County Fair opens Friday, Sept. 25, for eight days of old favorites along with new attractions that organizers say will be a hit with fair-goers.

Fair manager Johnny Love said this year’s fair will be the first to make use of new exhibit halls built at the fairgrounds.

“The new exhibit halls have heating and air conditioning,” Love said, as well as new restrooms.

There are more amusements this year — 31 rides in all in addition to concession stands and midway games, Love said.

One longtime Rowan County Fair favorite, the demolition derby, is back this year on Saturday, Oct. 3. The derby is set to start at 8 p.m., followed by a fireworks show at 11 p.m.

Love said that the economy, of all things, is the reason why the popular car-wrecking competitions were canceled for several years.

“Scrap metal got so expensive that people would sell those big old cars to the salvage yard before they’d make a derby car out of them,” Love said.

“Right now, the price of (scrap) metal is about half what it was, so we should have a good amount of cars,” Love said. He said that, as of Sunday, there were 25 entries signed up.

This year’s fair starts a week later than usual, because the fair is scheduled based on when Labor Day falls on the calendar.

“We’re hoping for cooler weather this year,” Love said. “And, as much as we need rain — you know, the farmers really need it — we still hope for nice weather for the fair.”

The lack of rain this summer has taken its toll on contest entries. Love said farmers and gardeners have been hurt by the drought, and have told fair officials they don’t have as much produce that’s fit to enter.

“Field crops have been devastated because of the drought,” Love said.

In addition, he said, fewer young people are taking part in the traditional horticulture, food preserving and and baking contests.

But there will still be plenty of agriculture at the fair, Love said, including animals from Lazy 5 Ranch and livestock competitions.

And that’s important, Love said. “Most kids don’t know where our food comes from,” Love said. “Kids need to be able to see the animals in the barn, and to know that corn doesn’t come from Food lion. A farmer had to grow that.”

In addition to education, the fair is about fun for kids and families.

This year, in addition to circus shows and the children’s barnyard, there will be strolling performances and live shows by Hubba Bubba the Clown.

Also new this year is the Fair Burger Throw-Down – a kids’ burger-cooking competition, sponsored by 4-H and N.C. Cooperative Extension.

Kids will be able to season and prepare a hamburger using their choice of seasonings, then have it judged on-site, similar to TV cooking shows’ competitions.

For grown-ups and kids alike, there will be live wrestling shows and other entertainment throughout the week.

A full schedule of events is online at www.rowancountyfair.net.

Love said that the tradition of bringing pre-kindergarten and special needs children to the fair on weekdays will continue, and should give over 1,000 kids a special chance to experience the fair.

And that, Love said, is what the annual county fair should focus on: what he called “good, clean family fun.”

“The more we can get the kids involved in the fair, the better it is,” Love said.