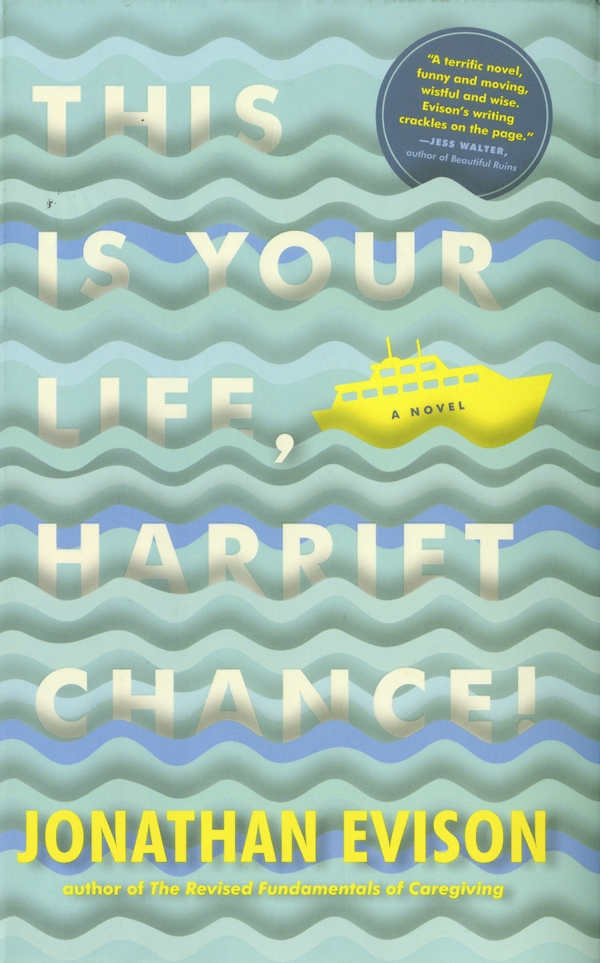 Your life’s a mess, Harriet Chance

Count on Jonathan Evison to tell a different kind of story, this time in a rollicking format that allows him to travel through time and space while he tells us the bittersweet life story of Harriet Chance.

On those shows, a celebrity would be lured to the studio and end up as the featured guest on a live show that was part tribute and part roast.

That’s certainly what Evison does here, starting, as the show did, with fictional Harriet’s birth in 1936. And, hello, here’s Harriet in the second chapter, at 78, in her priest’s office, telling him her dead husband Bernard came to visit her last night.

“There’s but one ghost in the Bible, and we both know who that is,” Father Mullinax tells her.

Next chapter, September 9, 1957, (Harriet at Twenty), “Look at you, Harriet, a grown woman! No longer a glass of milk, but a tall drink of water. Okay, not so tall. Maybe a little on the squat side, maybe a little pudgy, to hear your mother tell it.”

Harriet is determined to have her own car, her own apartment and a real job.

Yes, Harriet had aspirations, ideals, a sense of purpose … for a little while.

Here’s Bernard, 277 days dead, discussing his options with chief transitional officer Carmichael. It seems there’s some hope he might be promoted. He’s got to stop going back to see Harriet.

Bernard says, “But sir, the thing is, she has no idea what’s coming. The shock might be too much. I gotta get to her. I gotta explain.”

That’s the wide open screaming clue as to what’s going to happen later on. Why did you wait, Bernard?

Evison showcases Harriet’s life in short vignettes. Harriet pooh-poohing the idea of moving into a retirement home. Young Harriet at her job at the law firm. Harriet on the cruise trying to talk to her unemployed ex-addict daughter, Caroline.

As Evison zips back and forth in time with Harriet, he sticks with dead Bernard.

Harriet’s not had a charmed life, despite her ambitions and goals. Marrying the much older Bernard has meant numerous compromises, giving up on her aspirations. but gaining solidity.

When she finally does get back to work, it’s for her father’s former golden boy, Charlie Fitzsimmons, and oh, what demons lurk there. This is the saddest part of Harriet’s story.

Meanwhile, Harriet, at 78, wonders why Bernard bought an Alaskan cruise at an auction. Does she go now, alone?  What was he thinking?

Oh, maybe Mildred will go. Yes, that’s the answer. Except it isn’t. Mildred backs out at the last moment and Harriet, through various dignity-stealing episodes, finally gets on board the Zeiderdam.

What a surprise, Harriet! Here’s Bernard, on the cruise ship with you. And here, Harriet, here’s that letter Mildred’s son Dwight gave you with strict instructions on when to read it.

Let’s look at that.

Oh, Harriet. Oh my, oh my, oh my. How could it be? Oh this is not at all what you expected.

Revenge is a dish best served cold, perhaps with some wine and a few dozen of those fancy crab legs from the buffet. Maybe, after that third, or was it the fourth, glass of wine it was not a good idea to hit the steward with the crab leg.

Oh, bother, Harriet, here’s your needy and disappointing daughter, joining you on the cruise. What is your dear son Skip got to do with it? Why do they fuss so much?

Poor Harriet, so many things going on behind her stiffened back. It’s always been that way. Harriet doing and doing, giving and giving and getting less and less in return.

Some of her decisions? Questionable, at best. What’s been done to her? Horrid.

If only dead Bernard would get to the point. If only Caroline would stop blaming Harriet for everything. If only favorite son Skip were not such a loser.

Evison jumps around in Harriet’s life, telling us the things we need to know, things we wish we didn’t have to know, painting a portrait of a woman whose lines are beginning to blur.

The reader keeps seeing the wrong turns, the odd behavior, the little tragedies and triumphs that make up life.

The second-person narrator brings a tone to the novel that makes it a bit easier to stomach the sadness of Harriet’s life.

But what Evison does here is remarkable.

Everything you always wanted to know about pirates

By Dara L. Cain Rowan Public Library Pirate talk has so many off-sounding words, but isn’t that what makes it... read more