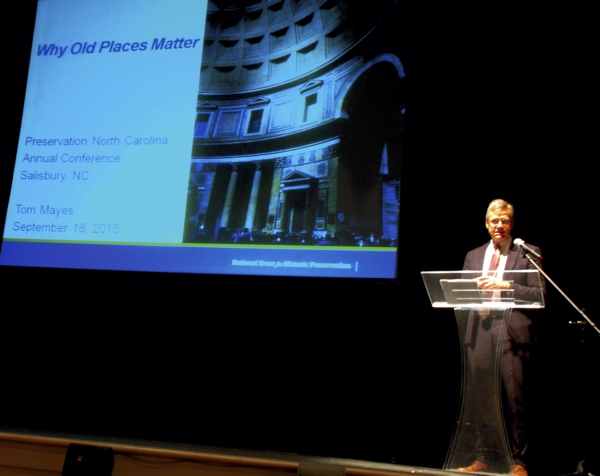 SALISBURY — As Tom Mayes kept delving deeper into why old places matter, he discovered it takes only about a generation before people start to form a sense of identity with a place — even a place such as Eastland Mall in Charlotte.

The man hired to demolish the mall had his own personal attachment to Eastland, and he put a link on his company’s website for others to share their own memories about going to the mall, which wasn’t even 40 years old.

Eastland meant something important to the demolition man because he had met his wife at the mall’s indoor skating rink.

This “individual identity” is one of 14 reasons Mayes listed as why old places matter when he spoke Friday morning at the Meroney Theater, as part of Preservation North Carolina’s annual conference.

Mayes, vice president and senior counsel with the National Trust for Historic Places, has written numerous essays on why old places matter as part of research financed by the American Academy in Rome.

Mayes came up with his 14 reasons by making site visits to historic places, reading articles and books on the subject and conducting interviews with people outside the preservation field — people such as archaeologists, architects, historians, artists, developers, writers and businessmen.

His list of 14 reasons are hardly a set number, Mayes cautioned, because different things resonate with different people. “I ask you to be thinking for yourself — why do old places matter to me and my community?” he told his Salisbury audience.

• Continuity. It’s one of the things Mayes said he heard a lot. Old places give people a sense of being part of a continuum. An emotional bond develops with places, and a sense of stability forms against their ever-changing worlds.

When these places of continuum vanish, people feel a loss of stability. Mayes suggested that urban renewal as practiced in the United States left a record of replacement and destruction that disrupted stability for many people.

• Memory. As people see with Alzheimer’s disease, “without memory, we’re hardly ourselves,” Mayes said. There’s a link between memory and place, both individual and collective.

That collective memory is seen, for example, when people visit the Reflecting Pool in the Mall in Washington, D.C., and imagine having been at Dr. Martin Luther King Jr.’s “I Have a Dream’ speech in 1963.

• Individual identity. Some theorists believe one’s identity and place are inseparable. Places change over time, but a person’s identity often is shaped by those different places.

Many people probably identified with the skating rink at Eastland Mall or something else at the shopping center, Mayes noted.

In the past, too many of those interpretations or reasons have left out whole segments of the population such as slaves, Native Americans, workers and just everyday people, Mayes said. Today, certain sites such as Monticello and Confederate memorials become the vortex for greater understanding and sites generating conversations about the past and future.

Confederate memorials, Mayes noted, can be the lightning rods for broader discussions of race and why those memorials were erected at that time and in that place.

They can be opportunities for a renewal and rediscovery of an all-encompassing heritage, Mayes suggested.

• Beauty. If you Google the word “beauty,” you get old places, Mayes said. Beauty is a deeply positive experience, and old places are a key part of what makes our communities beautiful, Mayes said.

• History. Field trips in school are important, Mayes suggested, because kids tend to understand more about history when they can visit old places, such as historic buildings and battlefields.

• Architecture. Old places matter because of how they make us feel, Mayes said. Architecturally significant or different buildings create certain proportions, harmony and space and embody a spirit of their age, purpose and the people who designed them.

“Even as a kid, I knew that place was different,” Mayes said of the feeling he had with certain places.

• Sacredness. With some old places, people will travel thousands of miles to see them, to experience certain types of sacred feelings, Mayes said. It could be places as varied as churches, cemeteries, schools, battlefields, prisons and old slave trading centers.

• Learning. If you go to Old Salem, you learn about Moravians; Williamsburg, Colonial life; President Lincoln’s cottage, the man. “These are all things we learn simply by the survival of a place,” Mayes said, adding they make unparalleled places to learn.

• Creativity. People are inspired to compose and write by old places, Mayes said. Their imaginations are enriched by old places and their authenticity. It’s no coincidence that many preservation movements were founded by artists and writers, according to Mayes.

• Sustainability. Old places matter because their preservation conserves land, keeps materials out of landfills and reduces the carbon footprint. Mayes repeated a mantra sometimes heard among preservationists: “The greenest building is the building already built.”

Mayes said he doesn’t think preservationists are selling the green values of older buildings enough. In Portland, Ore., the mayor has proposed a $25,000 per unit fee on any building that has to be demolished and an additional $2,000 charge for every year the building was in existence.

The mayor is all about affordability and sustainability, both attributes of older places, Mayes said.

• Ancestry. Old places connect to our ancestors, and it always goes back to the question, “Where are you from?” Genealogy is exploding, Mayes said, and through their connections to family in the past, old places offer people a deep sense of satisfaction and belonging.

• Community. Certain places foster community because they are shared places, and Mayes said the development of a real community takes time. Old places help foster the conditions that make the sense of community happen, Mayes said.

Mayes grew up near Davidson and Cornelius in Mecklenburg County. He earned his undergraduate and law degrees from the University of North Carolina at Chapel Hill.

He said North Carolina remains a place that resonates with him because of the work preservationists have done.