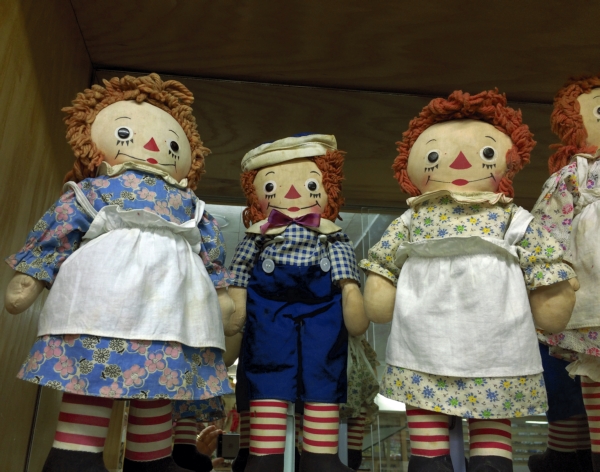 The exhibit features many different Raggedy Ann and Andy rag dolls — some of which are handmade as well as those which have been commercially produced.

It’s been 100 years since American author Johnny Gruelle dreamed up a novel story about a little red headed rag doll. In the small town of Arcola, Illinois, Gruelle created Raggedy Ann for his daughter, Marcella, when she brought him an old hand-made rag doll and he drew a face on it.

Raggedy Ann, now a centenarian, has maintained her popularity over the years. It was on Sept. 7, 1915 that Johnny Gruelle received US Patent D47789 for his Raggedy Ann doll. Just three shorts years later in 1918 Gruelle introduced to the public in the Raggedy Ann Stories. The stories and dolls continue to delight the young and old alike.

In honor of Raggedy Ann’s 100th birthday, Rowan Doll Society members have put together an original display from their personal collections at the Spencer Doll and Toy Museum.

The collection features many different Raggedy Ann and Andy rag dolls — some of which are handmade as well as those which have been commercially produced. All of the dolls except one has red yarn for hair and a triangle nose. In addition to the dolls, the display includes a variety of books, games and trinkets. Many club members feel their love of Raggedy Ann is renewed each time they find a new piece for their collection.

Since the museum opened in 2012, Nancy Jo Fox has been in charge of decorating the front window. She had fun designing and setting up a Happy Birthday scene to correspond with the special Raggedy Ann and Andy exhibit.

In addition to doll collecting, Rowan Doll Society club member Cathy Wood enjoys drawing and painting. Two of her original drawings depicting a modern take on Raggedy Ann and Andy are featured in the museum’s front window display. Wood, who drew the loveable pair of rag dolls, had the Spencer Doll and Toy Museum in mind when she created them. Wood had the drawings reprinted on postcards which will be sold in the museum’s gift shop.

Donnie Whitesides, who has been a club member for many years, is particularly fond of Raggedy Ann. The items she brought to exhibit, in addition to several dolls, include a lunch box and thermos, a jacket she hand-painted depicting various images of Raggedy Ann and a ceramic head vase (an item originally produced by florist companies to hold the bouquets they sold)

This display holds intrinsic and historical value and will be treasured for a lifetime by those who are fortunate to see it.

The Spencer Doll and Toy Museum is open Thursday, Friday and Saturday from 10 a.m. – 4 p.m. For more information  call 704-762-9359 or visit SpencerDollAndToyMuseum.com

Lynna Clark: A little messed up, or Autocorrect can be your worst enema

Do you ever get a song stuck in your head? Currently I have a Kenny Chesney tune repeating over and... read more