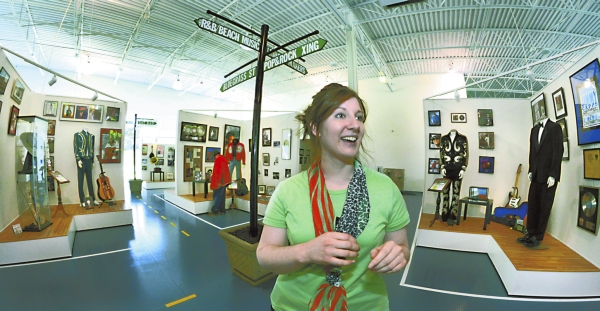 KANNAPOLIS — Stepping into the N.C. Music Hall of Fame is like stepping back in time, hearing music from Tar Heel musicians of the 1920s and ’30s, seeing all kinds of memorabilia, and discovering contributions of nearly 100 music industry professionals all the way to the present day.

Seven classes of Hall of Famers have been inducted at the museum, with the 2015 class set for admittance on Oct. 15, at a Gem Theatre gala. The class of 2015 includes: Henderson native Gerald Alston, lead singer of the Manhattans; Granite Falls native Eric Church, a country/rock musician and singer; Asheville native Warren Haynes, a Southern rock guitarist and singer; Winston-Salem native Chuck Jackson, an R&B/pop singer; the Fantastic Shakers, a Carolina beach music band formed in Lincolnton; the late Rev. F.C. Barnes, the late Nappy Brown and the late Jay Spell.

Since the museum moved to its new digs at 600 Dale Earnhardt Blvd. — an expansive space it shares with the Curb Motorsports Museum — it has six times the space of its previous location in Cannon Village, according to Veronica Cordle, the museum’s executive assistant and only full-time employee.

“The gala is our biggest event of the year, and it’s so much fun,”  Cordle says. “The whole meaning of the museum is to honor these artists.”

So whether you’re a music fan or a race fan, there’s something for everyone to see here, says Cordle, a China Grove native and the great-great niece of bluegrass musician Curly Seckler, himself a Hall of Fame inductee.

If you’re wondering about the racing-music connection, it’s simple to explain, Cordle says. NASCAR team owner Mike Curb is also the founder of Curb Records, so that’s why the two museums are here, she says.

The N.C. Music Hall of Fame honors anyone in the music industry who was born in North Carolina, or who has spent a significant amount of time here. They must also have spent at least 10 years as a prominent industry member, Cordle says.

The museum is meant to appeal to a wide audience, and does just that.

For example, some 2,000 students will visit the museum this year, as fourth- and fifth-graders study North Carolina history.

“We’ve had a huge increase in visitors since we’ve been in our new location,” Cordle notes. “When you get 200 fourth-graders running around, it’s really fun.”

Each year, the museum inducts seven to 10 individual musicians or bands, Cordle says. “We ask for anything they can give us.”

“It all helps tell the story of our musicians’ careers,” she says.

The museum got its start in Thomasville, and has been located in Kannapolis for the past seven years.

Eddie Ray, a longtime music industry executive, is a big part of the museum, because he gave Curb his start in the business, Cordle says. “They’ve been friends ever since and have done a lot of projects together over the years. This is one of them.”

You can stroll down Beach Music Boulevard, Bluegrass Street, Jazz Alley and Country Road on a guided or self-guided tour. You’ll see lots of familiar names along the way.

There’s Clay Aiken from Raleigh and Fantasia Barrino of High Point, both of “American Idol” fame. Curly Seckler of China Grove played for years with the Foggy Mountain Boys. You can see a poster from a 1935 concert at Bostian School, by Seckler’s group, the Yodeling Rangers.

Jazz great John Coltrane hailed from Hamlet, with Thelonious Monk from Rocky Mount. Opera singer Victoria Livengood is from Thomasville. Rick Dees grew up in Greensboro and graduated from the University of North Carolina. He rose to fame in the 1970s with the hit novelty song, “Disco Duck.” He now hosts the Rick Dees Weekly Top 40 syndicated radio show.

James Taylor was raised in Carrboro, and contributed concert T-shirts, posters and album covers. Tori Amos, whose family was from Maryland, just happened to be born in Newton, but still claims the Tar Heel state as her own, Cordle says.

Kate Smith lived in Raleigh for years, and will always be remembered for her stirring rendition of “God Bless America.”

Les Brown went to Duke University, and joined the Blue Devils Band, which later became the Band of Renown during the Big Band era. Maurice Williams of the Zodiacs, whose big hit was “Stay,” now lives in Charlotte.

The only Cabarrus inductee is Kannapolis native George Clinton, the longtime leader of Parliament Funkadelic.

The museum is in the process of developing smartphone tours for each exhibit, and continues to add to its offerings, Cordle says. “It’s a pretty big collection — and it’s growing.”

The N.C. Music Hall of Fame is open 9 a.m.-4 p.m. Monday-Friday, and admission is free. To schedule a group tour, call Victoria Cordle at 704-934-2320. General admission tickets to the Oct. 15 gala are $25. For more information, visit www.northcarolinamusichalloffame.org.