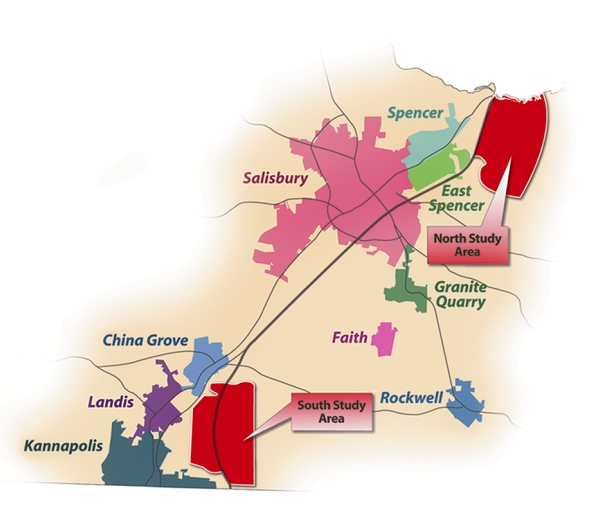 A recent study focused on extending water and sewer to the red areas on this Rowan map. Graphic by Andy Mooney, Salisbury Post

It’s been more than a year, but Rowan County’s water and sewer feasibility study is finally complete.

Costs are further divided into the north and south study areas. The feasibility study further breaks costs down into the price to line individual roads with water and sewer service. All maps included in the study show new water and sewer lines extending from the Salisbury-Rowan Utilities System instead of an independent county system.

During their Monday meeting, Rowan County Commissioners are scheduled to receive a presentation from Hickory-based McGill Associates, who prepared the study. The meeting will be at 6 p.m. in the county’s administration building at 130 West Innes Street. Commissioners could also make a decision about how to proceed with the data and maps contained in the 47-page document.

Commissioners have said a water and sewer system resulting from the feasibility study isn’t intended to primarily provide residential service. When asked about the feasibility study this week, Commissioner Craig Pierce said new, county-funded water and sewer lines would likely first be installed in the north study area for a tract of land on Long Ferry Road. The land is referred to by county officials as “the Carlton property.” It’s situated across from Dukeville Road and near Buck Steam Station.

Commissioners have talked about the Carlton property as a site for future economic development.

Water lines in the north area also extend to houses with well water declared unsafe to drink as a result of state testing for coal ash contaminants.

Sewer in the north area only appears to extend to the Carolton property and another proposed site for economic development. The study’s proposed sewer lines don’t extend to any residential properties.

Water lines in the south study area, which is more heavily populated than the north area, snake through residential neighborhoods and also extend to a proposed economic development site. Sewer lines are more expansive in the south study area, but also do not extend to all residential properties. The study proposes the south area’s sewer system connect to either Salisbury-Rowan Utilities’ system or Kannapolis’ system.

Instead of taking on the entire $60 million water and sewer project at once, county officials say they plan to split the project up into specific phases. The first phase, Pierce said, would likely focus on the Carlton property and cost approximately $10 million. At the earliest, construction could begin within six months, Pierce said.

Pierce, who initially proposed a water and sewer system in 2014, said the county would likely have to pay for the project through bonds. He mentioned the Nov. 2016 general election as a potential date for a bond referendum vote.

Pierce said developments in parts of the county have been delayed or stopped entirely because of a lack of water and sewer lines.

City, county to Little Leaguers: ‘Thank you from the bottom of our hearts’

Mark Wineka mark.wineka@salisburypost.com SALISBURY — They hit. They pitched. They defended. They showed grace, sportsmanship and generosity. They put us... read more