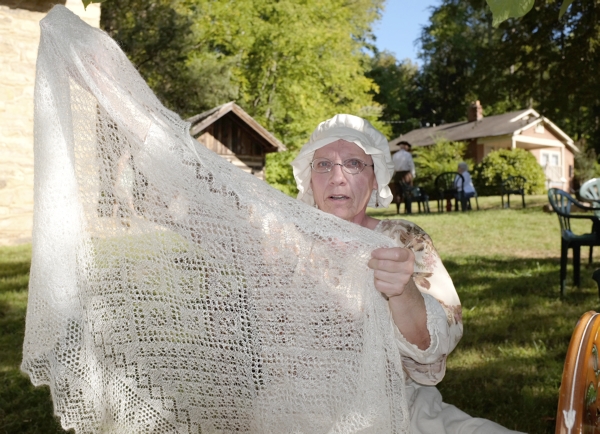 Celebrating the simple life at Germanfest

Looking back today at the lives of German immigrant Michael Braun and his family, who built the Old Stone House outside Granite Quarry in 1766, it’s a term that seems fitting.

It didn’t feel much like autumn Saturday evening, as the bright sun beat down on the Old Stone House lawn for Rowan Museum’s annual Germanfest.

But still, guests said that just being there on the lawn was like taking a trip back to those simpler times, when people worked hard but still had time for family and simple pleasures.

In addition to a full meal of barbecued chicken, pulled pork, German potato salad and homemade apple pie, there were cooking demonstrations over an open fire, basket-weaving and tours of the stone house that was built before the Revolutionary War and painstakingly restored in the 1960s.

“I think there’s a certain fascination people have with other eras, including the Colonial era,” said Stephanie Muff, who gave yarn-making demonstrations with a wooden spinning wheel.

Using both the spinning wheel and a hand-spindle, Muff can make various kinds of yarn in different thicknesses and colors, for various purposes.

At Germanfest, kids and adults alike got to try their hand at making simple yarn.

Besides being entertaining, Muff said, “you hope that maybe, out of a hundred people, one or two will get an interest and learn how to do this.”

How they lived then

Besides the meal of Schweinefleisch (pork barbecue) and Apfelkuchen (apple pie), with cold German beer and wine to wash it down, Rowan Museum Executive Director Kaye Brown Hirst said that Germanfest is a chance to see how the early immigrant families who came to Rowan County actually lived.

At this time of year, she said, families like the Brauns would have been working quickly to get ready for cold weather.

“Yes, it was a simpler way of life, but it was a hard life,” Hirst said.

By September, Hirst said, “the days were starting to get shorter, so they didn’t have as much sunlight. They’d be working more fast and furiously to get things ready, to put up as much as they can.”

Apples, cabbages and other root vegetables would be staples of the autumn and winter months, stored up in the cellar.

“They’d be stringing beans and peppers, hanging them in the kitchen to keep them away from mice,” Hirst said. “They would be drying their corn, and maybe going to a corn shuckin’ as well.”

Meanwhile, the ladies of the household would be getting quilts and winter clothing ready, mending hand-me-downs and making new as needed to make sure everyone could stay warm.

Hirst said that one of the joys of the Old Stone House is that it gives people a chance to see history come to life.

Earlier in the day, she said, about 70 people came to the Old Stone House for the 101st annual Brown-Fisher reunion.

Looking to the future

“This is my favorite place in the county,” said Susan Waller, who volunteers at the museum. “I come here and think I was born 200 years too late.”

Waller gives cooking demonstrations at Old Stone House events several times per year. “You love it when people come here and hang out. They’re not in a hurry,” she said.

As guests relaxed to live music after supper, Stephen Brown, president of the Brown-Fisher Association, talked about the future of the site.

In addition to building a replica baking oven outside the kitchen, recreating one seen in old photos, Brown said there are other improvements planned for the Old Stone House.

Jason Brown, a local resident who said he’s descended from Michael Braun, said the Old Stone House is “a gem for the county, the fact that it’s been here and preserved.”

“There are so few pre-Revolutionary War buildings in the whole state, so the fact that it’s here is really great,” Jason Brown said.

Jeff Mabrito, who recently moved to China Grove, brought his wife and children out to Germanfest.

“I didn’t even realize there was this much heritage here,” Mabrito said as his daughter played nearby. “It’s a beautiful house, and it’s fascinating to see all the people descended from them, keeping in touch with their ancestry.”

Dear electric car owners in the Piedmont, you’ve now got a place to charge up in Salisbury. A group of... read more