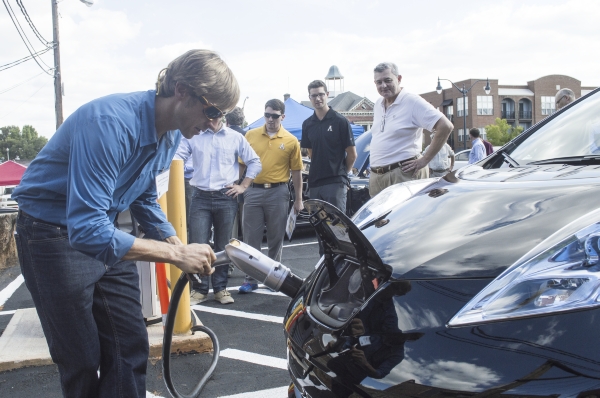 Dear electric car owners in the Piedmont, you’ve now got a place to charge up in Salisbury.

A group of city leaders and business representatives this week unveiled a car charging station in a parking lot on the 100 block of South Lee Street, behind Nashville Nights. The charging station is joint venture between several different entities, including Nissan, the Wallace family and Brightfield Transportation. It can charge most cars to 100 percent battery within 30 minutes, according to Brightfield co-founder Matt Johnson. Larger cars could take two hours, Johnson said.

The charging station is one of about 30 total locations across the state, according to a map prepared by the Centralina Clean Fuels Coalition. It will be the only charging station in Rowan County. The several stations owned and operated by Brightfield, which includes the Salisbury spot, have doled out enough electricity to represent 35,000 vehicle miles to date. Salisbury’s however is the first to be officially unveiled. Johnson said the usage means car owners have already begun to find spots where he or she might be able to fill up.

Electric car owners can also recharge cars at his or her house. Johnson said the stations would be beneficial for visitors who may in town for a weekend event.

Johnson said the first step is to let people know the benefits of driving with electric vehicles.

“Everyone knows electric cars aren’t running on gas, but there are so many more benefits,” Rowan County native Lane Wallace, whose provided land for the charging station.

She listed a decline air pollution as one example.

Richard, David and Harold Lampie — a family trio who built two electric cars — attended the event and more frequently talked about the economic value of the vehicles. The electric vehicles built by the Lampie family included a 1996 Ford Aspire and 1986 Ford Festiva. They got pretty decent gas mileage before being converted to electric vehicles, Richard said.

When gas inched close to $5 per gallon, the Lampie family decided to convert.

With about $22,000 spent on each car, gas isn’t even an option anymore on the vehicles. Both of the Lampie vehicles are both loaded with several hundred pounds of batteries.  Richard estimated driving the vehicle now only costs a couple cents per mile.

A desire to be environmentally friendly, however, is another strong motivation for many electric car owners, Richard said.

Both of the Lampie vehicles could be charged with the station installed off of South Lee Street. In fact, Johnson said the charging station would be able to charge nearly all electric vehicles currently sold publicly.

During this week’s unveiling, Salisbury Mayor Paul Woodson called the charging station another positive, progressive step for the city, citing a recent announcement that Fibrant had significantly upgraded its speeds.