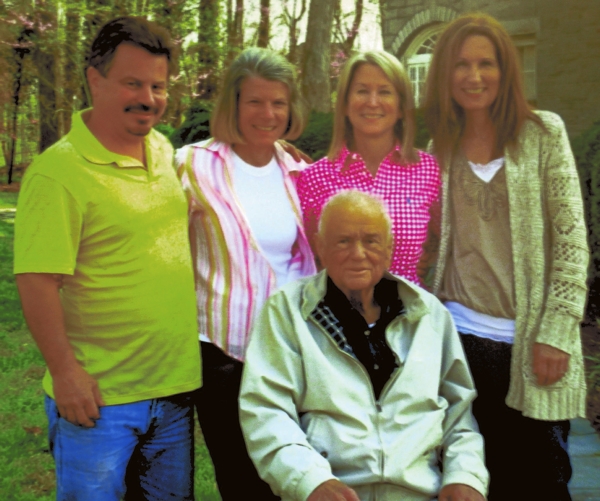 The complex, kind-hearted man who was Jake Fisher

It seemed as though he could do anything. He was a businessman, farmer, mechanic, cook and public official. Fisher also was a hands-on, never-satisfied, 210-pound bull in a china closet who lived by a philosophy that more was better.

If 15 family members stopped by his house on North Salisbury Avenue, the only thing better to him would be if there had been 50.

The usually gruff Fisher demanded a lot of his employees and family, yet daughter Marsha Tucker says he had “the biggest heart in the world.”

His sensitive side came out, no matter how much he tried to hide it. Fisher never warmed to sending his cattle to slaughter, and at family gatherings, he often stood up to welcome everyone, but it took only two or three sentences before he was choking up with emotion.

“He was a complex man,” daughter Connie Lindsay says.

At the end of 2014, Jake Fisher was diagnosed with stage 4 pancreatic cancer, and he died last Tuesday in the same room he was born in.

Not everyone knew it, but for more than a year, Fisher also was blind.

His wife, Phyllis, truly was the shoulder he leaned on during his blindness. They seemed attached to each other at times. This week, they would have celebrated 58 years of marriage.

Jake Fisher couldn’t sing worth a darn, but that didn’t stop Phyllis and him from calling family members on their birthdays and singing their greetings, with Jake loud and terribly out of tune. Daughter Kim Shuping still has his last “Happy Birthday” song stored in her cellphone.

Fisher built an enviable career in business. Some people might not remember this, but for 10 years he owned and operated Jake’s Gulf Service in Granite Quarry. Then came 30-plus years in mobile homes and manufactured housing.

He was president of Carolina Mobile Homes before starting Homes by Fisher Inc. in 1969, and later, Fisher Corp. in Richfield. Oakwood Mobile Homes bought his first company; Clayton Homes, the second.

When he was making manufactured homes, Fisher never left one leave the plant without his personal inspection. His advertising slogan was “It’s Not a Fisher, ‘Til I Say It’s a Fisher.”

Still restless after the sale of Fisher Corp., Fisher and his son, Eli, founded a third company, Fisher Products.

As boss, Jake Fisher expected a fair day’s work. Fisher bought an old school bus so he could pick up and take home his employees during bad weather days. Once, when Eli broke his leg, Fisher cajoled his son into going to the plant with him the next morning. On their arrival, a golf cart was waiting for Eli to use in making his way around the factory.

Though his father could be hard to deal with at times, Eli always told skeptical fellow employees, “You will learn to love him in the end.”

If you were upset with him, you had 15 minutes to get over it. “That was a golden rule you had to live by,” Eli says.

For sure, there was a tough love behind the man. Once when he and an employee had a disagreement, Fisher drove home and returned with his boat in tow. He and the disgruntled employee spent the rest of the day fishing at the lake.

The man stayed with Fisher until retirement.

Eli Fisher says his father sat him down once and made sure Eli knew he considered everyone who worked at the plant on equal footing. He never wanted to hear Eli say the employees worked for them.

“We all work together,” Jake told him.

If an employee was trying to leave for a better job, Fisher would be the first person to call the potential new employer with a good recommendation.

Once a worker wanted to start his own grading business, and Fisher bought him a bulldozer. Since Fisher’s death, family members have been hearing many reports of kind things Fisher did behind the scenes for people.

“He didn’t do it just to do it,” Eli Fisher says of his father’s acts of kindness. “They had to have a reason.”

Fisher served several terms on the Granite Quarry Board of Aldermen in both the 1970s and in the 2000s. But it’s likely more people knew him from all the oyster roasts, fish fries and barbecues he led to raise funds for Scouts, churches, Shriners, schools and the town, or just to feed his employees and senior citizens.

For a time, Fisher regularly had a fish fry for seniors at the family’s lake house. All the senors had to do was bring a lawn chair and an appetite.

In retirement, he also enjoyed baking bread for seniors in Granite Quarry and Salisbury and making a mess of Phyllis’ kitchen in the process. Because more is better, his mixer seemed to weigh about 600 pounds, Phyllis says. In the last two weeks of his life, Fisher kept saying he wanted to make one last batch of bread.

Jake Fisher planted a garden every year so he could give most of the vegetables away.

When a drought hit Western farmers hard one year, Fisher shipped hay to them from his own farms in his own trailers.

He was the ramrod behind construction of the dining hall at Camp Barnhardt. He also played significant roles in the first building at the N.C. Zoo and the Holly Hut at Dan Nicholas Park.

The Shrine Club building was twice as big because Fisher was a member.

When he was still running a mobile home plant, the Boy Scouts’ Central North Carolina Council came to Fisher in 1974 for a donation. He offered to do an oyster roast fundraiser instead, and it spread to all seven counties.

At each event, Fisher was chief cook and chief executive officer. He was constantly checking on the right depth of the boil and testing the flavor of hushpuppies. Family members were expected to pitch in.

“If you grew up in this family, you knew how to work,” Marsha Tucker says.

Connie Lindsay laughs, saying her father liked the family to share in his misery.

His wife and children never knew if Fisher would show up for a family function, because he always seemed delayed on the farm. And if he asked you to help him on something for 10 minutes, you counted on its taking three hours.

Only Fisher knew how many cows he had or how many places he was farming, son-in-law Clay Lindsday says. Gerrie Combs helped in keeping all of his books and records straight and became a cherished family friend.

Combs started working with Fisher in 1978 and pretty much never stopped.

Fisher could be absentminded.

“It was hard for him to keep up with small things,” son-in-law Donald Tucker says.

Fisher was constantly dropping and losing his phones in the fields. Likewise, he continually locked himself out of the house. He stubbornly refused to hide a key. Instead, he kept a stack of window panes at the ready because every other week he would have to break glass to get in.

The stubbornness showed itself, too, as his eyesight worsened. When he couldn’t see to drive a car, he still thought he could drive his farm tractor.

But Tucker says Fisher was a hopeful person. When anyone in the family received bad news, Fisher was ready for the next step. “What’s our plan?” he would ask Tucker. Even on the Sunday before his death, Fisher was asking the Hospice nurse, “What can we do to reverse this?”

Simple pleasures sustained Fisher in his last months. He enjoyed chocolate milkshakes and Cheerwine in bottles — it had to be in bottles. News of his grandchildren also kept him going. He did his best to keep up with the activities of all nine.

At this year’s first snowfall after his father’s diagnosis of cancer, Eli Fisher sculpted a sizable snow angel in his parents’ front lawn. Motorists in hundreds of cars seemed to stop, take pictures of the angel and draw inspiration from it, many of them knowing the fix their friend Jake Fisher was in.

Fisher, who shunned attention like the plague, liked hearing about the angel and the interest it was attracting. The family could tell.

A memorial service will be held for Jake Fisher at 11 a.m. Sept. 26 at Wittenberg Lutheran Church. Contact Mark Wineka at 704-797-4263, or mark.wineka@salisburypost.com.