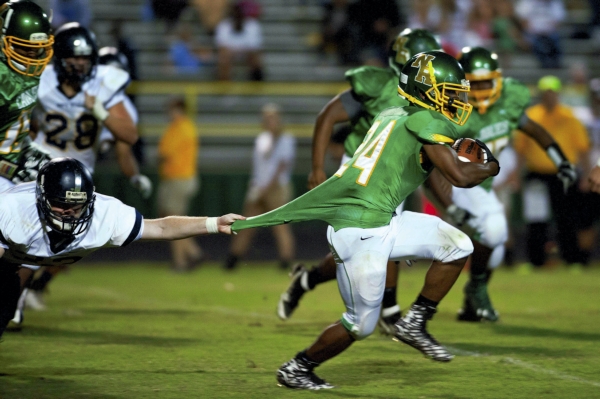 SPENCER — Make a list of all of the horrible things that can go wrong in a football game and you get an idea what it was like Friday night at North Rowan’s Eagle stadium.

The South Iredell Vikings came to town and proceeded to block three Cavalier punts, notch a pair of safeties and make a couple of back-breaking plays at the beginning of each half. The result was a lopsided 40-14 win for the Vikings (3-1) as they handed the Cavaliers (1-4) their third-straight loss.

The non-conference game started badly for North when Viking runner Tyree Hallman broke off a 78-yard touchdown sprint on the very first play from scrimmage. Then, things only went downhill from there. North was forced to punt on its first possession and South Iredell’s Cody Gilliland broke through to block the kick at the Cav 29. Sharod Phelps scooped it up at the 25 and ran in for the score to make it 14-0 less than two minutes into the game.

A couple of series later, another Jacob Young punt from midfield was blocked out of bounds by Viking Quinton Reed at the Cavalier 24. Three plays later, Hallman scored from the two on a direct snap then a two-point conversion run by Lundon White made it 22-0 in the first quarter.

The third blocked kick came early in the second period with North on their own 42 when Gilliland struck again with his second of the game. It took four plays for the Vikings to score from there highlighted by a 35-yard end around on fourth down by Dydrion Leach. The 29-point margin held up until halftime and had the Cavaliers back on their heels.

“They were just coming up the middle and kind of overpowering our front line,” said Young a 6-1 sophomore who handles all of the kicking duties for North. “We finally got it together later in the game but it put us so far down we couldn’t dig out of it.”

Young did have a pair of solid punts of 38 and 43 yards, plus kicked two extra points after second-half North touchdowns, but the blocked kicks had already done the damage.

“We are always aggressive on special teams,” South Iredell coach Scott Miller said. “We had already blocked two or three this year before tonight because our kids work real hard at it and understand that anytime you can change the momentum of the game, it is a good thing.”

The second half started just as badly for North when Desmond Gray coughed up the second half kickoff on a hard hit, giving South Iredell the ball at the five. Three plays later, Hallman pushed in for his third score of the night from the three-yard line making the score 36-0.

The North paid the price for a couple of bad snaps to put them further in the hole. A high snap sailed over Young’s head on a punt attempt and bounced into the end zone. He was forced to kick it out of the back of the end zone for a safety and a 38-0 lead for the Vikings.  It happened again a couple of minutes later when a shotgun snap to quarterback Josh Ellis got past him and rolled into the end zone. Ellis fell on it and was downed for another safety at 4:04 of the third period.

Down 40-0, the Cavaliers suddenly found some offensive spark behind running back Xavier Haley and quarterback Corbin Smith. As the third period wound down, Haley broke a 43-yard run then Smith hit receiver Alonzo Sirleaf in the back of the end zone to make it 40-7. Midway in the final period, North was turned back at the Viking six on downs but were able to force a punt.

The Cavaliers moved quickly from there as Smith hit Trey Stimer for 23 yards to the 20 and Haley then scrambled into the end zone to make it 40-14. Haley ended up with 147 yards rushing all in the second half.

North coach Ben Hampton said he didn’t want to sound like a broken record but his team needed to do a better job of protecting the ball and avoiding costly penalties. “We have just got to get better and execute better,” Hampton said. “We will continue to emphasize ball security and obviously we have a lot of work to do with our special teams.”

Ironically, despite all of their punting and snapping woes, the Cavaliers actually outgained the Vikings for the game on the ground and through the air, 265 total yards to 178. They also ended the game with a blocked punt of their own by Zion Dubose.

North will try to rebound next week with a road trip to King to face West Stokes. It will be the final tune-up before they begin Central Carolina Conference play.