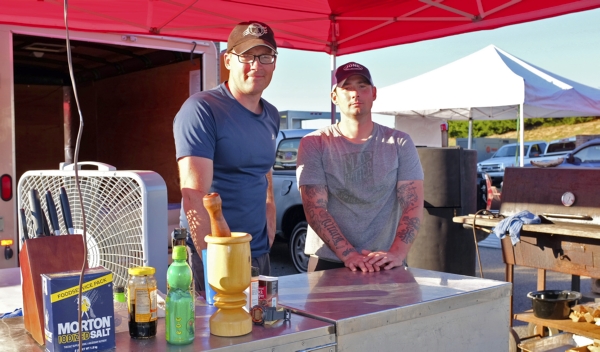 So Caught Up in ‘Cue:  Biker Blues & BBQ continues today at Tilley Harley-Davidson

SALISBURY — The Biker Blues & BBQ Rally roars to life this morning with a 9 a.m. charity poker run, followed by a full morning of barbecue and live music.

The event continues from 9 a.m. to 6 p.m. today at Tilley Harley-Davidson, with live entertainment, a vendor fair and the People’s Choice barbecue competition, followed by the awards ceremony at 4 p.m.

Tom McGrath’s Poker Run for Charity is set for 9 a.m. at Tilley Harley-Davidson.

The barbecue competition once more has drawn teams from all over the Southeast, organizer Gary Moss said.

“We’ve got 63 teams competing, some of them new teams,” Moss said. “We’ve got people here from Virginia, Florida, Georgia, Tennessee and other states.”

The competition is sanctioned by the Kansas City Barbeque Society and features cash prizes.

Last night saw the barbecue teams getting down to business in the parking lot and field behind the Harley-Davidson dealership. By sunset, thin wisps of smoke were rising and teams were getting their cookers ready for a long night of barbecuing.

One of the teams making a first appearance at a KCBS competition is composed of two men who started out as rivals.

“We actually wound up competing against each other at a brigade-level barbecue competition,” Cornish said.

The two men became friends, and decided to combine their efforts for a barbecue competition in the civilian world.

“(Cornish) is the brainchild behind us coming here,” Brattin said.

Cornish, meanwhile, said Brattin’s barbecue ribs are “hands-down, the best I’ve ever had.”

“We’ve done a lot of research. We’ve got homemade sauce,” Cornish said. “We’re mad scientists when it comes to cooking.”

As for the purpose of the event — raising money to help veterans — both men said it’s incredible knowing that people are coming together to help servicemembers.

“Also, any winnings we get will go to help a charity back home in Fayetteville,” Cornish said.

Across the field from Rock ‘Em SOCM’s mobile kitchen, back-to-back People’s Choice champions Marsha and Roger Wise were getting meat ready to go on the smoker for their team, Pickin’ Porkers BBQ.

“We’re going to try to do what we always do,” Roger said, “put on the best barbecue we can.”

The Wises said their winning secret is having a slightly smokier barbecue than the competition.

Getting the smoke just right involves applewood and hickory, but beyond that, Marsha said, it’s a trade secret. “Like they say, I could tell you, but I’d have to kill you!” she said, laughing.

The Wises said the annual competition is a lot of fun to attend, and well-organized.

The People’s Choice barbecue competition runs from 12:30 to 2:30 p.m.  For a $10 donation, guests can sample 10 teams’ barbecue and vote for their favorite.

A full schedule of events and more information is available at www.bikerbluesbbqrally.com.

The complex, kind-hearted man who was Jake Fisher

GRANITE QUARRY —  Men like Jake Fisher don’t come along too often. It seemed as though he could do anything.... read more