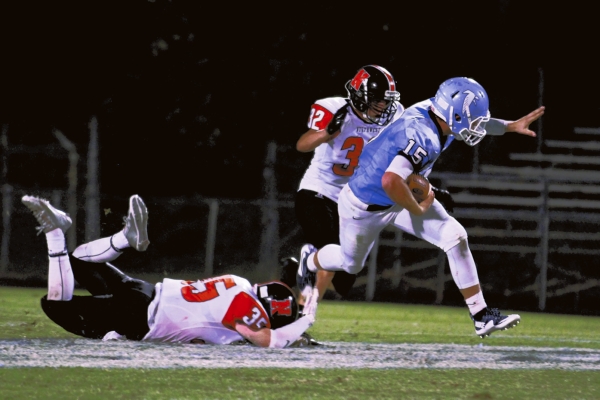 MOUNT ULLA — West Rowan hadn’t posted a shutout since it blanked Northwest Cabarrus, 13-0, on Sept, 19, 2014, so Falcon defenders were hungry.
“We wanted a shutout bad,” 6-foot-3, 250-pound lineman Dearius Phillips said.
“We came to fight and we came to eat,” added 260-pound defensive lineman Devin Turner.
West Rowan nearly got that coveted goose egg, but Northwest Cabarrus linebacker Cameron Threadgill wasn’t quitting. He’s also his team’s backup fullback and he broke a triple-option dive play for a 45-yard touchdown with 7:42 remaining to spoil some of the Falcons’ fun.
West Rowan (3-1, 2-0) settled for a 34-6 South Piedmont Conference victory that wasn’t in doubt after the opening quarter.
“We’ll take it,” West Rowan coach Joe Nixon said. “Our kids played hard and I’m happy with them. We turned it over a few times in the red zone, but we got better and we did some good things.”
West Rowan’s defense was suffocating in the first half and limited Northwest Cabarrus (1-3, 1-2 SPC) to a single first down. On one play, Turner, Phillips and 6-4, 290-pound Derrick Moreland all pin-balled NorthestWC QB Damian Bertino. That was 800 pounds of muscle and beef crashing into Bertino for a loss of 12 yards.
“There wasn’t a lot we could do offensively against them,” Northwest coach Rich Williams said. “They were bigger than us and they were also faster than us. We couldn’t move them up front and we could’t get outside on them either.”
Turner, who is only a sophomore, was the most destructive guy in West’s onslaught.
“I had a roughing the passer penalty that hurt us, but I was able to keep calm, move on and make some plays,” Turner said.
Northwest finished with 144 yards of offense, but 97 came on two plays. Besides Threadgill’s breakaway there was a 53-yard sprint by fullback Omar Kiser on a dive play early in the second half.
Kiser’s sudden dash helped the Trojans penetrate inside the West 10, but a block-in-the-back penalty and a sack by Phillips denied the Trojans.
“We had a few chances,” Williams said. “We just couldn’t finish things off against a very physical team. Their physicalness is going to make them one of the best teams in our league.”
Offensively, the Falcons went back to the drawing board after a sputtering effort against Robinson in which the defense bailed them out. West opened the game with sophomore Bryant Young at quarterback and usual QB Kacey Otto at fullback. Some good things happened.
“We moved some guys around,” Otto said. “We were just trying to find a spark on offense, and I believe we did. Our offensive line had the best push that it’s had all season, even though Northwest’s defense is pretty good. We’ve got stout playmakers. We did a better job tonight of getting the ball into their hands.”
West hit a number of big plays — an early 37-yard pass from Young to Kortez Weeks that keyed West’s first scoring drive; a 44-yard pass from Otto to Houston that set up the Falcons’ second TD; and a 34-yard TD pass from Otto to Houston for a 20-0 halftime lead.
It might’ve been 34-0 at the break, but the Falcons had turnovers that stopped two drives.
“But we hit those big plays” Nixon said. “That got us going.”
Jovon Quarles broke a 63-yard run down the right sideline that set up a second-half touchdown.
West Rowan rushed for a season-high 275 yards, with Quarles getting 134 and Otto picking up 92 as a combination fullback/scrambling quarterback. Martavio Rankin pounded out 46 yards. Quarles had two rushing TDs, while Rankin had one.
“We stood in there defensively and they had quite a few negative plays,” Williams said. “They didn’t sustain a lot of long drives, but they killed us with big plays.”
West beat Northwest for the 12th straight time, but there was some disappointment when the shutout slipped away.
“The dive is the first thing you stop with the option, so when they broke that dive play for a touchdown, it was the worst feeling in the world,” Turner said. “I felt like crying.”
West takes on South Rowan next week in its first county matchup of the season.
“We’ll get better,” Phillips warned. “Our defense is just starting up.”
***
NOTES: Bertino was taken from the field by ambulance after he experienced neck pains shortly before halftime. Williams said reports on him were positive and he’s expected to be fine.