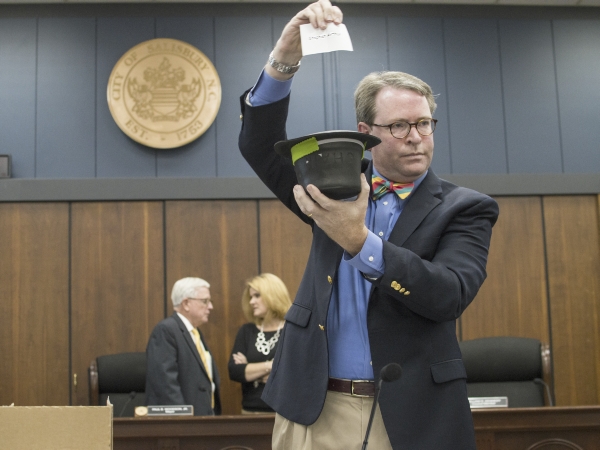 Josh Bergeron / Salisbury Post - Catawba Politics Professor and Provost Michael Bitzer draws city council candidate names out of a hat prior to a council meeting on Tuesday. The drawing decided candidate groups during an upcoming forum.

During an Oct. 15 City Council candidate forum, participants will be split into two distinct groups.

A larger portion of candidates during the 6 p.m. forum don’t have any experience on City Council. The second, 7:30 p.m. forum includes two of the three incumbents running for re-election and three with council experience. Catawba College’s Hedrick Little Theater will host the candidate forum.

Catawba Politics Professor and Provost Michael Bitzer, who will moderate the candidate forum, picked names out of a hat prior to Tuesday’s City Council meeting to decide the order.

Called the Gerardo Hernandez Airport Security Act, the bill was first introduced during Hudson’s first term. It also passed the U.S. House in his first term.

Among other things, the bill would direct the U.S. Department of Homeland Security to give technical assistance to verify airports have plans for responding to security incidents in the facility’s perimeter, including acts of terrorism and active shooters.

“As threats to our security continue to grow and evolve, we must ensure our transportation community is prepared to protect themselves and the traveling public,” Hudson said in a news release about the bill. “This bill will create safer airports and transportation hubs across the country by providing more extensive coordination between all transportation security stakeholders. Given the partisan gridlock in Washington, I am proud of the support from folks on both sides of the aisle, and I encourage the president to join us in our efforts to keep travelers safe.”

When budget votes first occurred in the N.C. General Assembly, Rep. Carl Ford, R-76, was the only legislator representing Rowan who opposed his house’s budget.

At the time, Ford mentioned increases in motor vehicle fees as one reason for his opposition.

Approval of the budget came on day 128 of the current legislative session. It was nearly three months after an original due date.

Gov. Pat McCrory signed the budget into law on Friday.

One person was shot in the groin Thursday evening during an incident near Salisbury High School, according to Salisbury Police.... read more