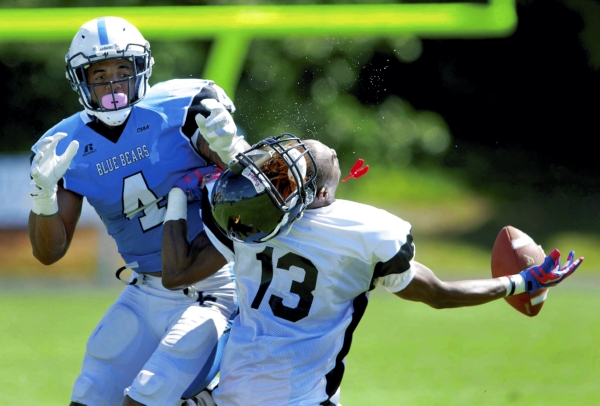 Let the record show that the Blue Bears improved to 3-0 on the field with Saturday’s 40-0 trouncing of newborn Central International University — even though their last two victories and all those mind-boggling statistics won’t count according to NCAA guidelines.

“That’s just tough,” quarterback Drew Powell said at sun-splashed Alumni Stadium. “It just makes you want to play as a team. You play to win, not for the stats or individual accolades.”

There were plenty of those to go around against CIU, which launched its football program with mostly freshmen and sophomores and was thoroughly outplayed. Winning coach Daryl Williams saw the good, the bad and the ugly of it all, but emerged wearing a broad smile.

“The biggest thing is we’re right where we want to be,” said Williams, now in his third season at Livingstone. “I tell people all the time that major programs aren’t built by playing top 10 teams every week. When you’re trying to build a successful program, scheduling is very important. This was another step for us.”

CIU coach Travirus Davis said he expected a closer match. “We were undersized and under-manned,” he noted after the Cardinals were penalized 197 yards in their debut. “They overpowered us, mostly because they were more disciplined that we were. I know you’ve got to start somewhere, but I didn’t want to start like this.”

Instead, Powell led the Blue Bears to three first-quarter touchdowns, spiraling scoring passes to all-conference receiver Jalen Hendricks and running back Marcus Baisey Jr. Sandwiched between them was Hendricks’ 45-yard TD pass to William Tatum on a double-pass play.

“Jalen played quarterback in high school and he’s thrown some passes in practice,” Williams said. “We just wanted to have a little fun. I don’t want to be a coach who’s just grinding and grinding all the time. These guys deserve to have some fun and it was a quick way to score.”

By halftime, Powell and Hendricks were relieved of duty and Livingstone had a 33-0 lead, thanks to Leonardo Manzo’s 29-yard field goal, a gold-rush safety by defensive lineman Gerard Lyons and an 85-yard touchdown pass from backup Zay Laster to sophomore Brandon Bennett. “This is a game we were supposed to win,” Powell said after passing for 94 yards in a little more than one quarter of action. “We executed a lot of plays just like we drew them up.”

“We got the win,” he said. “But we missed tackles and missed plays and gave up too many yards. At the beginning of the game, I told my team there’s no way these guys should even get a first down against us. Some of the things we did today — when we get to the conference games — those teams are going to punch back.”

NOTES: Livingstone opens its CIAA season next Saturday at Bowie State, which recruited Powell out of high school in Maryland four years ago … The Blue Bears racked up 427 yards total offense and never punted. Their only attempt resulted in a fake and a 33-yard pickup by senior lineman Ekanem Ekanem in the fourth quarter. … LC’s defense allowed only eight first downs and scored a third-period touchdown when Anthony Grady fell on a CIU fumble in the end zone.