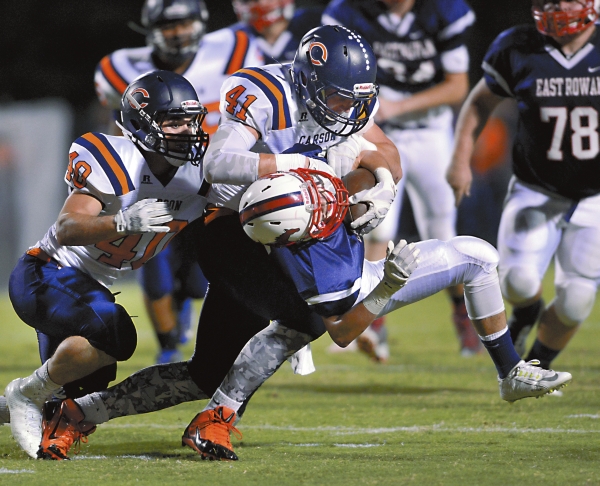 Carson gets defensive at East Rowan

GRANITE QUARRY— Defense was back in style Friday night at East Rowan — and the team with better numbers didn’t prevail.

It was visiting Carson, a team held to fewer than 200 yards total offense, that celebrated a 14-6 South Piedmont Conference victory.

“When these two teams get together, it’s a lot of excitement,” winning coach Joe Pinyan said after the Cougars (3-1, 1-1) ornamented their just-under-the-radar start. “This was big for us because we had enough of that losing last week. I think we’re ready to turn the corner.”

It was Carson’s defense that led the march. On a night when its offense produced only five first downs, Carson prevailed largely because it’s defense locked in when it mattered most.

Bearden, Garrett Pell and Andrew Jerman had interceptions for Carson — and they were far from ordinary. Each was deflected or tipped by offensive players and squashed rallies deep into Cougars’ territory, ending drives from that reached the 17, 28 and 16 yard lines.

“They’re playing with their heads up, their hands up,” Pinyan said, after East collected 245 total yards. “That’s just good defense. They’re flying all over the place. It’s just good.”

East’s defense was even better. It yielded only a pair of short-field scoring drives, blocked a second-quarter field goal attempt and held Carson to one first down in the second half.

“Major props to our defense. It played lights out,” coach Kenneth McClamrock said after East (1-4, 0-3) anchored itself in the conference cellar. “We had a great game plan against a really good offensive team. The defense kept us in the game and continually put us in position to win.”

The outcome wasn’t cemented until the game’s final minute. East quarterback Tate Houpe steered the Mustangs from their own 12-yard line to the Carson 32, sparked by Max Wall’s 14-yard run and a pass interference penalty. But on fourth-and-7, his final throw was knocked down by Carson senior Jacob McCurry with 41 seconds remaining.

“An intense game with some nervous moments,” McCurry said afterward. “But we stayed focused. On that last play I was spying the quarterback when I looked back and saw a receiver (East’s Keith Tillman) right behind me. I got nervous but the ball came right to me and I broke it up, probably should have caught it.”

What little offense the boisterous crowd witnessed came in dribbles, not spurts. Carson quarterback Owen White capped a 45-yard drive when he handed off to tailback Andy Lear for a 21-yard touchdown run off left tackle less than four minutes into the game. In the second period, White connected with Brandon Huneycutt on a 37-yard scoring pass midway through the second quarter. East returned fire in the third when Houpe found Tillman on a 15-yard crossing pattern in the end zone.

Carson’s defense and punter Cole Howard made the lead stand up. East reached the Carson 16-yard line late in the third period before Jerman picked off a pass in the end zone. And East’s final charge was thwarted by McCurry’s heads-up play.

Howard, meanwhile, helped the Cougars win the field position battle with seven booming kicks. “I did my part,” he said. “But this was the defense’s night.”

A defense that had to fight for everything. “We came out here with something to prove,” Bearden said. “We’re not going to be a passive defense. We were aggressive. We didn’t let them hit us. We hit them.”

By Mike London mike.london@salisburypost.com Twenty years have sailed by since West Rowan quarterback Tim Hogue was one of the state’s... read more