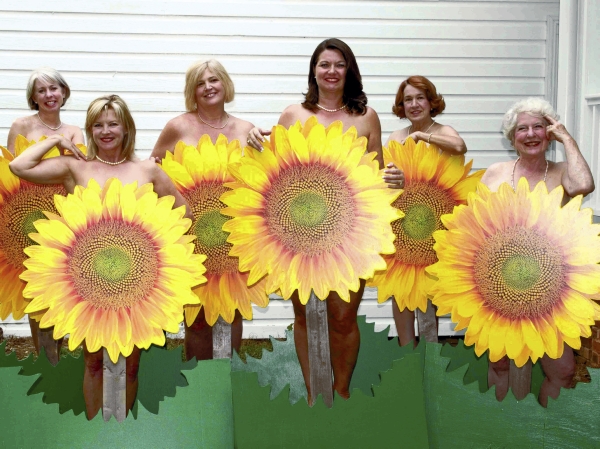 There’s a lot to see in ‘Calendar Girls’

“Calendar Girls” is sold out for its entire run — except, perhaps, for an extra performance on Wednesday, Sept. 23.

So, if you’re going to miss it, let me tell you about it.

It’s funny. Funnier because many in the audience know the actresses, several who are regulars on Salisbury stages, others new to the stage but familiar from other venues.

The play is based on the British movie of the same name, which was based on a true story about a group of women making a nude calendar to raise money in memory of one of their husbands, who had died of leukemia.

It just so happens the women are members of the Women’s Institute — church ladies.

By now, you may know that this group of intrepid actresses have also made a calendar, a real one, that is for sale at Lee Street Theater, Literary Bookpost and Sidewalk Deli. It will raise funds for a 3-D mammography machine at Novant Health Rowan Medical Center. Novant, indeed, is sponsoring the calendar. And three women involved in the play, including director Claudia Galup, are breast cancer survivors.

For a short time in the first act, the ladies seemed a bit uncomfortable, a little tentative, but the audience was so responsive, they warmed right up.

Debbie Hubbard-Pastore is Chris, who hatches the idea and coaxes, begs and pleads with the ladies to show their stuff for a good cause. Hubbard-Pastore has performed many, varied roles on local stages and captures Chris’ gutsy attitude. Maybe a little too gutsy, as the women discover later.

Newcomer Wendy Beeker (once of Zinc), is Annie, widow of the charming and personable John, whom we get to know briefly, thanks to Ray Stoddard’s subtle performance. John has a special love for sunflowers, which is why you’ll see so many on the stage.

Beeker has to play grief and enthusiasm and a lot of very intense emotions.

Cora, played by the veteran Mary Ann McCubbin, is a vicar’s daughter and former wild child who grumbles a lot but utters zingers that sent the audience into howls of laughter. As always, McCubbin’s timing is just right.

Jessie, played with sass by Linda Jones, is the lady with the most words of wisdom. She’ll undress anyway. And she’ll be very proud of it.

Beth Dixon plays Celia, the best-endowed of the group. Yes, that’s one of our judges, new owner of the former Blackmer home. Yes, this is her first time on stage. She’s hilarious and she swears she will never do it again. Great job.

Playing like a nervous cat (“I’m a rabbit”), Jennifer Hubbard is nervous Ruth, who swears she’ll buy 100 calendars, but she won’t be in it. Or will she?

Becky Lippard is very funny as Marie, the straight-laced, snobby head of the WI. Some of her physical comedy is as funny as her personality. It’s a treat to see her on stage again.

Theresa Pitner and Holly Grant, along with Danielle Rhodes, have smaller, but significant parts.

Len Clark, the one true Brit in the show, is likable Rod, Chris’ long-suffering husband. Clark gets to play tipsy, angry, disappointed. None of the other husbands are in the play.

Tony Moore has a funny, small part as Lawrence the photographer, who uncovers more than he was expecting. Patrick Hogan is Liam, a leering television director.

The women play well with each other, especially when it comes time, in the play, to shoot the calendar. Those moments are the best parts, where the women’s true selves are revealed — in more ways than one. It’s loads of fun.

Then things take a serious turn as they start getting letters from other people who have suffered loss, either of a loved one or their own self-confidence. It’s a touching time on stage, only to be topped by the very emotional ending. First, there’s tremendously good news about the money they’ve raised, and then, it’s time to pay tribute to John.

I hope you have a ticket.

The play, presented by Center for Faith & the Arts, continues through the weekend and again next week, Wednesday-Saturday, at Lee Street theatre. It is underwritten by Yatawara Gynecology, Wellness and Aesthetics. To see if there is a waiting list for tickets, you may contact 704-310-5507.

One person was shot in the groin Thursday evening during an incident near Salisbury High School, according to Salisbury Police.... read more