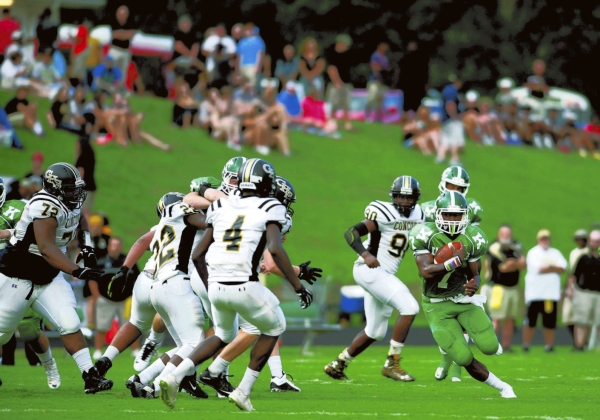 KANNAPOLIS — For A.L. Brown coach Mike Newsome, last November’s 50-42, playoff loss to Reagan was one of those watershed moments.
Basically, it was the last straw. Score 42 points in a high school game and you should win. Score 42 in a 4A playoff game on the road against a stout opponent and you absolutely have to win.
But the Wonders lost.
“I’m standing there on the sideline watching our guys play and we can’t stop Reagan,” Newsome said. “And Jayln Cagle and Sandon McCoy and Alex Hubbell, some of our best players, are standing there behind me. They’re watching too, waiting to go back in the game when we get the ball back. I decided that night we weren’t going to lose another ballgame without having our best guys on the field. We might get beat, but our best players will be on the field.”
A.L. Brown averaged 36.8 points per game last season and still went 6-6. Preceding the last-straw loss to Reagan were shootout conference setbacks — 48-35 to Vance and 52-35 to Mallard Creek — that resembled track meets.
But the feeling in the locker room and the coaches’ office is that it’s a new day in Kannapolis.
Many players, including Cagle, McCoy and Hubbell, are now counted on to play heavy minutes on both sides of the ball. Juan Morgan has added sacks to his pancake blocks. Brandon Dry is now recovering fumbles on defense when he’s not catching TD passes.
Conventional wisdom says you can’t do that in 4A, a division where you’re supposed to have enough bodies and enough athletes to two-platoon, so give Newsome credit for thinking outside the box. The Wonders are 4-0, but maybe they don’t beat good Concord and Mooresville teams without their studs playing both ways.
“We’re giving guys a lot of practice reps on both sides of the ball,” Newsome said. “It’s been a good thing. It’s made us deeper.”
There was a gleam in Newsome’s eyes as he talked about working sack-master Dantrell Barkley into the mix on goal-line offense during the current open week. And so it goes.
The Wonder most affected by Newsome’s decision to play throwback football is Cagle, who’s been transformed from a good running back as a junior (93 carries, 623 yards, 9 TDs) to a holy terror as a senior.
Cagle (5-foot-11, 190 pounds) may be a 48-minute man in the conference games that lie ahead. Besides breaking runs and catching passes, he’s now a devastating free safety and he’s also a key guy on electric special teams, either making the return or making the hit.
“I do get tired, but when I do, I can tough it out and fight through it,” Cagle said. “I love it. I love playing both ways.”
Cagle, who arrived at A.L. Brown shortly after showing great promise at West Rowan Middle School, prepared for his expanded role in the offseason by running hills with his father.
Cagle’s season opened with a crushing block in the Concord game that freed QB Damon Johnson for a long run, and he put the Spiders away with a daring punt return. He hasn’t let up.
His stats are 272 rushing yards, 133 receiving yards, 143 kickoff return yards, 164 punt return yards, six touchdowns and 18 tackles.
After his super game against Concord, the Wonders didn’t have to unleash Cagle against overmatched South Rowan and Northwest Cabarrus, but he stood tall in Friday’s 23-9 win against Mooresville. He scored both of the Wonders’ TDs and recovered a muffed punt.
Cagle’s 98-yard kickoff return in the second quarter was the turning point.
“Mooresville scores, but then we score on their kickoff and that nullifies it,” Newsome said. “When a team scores, but then you score right back, it takes a lot of air out of them. That kickoff was huge. We’re down 9-3, but Jayln scores, Nate Williams kicks the extra point, and we go up 10-9. That kickoff return was the catalyst for winning the game.”
Cagle didn’t over-think the critical kickoff return.
“All I was thinking was that the team needed a play and I wanted to make it,” Cagle said. “We set up a good wedge. Sandon (McCoy) made a big block for me. Cinsere Allison made the last block. He got the kicker.”
Newsome said what may have been Cagle’s most athletic play all night got overshadowed by his kickoff return and his 21-yard touchdown run in the third quarter.
“We threw an interception early that would’ve been a pick-six for them, but Jayln makes the tackle, and then we’re able to hold them to a field goal,” Newsome said. “His offense shows up and his defense shows up, but sometimes he’ll make a great play that doesn’t get noticed. He’s constantly making plays all over the field.”
That touchdown-saving tackle was one of nine stops Cagle registered on Friday.
Cagle is a good student, and while he’s managed to stay under the recruiting radar a long time, that should change as soon as the Wonders start tackling high-profile opponents from Charlotte.
“I’m being patient with that,” Cagle said. “As long as the team wins, everything is good.”

By Dennis Davidson dennis.davidson@salisburypost.com At 6-feet, 330 pounds, Livingstone’s Eric Horne is an anchor of a defensive lineman that opposing... read more