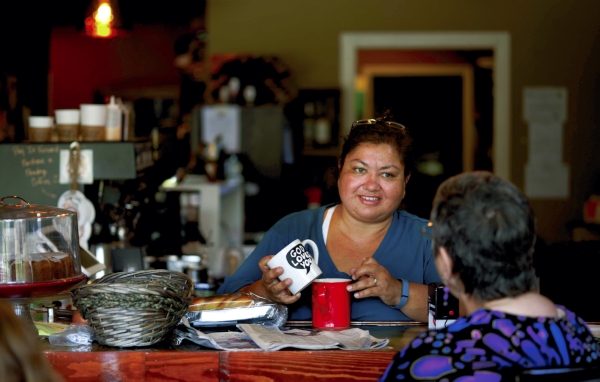 Paper medallions strung with twine swing gently from a coat rack by the door. The wood plaque above them reads, “Do something amazing each day.”

It started simply: A few months ago, Medina noticed a woman standing outside her coffee shop at 1024 S Fulton St. asking customers if they could donate money for a cup of coffee. Medina confronted her.

Medina invited the woman inside, pulled out a cup, and wrote the woman’s name on it with a pen. She told the woman if she ever wanted something hot to drink, to just come in and ask, and she’d get it, free of charge. Not too long afterwards, Medina was approached by community members about starting a pay it forward campaign. She jumped on eagerly.

Pay it forward is a movement that began in Naples, Italy, after World War II, where customers can purchase an additional “pending” coffee that is made available, discreetly, to members of the community who may be down on their luck. It’s become a worldwide movement in coffee shops and restaurants, and now, Medina has brought it to Salisbury.

Pay it forward at Mean Mug is as simple as the concept can get, Medina says. Just ask the barista if you can purchase a pending coffee along with your regular order — it’s $1.75, the cost of a regular, small coffee. A paper tag with the Mean Mug logo is placed on a hook by the door, easily visible from the street. If someone needs a coffee, but can’t afford it, they pick up a tag, take it to the barista, and receive a regular coffee, any size, with cream or sugar.

Medina says she loves the idea because it helps preserve people’s dignity. If money is tight, if you’re homeless, you don’t want to beg.

“There’s no sense of having to ask for something,” Medina said. “You’re treated just like any other customer.”

And it’s more than just providing someone with something warm to drink on a cold morning. When it comes down to it, collecting $1.75 for a cup of coffee isn’t hard — but pay it forward provides a different kind of warmth. It’s knowing that someone cared enough to buy a cup of coffee for a stranger, without expecting anything in return, without expectation of thanks, and with no sense of obligation or embarrassment for the grantee.

Medina says that one of her goals with the campaign is for people to realize that helping out those in need doesn’t fall solely on business owners or on organizations—the responsibility falls on everyone in the community.

“Part of belonging to a community is taking care of the entire community,” she said.

It’s why Medina makes sure Mean Mug is open and available to anyone who needs it. Too often coffee shops try to present an elitist atmosphere, or have a clinical corporate feel — but Medina says she wants Mean Mug to feel like home.

“I want people to perceive this as a community coffee shop,” she said.

A former Los Angeles resident, Medina is used to diversity and welcomes people from every section of Salisbury society. It’s one reason she hosts so many community events, from a game night to an open mic night to the monthly peace circle meetings. It’s why her shop doesn’t have a loitering limit, and it’s why she started pay it forward.

Since Mean Mug started allowing customers to buy pending coffees a month ago, the response has been incredible. The line of medallions is refilled faster than it’s emptied, and Medina says she already has regular pay it forward customers. And best of all? She knows that she’s providing another opportunity for people to look after their neighbors — to do something amazing each day.

“It’s been an amazing month,” she said.