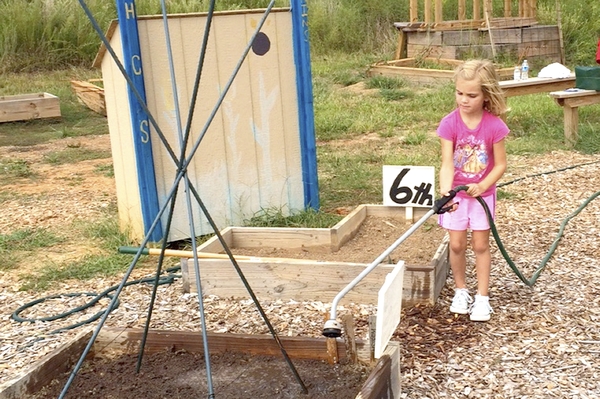 Knowledge also grows in this garden Submitted photo On the right is Andrew Beaver, helping J.P. Vaeth (in white). In back are John Coello, in brown, and Cooper Fleeman in black, members of the Master Gardeners Club at Sacred Heart Catholic School.

Garden season may be winding down, but students at Sacred Heart Catholic School are busy working in their raised beds, preparing for a fall crop.

Children in all grades benefit from the garden, says Hillary Shores, the middle school science teacher who has spearheaded the program.

With help from Extension Master Gardener volunteer Randy Cox, the garden has been growing for about three years.

“In the fall they plant bulbs and flowers,” said Shores, “and they mulch things to prepare for winter.”

The best part of the garden so far, she said, was last June, when students dug potatoes.

“You’d think we were digging up huge gold nuggets,” they got so excited. “They’d hold one up and say, ‘I got one!'”

In the spring, they had tomatoes and cucumbers. They’ve already harvested Indian corn this year, as well as sunflowers.

“The kids really enjoy the hands-on. They love to get dirty,” Shores said. “Just to see the joy on their faces, a picture cannot capture how much they enjoy it.”

They started with two planter boxes. Now, every class has its own box and there are some extras where they will put in blueberries, blackberries and raspberries, along with a fig tree and a dwarf apple tree.

The students don’t just dig and plant and harvest. “It’s not just science or after school. They’ve done math, they’ve done soil samples, with pH and minerals. We’ve gone out and collected bugs and observed them. Then they write about it in the classroom, so it’s not just STEM (science, technology, engineering and math), it’s cross-curricular.”

There hasn’t been quite enough harvest to provide for what’s needed in the cafeteria, but they’ve been able to use herbs from the garden and some lettuces. “We’re not self-sustaining yet, but we hope to get there.”

Sacred Heart is also building an outdoor classroom, with benches that will seat 30 students. A demonstration table will allow teachers from any class to use the area.

“We’re working on building a bioshelter, which is very similar to a greenhouse. We’re not going to have year-round plants, but for most of the year.”

Shores said it’s been a partnership between the school and the Cooperative Extension Service.

Even the children in pre-kindergarten have helped. After snack time, they collect the leftovers, even the water, and put it all in a bucket and it goes into the compost pile. The middle-grade students work with the pre-K students on projects.

“The best thing was one girl told me she knew not all food came from the grocery store,” she said she’d seen large farms, but she never knew you could grow your own food.

“We do it all,” Shores said. “We start seeds in the classroom, then they can take it outside — they do it from start to finish.”

Shores says the students are getting quite an experience, and not just the ones in the Master Gardener Club.

“Every summer, we plant sunflower seeds and harvest them and then replant. Last year, we worked with pre-K and they made bird seed out of it.

“The best thing about it is every single class class in the school can participate.”

Clement shares insights on preservation at opening of state conference

By Mark Wineka mark.wineka@salisburypost.com SALISBURY — Ed Clement would scoff at the idea he’s the Father of Preservation in Salisbury,... read more