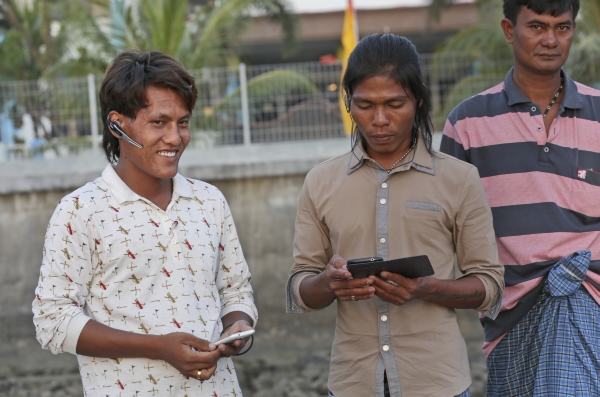 In this Sept. 9, 2015 photo, Burmese fisherman Myo Aung, left, chats with his friends outside their temporary shelter in Ambon, Maluku province, Indonesia. Myo Aung took a fishing job that he thought would keep him close to home in southern Myanmar, but he ended up thousands of miles away with no chance of return for five years. The 25-year-old is among more than 2,000 fishermen rescued this year from forced labor under brutal conditions, mainly in remote Indonesian islands, following reporting by The Associated Press and subsequent investigation by Indonesian authorities. Last week he was on Ambon island, awaiting his return home. (AP Photo/Achmad Ibrahim)

The candidates wrangled over immigration, gay marriage, foreign affairs and other issues.

2. THOUSANDS POUR INTO CROATIA AFTER CLASHES

The move sets up a new path toward Western Europe after Hungary uses tear gas and water cannons to keep refugees out of its territory.

3. DECISION ON RATE HIKE MAY BE A TOSS-UP

The Federal Reserve may finally begin raising its benchmark rate from record lows, possibly heralding higher lending rates in an economy that is much sturdier than the one it helped rescue in 2008.

4. WHAT EXPERTS CALL BIGGEST-EVER RESCUE OF ITS KIND

Since the world was alerted by the AP to a slave island in Indonesia just six months ago, more than 2,000 men have been identified and sent home.

A magnitude-8.3 temblor in the Pacific rattles Chileans, killing at least five people and shaking the Earth so strongly it is felt on the other side of the continent.

Encouragement pours in from across the nation for Ahmed Mohamed, a 14-year-old Muslim boy in Texas, whose homemade electronic clock led to his arrest and suspension from school.

Determining which restroom a transgender high school student uses is a new and modern question for the rural eastern Virginia county of Gloucester.

Federal prosecutors reach a deal with the automaker to resolve a criminal probe into how it broke the law by concealing a deadly problem with small-car ignition switches, sources tell AP.

“The Tonight Show” host calls the Democratic presidential candidate a “tough mother” and pulls her hair at her invitation.

10. WHY AUTHORITIES ARE CONCERNED ABOUT STADIUM DRONES

While most are flown by hobbyists, law enforcement is worried and trying to figure out how to stop them from doing major damage at sporting events.

Rowan weather: Warming up for the weekend