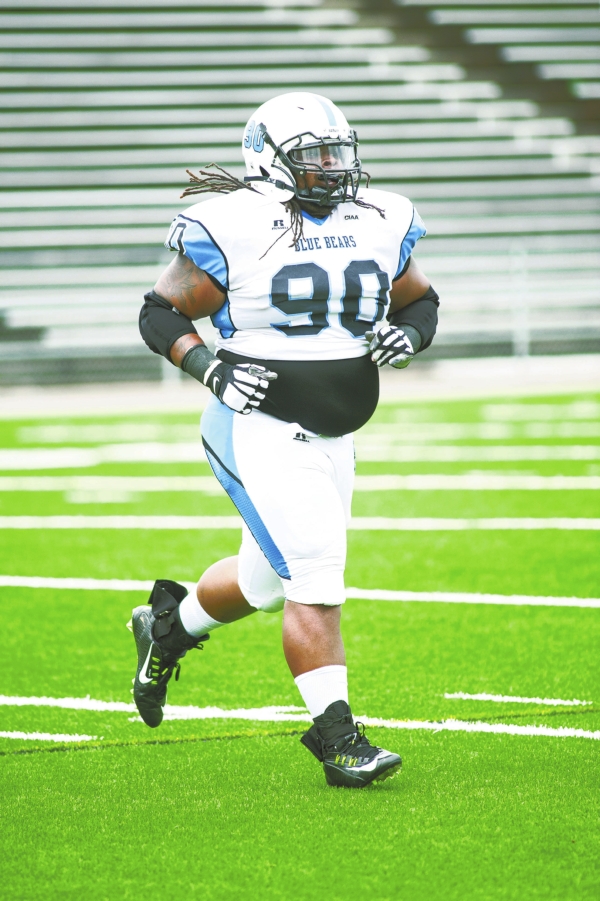 At 6-feet, 330 pounds, Livingstone’s Eric Horne is an anchor of a defensive lineman that opposing offensive linemen have trouble moving.

Unless he wants to move.

“Actually, his strength is running to the ball, in addition to being very strong,” said Livingstone head coach Darryl Williams. “He can get that 300 pounds moving when he wants to.”

Williams added that Horne, a senior from Monroe High School, is one of his defensive leaders.

“Horne is as steady as he can be … he’s refused to lose weight and I’ve accepted that but he can play with that weight and he’s a leader,” said Williams. “He’s a senior and I expect a lot out of him, but he still surprises me every week. He brings his hard hat to play every week.”

A sports management major, Horne’s perseverance is a lesson for anyone who might have been told “no” about pursuing their dreams.

A member of a high school football team that was small in numbers, Horne was not recruited by any college during and after his senior season. He found his way to Shaw University in Raleigh, and was just a student, not a member of the football team.

“I talked to the head coach at Shaw about trying out for the team, but he wasn’t interested and actually made comments that didn’t sit well with me,” said Horne, who seems to be a gentle giant off the field. “That was a setback, but I wasn’t giving up. I was going to find a way to play college football. I didn’t know how or where at the time, but my dream was to play football again.”

Horne soon got the break he needed when Livingstone assistant coach Greg Richardson was beating the bushes for defensive linemen and one of the schools he contacted was Monroe High School. The Monroe coaches mentioned that Horne was available and was enrolled at Shaw but not a member of the team.

Horne transferred to Livingstone in 2012 and is now a four-year player. And yes, Horne does play with more motivation against Shaw, like Livingstone, members of the CIAA.

“Yes sir, definitely motivated against Shaw,” confirmed Horne. “I had a sack the first time I played against them several years ago and it was fun to come out on top in the Shaw game (21-20) last year.”

Horne, who just turned 23, is thankful for the opportunity he’s had at Livingstone.

“It’s the love of the game,” said Horne. “Football is what I love to do. There’s nothing else like putting on that uniform every day. And we have a great coaching staff here and they are behind me 100 percent. They gave me an opportunity and they keep me going, too.”

Horne’s position coach is Rodney Hughey. He credits Hughey with making him a better player.

“I’ve grown so much, football-wise, during my career,” said Horne. “I understand so much more  and I feel that I’m getting faster, even though I still weigh a lot. But a lot of it goes back  to anticipating where I need to be and that comes with preparation and experience. But I want more and more sacks. Stopping the run is my main job, but all D-linemen want sacks.”

Fans will have their first chance to see Horne and the rest of the 2015 Blue Bears this Saturday when Livingstone hosts Central International University at 1 p.m., in Alumni Stadium.

Livingstone, 1-0, defeated Benedict in its opener on Sept. 5, 49-6. In that game, Horne had four tackles a half-sack and blocked an extra point kick.

Last week, the Blue Bears trounced Virginia University-Lynchburg, 48-19, in a non-countable game per the NCAA. This week’s game falls into the same category, unfortunately.

“We’re excited about the first home game,” said Horne. “When someone comes into your house, you don’t let them off easy … we going to be after them all game long.”

Pro Baseball: Peeler learning the ropes, happy with his decision