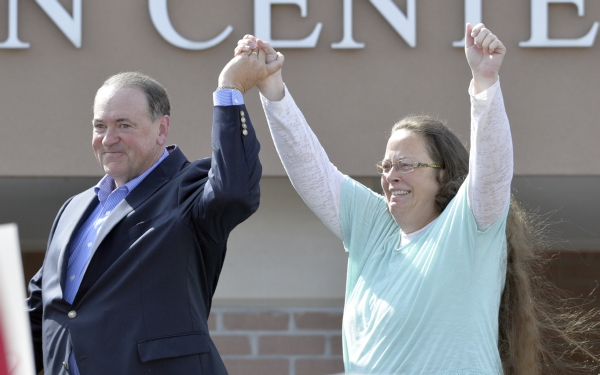 Rowan County, Ky., Clerk Kim Davis, with Republican presidential candidate Mike Huckabee at her side, greets the crowd after being released from the Carter County Detention Center, in Grayson, Ky.

From a column by Byron York, chief political correspondent for The Washington Examiner:

The case of Kim Davis — the Kentucky county clerk jailed for refusing to issue gay marriage licenses — has highlighted a deep cultural gap in the Republican Party. And no one has exploited that gap more than Mike Huckabee, the former Arkansas governor running for president.

Huckabee, author of the flyover-populist manifesto “God, Guns, Grits, and Gravy,” jumped on the Davis case at the beginning. His advance staff traveled to Grayson, Kentucky, and spent days organizing the Sept. 8 “I’m With Kim Liberty Rally.” The day before, news came that Davis would be released, and she ended up the star at her own rally.

When Davis took the stage, joined by husband, Joe, more than a few urban Republicans watched in either amusement or dismay. With praise to Jesus, white crosses held high in the audience and Joe Davis in overalls and a hat, the televised scene struck some viewers as almost a Hollywood caricature of downscale religiosity. … One conservative writer called Davis “the Honey Boo Boo of religious freedom.”

Beyond the undeniable cultural condescension, the Davis case has divided Republicans on the substance of the issues involved. Actually, they are united in believing Davis should not have been jailed. But beyond that, they are divided on gay marriage, and (the majority of) gay marriage opponents are further divided on how to press the case for religious freedom in light of the Supreme Court’s marriage edict.

Huckabee is the farthest out there, arguing the court decision is not law. “In the case of this decision,” Huckabee told radio host Michael Medved recently, “it goes back to what Jefferson said, that if a decision is rendered that is not borne out by the will of the people either through their elected people and gone through the process, if you just say it’s the law of the land because the court decided, then Jefferson said, ‘You now have surrendered to judicial tyranny.’”

In addition, Huckabee argues the Supreme Court decision does not override the Kentucky state constitution, which was amended with overwhelming popular support in 2004 to ban gay marriage. “That’s the law (Davis) was elected under,” Huckabee said on MSNBC. “That’s the law she served under. It’s the law she took an oath under.”

Whatever else it was, the Davis rally was a show of organizational strength by the Huckabee campaign. Drawing 5,000 people to a rally in a tiny town — the schools were closed in anticipation of the crowds and congestion — is no small achievement. …

So there was intensive politicking behind the scenes at the “I’m With Kim Liberty Rally.” Some Republicans — call them establishment, coastal, urban or maybe just snooty — looked down their noses at the spectacle. But there was serious business going on, and Mike Huckabee hopes it will serve him well in months to come.