The law is the law, even in (other) Rowan County 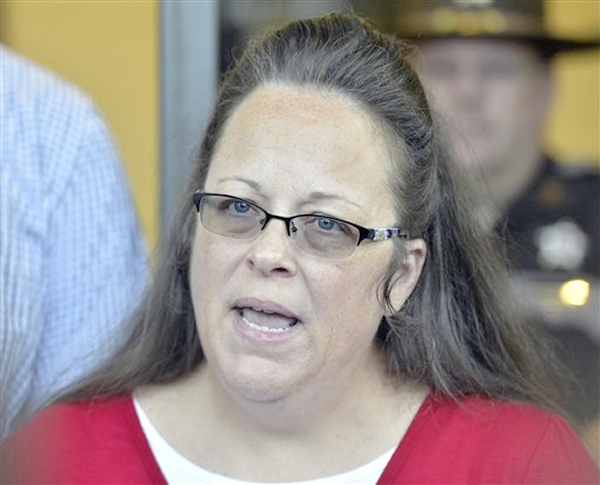 Rowan County, Ky., Clerk Kim Davis announced Monday that her office will issue marriage licenses under order of a federal judge, but will not have her name or office listed. (AP Photo/Timothy D. Easley)

Kim Davis went back to work Monday as the clerk of Kentucky’s Rowan County. Carmen and Shannon Wampler-Collins got a marriage license Monday from the clerk’s office. And thus one of the prime clashes in the modern culture wars appears to have been resolved with a fairly simple accommodation.

As an Apostolic Christian, Davis says her religion prevents her from sanctioning gay marriage. The U.S. Supreme Court has ruled that the Constitution guarantees same-sex couples the same rights as heterosexual couples.

So when two men requested a license, Davis refused, saying she was acting under “God’s authority.” A federal judge ruled that she was obligated to issue licenses to all qualified applicants. When she continued to resist, he held her in contempt and put her in jail.

In her absence, her staff resumed providing licenses, including to same-sex couples. The judge then released her because her office was complying with its legal obligations. He ordered her not to “interfere in any way, directly or indirectly, with the efforts of her deputy clerks to issue marriage licenses to all legally eligible couples.” This time, apparently, she obeyed.

Davis’ recalcitrance should be galling to anyone who has respect for the rule of law. Government bureaucrats don’t get to decide what sort of marriages are allowed. Once the Supreme Court has spoken, the issue is settled.

It doesn’t matter if Davis has a sincere religious objection to same-sex marriage. Those couples have a right to marry, whatever her views.

The judge brokered a compromise under which Davis plays no personal role in issuing marriage licenses, while authorizing others in her office to provide the licenses.

This is reasonable, up to a point. The federal government and 21 states do recognize that some legal obligations impose too heavy a burden on the freedom of religious believers to practice their faith. The federal Religious Freedom Restoration Act of 1993 was aimed at accommodating faith-based objections where practicable. It was not controversial at the time, passing both houses of Congress by overwhelming votes.

It allows religious people exemptions from some obligations that fall on everyone else.

Davis insisted that under Kentucky’s law, a marriage license must be issued by the clerk _ not simply the clerk’s office. By that reasoning, her religious beliefs trumped the constitutional rights of same-sex couples who sought to get married in Rowan County.

The county attorney and the state attorney general disagree; they say the licenses granted while she was in jail, without her personal approval, are valid.

The judge’s handling of this feels like a fair resolution, under the circumstances. Davis can perform her job without violating her conscience or the rights of those who seek the services of her office.

That doesn’t mean government can or should be expected to make such accommodations routinely. Same-sex marriage is now legal in all 50 states.

If Davis or any other government official can’t accept that, they should follow the cue of President John F. Kennedy, who, in seeking to become the first Roman Catholic president 63 years ago, said: “If the time should ever come _ and I do not concede any conflict to be even remotely possible _ when my office would require me to either violate my conscience or violate the national interest, then I would resign the office; and I hope any conscientious public servant would do the same.”

Same-sex couples such as Carmen and Shannon don’t need the clerk’s blessing to get married; they just need a license from the state of Kentucky. They ought to be able to get one without any drama.