Rembrandt raccoon one of many animal artists at Dan Nick 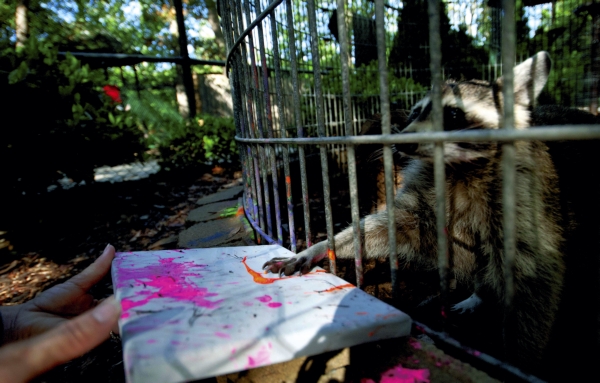 Roxy the raccoon is more then happy to take part in finger painting for a fundraiser to benefit Rowan Wildlife Adventures at Dan Nicholas Park. Staff members are helping bears, snakes, turtles and even a chicken put paint to canvas to create art suitable for hanging. The animals’ works will be sold at Autumn Jubilee, Oct. 3-4 at Dan Nicholas Park. Jon C. Lakey/Salisbury Post

SALISBURY — When it comes to being an artist, Roxy the raccoon is a natural. Bring out the paints and canvas, and Roxy can’t wait to dive in.

“She loves it,” says Megan Cline, an assistant naturalist for Dan Nicholas Park’s Rowan Wildlife Adventures. “She is a very tactile animal. Raccoons love to touch and feel things, and she loves to manipulate things.

“When it comes to painting, she gets very excited.”

The staffers at Rowan Wildlife Adventures have become museum curators in recent weeks. They’ve called on part of the park’s menagerie — including bears, a pig, a chicken, bobcats, turtles, snakes and alligators — to create pieces of art.

Those paintings will be sold at this year’s Autumn Jubilee, held Oct. 3-4 at Dan Nicholas Park.

The funds raised will go toward more “enrichment” items for the animals. Because the animals are in captivity, the park staff tries to find things to stimulate their minds and bodies. Painting helps, and as much as possible, “We want to mimic what they would naturally be doing in the wild,” Cline says.

The activities also help break up the animals’ day and give them something new to do.

Roxy is naturally curious, and what she does with the non-toxic paint on a canvas is similar to young kids finger-painting.

When the bears paint, the staff uses a PVC pipe hooked to the mesh of a cage so it can’t be pulled through. On the bears’ end goes a tasty concoction of, say, peanut butter and honey. On the other end of the pipe a paint brush is attached, and as the bears lick up every bit of their snacks, the paint brush is making all kinds of movements over a canvas that someone such as Cline dutifully holds.

“Both of our bears paint,” Cline says, “but Ruff is kind of the star.”

Cline expects about 30 paintings to be offered, ranging in price from $10 to $40. The $40 painting will be a 16- by 20-inch canvas painted by Allie and Little Man, alligators at the park.

Also, a similar-sized painting by Ruff the bear will be a raffle prize at Autumn Jubilee. The painting will come with a cast paw print of Ruff and a picture of him painting.

“I’m pretty excited about it,” Cline says. “If it does well, we may continue it and have them available at other times.”

Heather Key, one of the animal keepers at the park, first suggested making artists out of the critters. “I really liked the idea, but I wasn’t sure how it would play out,” Cline says.

Another animal keeper on the staff, Sam Kearns, is a good artist herself, and she has made some of the animals’ art better by first putting a backdrop on some of the canvases.

“It creates a little extra dimension to it,” Cline says.

With the chicken, bobcat, turtles, snakes, alligators and pig, the Dan Nicholas staff has figured out ways for them to slither or walk over the canvases with the non-toxic paint on the bottoms of their feet or bodies.

Ginger, the park’s pig, also likes to have her rear end painted, and some good art usually results when that happens.

“We do have quite a few pig paintings,” Cline says.

You don’t hear that every day.