Thanks to Cochran, Old Stone House getting snake-rail fence 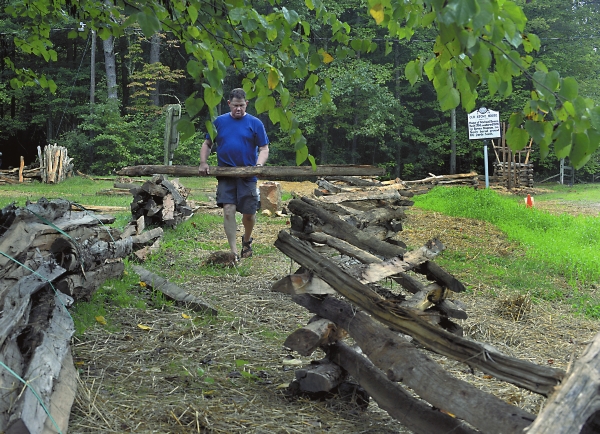 Robbie Cochran carries a black locust tree split rail to be added to the "snake rail fence" that he is building in front the the Old Stone House. Photo by Wayne Hinshaw, for the Salisbury Post

GRANITE QUARRY — This kind of fence goes by many names — snake-rail, worm, zigzag or battlefield fence. But it’s a thing of simple, beautiful efficiency that old-timers would have said is horse-high and hog-tight.

For the purposes of this story, call it a snake-rail fence, something that Robbie Cochran is building by himself along the road side of the Old Stone House, which will be 250 years old in 2016.

After this fence-building experience, the 55-year-old Cochran ought to go into business for himself. Using some 400 black locust rails shipped in from Deep Gap and large stones pulled mostly from the creek bed on the Old Stone House’s 27 acres, Cochran has fashioned a new entrance and a 250- to 300-foot border for Rowan County’s only surviving Colonial home.

Cochran has done it without fasteners or nails. The stones offer a base point at each zig and zag, keeping the rails off the ground. The weight of the interlocking rails holds them all in place.

Cochran has gone five rails high, and at each juncture, he adds upright poles as cross-bracing for stability.

“The cross-bracing gives it a lot of strength,” he says.

No two of the splintery rails are alike, which gives the fence a lot of character and a rustic look. It’s also much more period appropriate than the modern split-rail fence that was up previously. In its day — the Old Stone House was built by Michael Braun in 1766 — this kind of fence would have kept livestock in and animals such as bears and wolves out, Cochran says.

“I think it’s going to make the property look a whole lot better,” he adds.

The black locust, more prevalent in the mountains than here, is a tough wood that should last 60 to 80 years. In Braun’s day, rails fashioned out of chestnut were usually used in fencing. Cedar also is another common wood used for fence rails. Cochran likes the look of this black locust. As it dries and ages, it will turn gray like cedar.

What made snake-rail fences so practical was they were easy to build, repair, dismantle and relocate. After logs were split into the rails, you didn’t need many tools to build the fence. Cochran has required only a posthole digger to carve out small pilot holes for the cross braces.

“Nails were expensive,” he adds of the 18th century period when this kind of fence would have been built. “You couldn’t waste nails on fencing.”

By day, he works for Salisbury Parks and Recreation Department. But on his way home to his house near the High Rock Dam, Cochran often stops by this historic property, if to do nothing else than enjoy the peace and quiet.

When it came to planning the snake-rail fence — these are sometimes seen on the Blue Ridge Parkway, too — Cochran went to Old Salem and Bethabara Park and took photographs of every detail in the fencing there. It was just a matter of recreating the zigzag pattern and an entrance when he got back to the Old Stone House.

A late 1800s photograph of the Braun (Brown) family cemetery across the road shows a snake-rail fence in the background, so Rowan Museum (owner of the Old Stone House) feels comfortable that this kind of fence could have been in place.

The black locust rails were delivered one day in a tandem dump truck. Larry Brown and his four-wheeler were a huge help in getting the rocks from the creek to the fence site.

Once the rocks are laid out and the first rails are in place, Cochran says, things go pretty quickly. The fence is costing about $4,000 to $4,500. Rowan Museum’s successful fundraising and has led to some extra money, which probably will be used to re-create the bake oven that was once located between the Old Stone House and its dependency.

Cochran has done some excavating and marked the corners of where the bake oven was. He also has found brick that was part of the oven, which he hopes Old Carolina Brick will be able to reproduce.

Cochran never tires of being part of the Old Stone House and any enhancements to this historic attraction.  A new 39-space parking lot is being constructed across the road and beyond his fence.