City buzz: Ted Goins is an urban beekeeper on his downtown rooftop 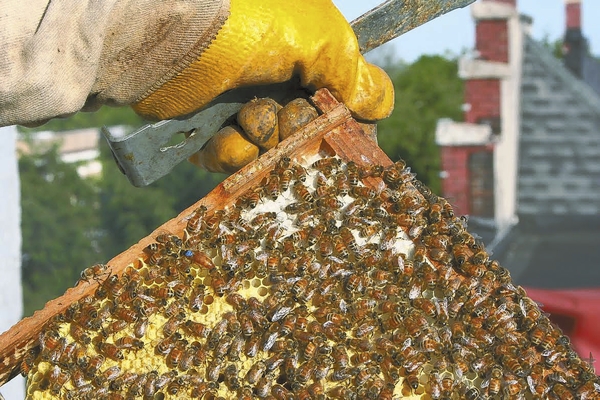 With her blue dot, the queen bee can be seen directly below the end of the tool in Ted Goins’ left hand. Susan Shinn/For the Salisbury Post

You’re not afraid of being stung, are you?”

That was the text I received from Ted Goins before I paid him a visit one evening this spring. Ted is a local beekeeper, and, since his hive sits atop Pottery 101 on South Main Street, he’s considered an urban beekeeper.

I was not afraid of being stung until Ted brought it up. Not to worry, he said, the bees would be “docile.” I had no idea what he meant, but I was about to find out.

Turns out beekeeping is in Ted’s blood.

“I helped both my grandfathers keep bees when I was growing up,” he said of L.E. Summer of Dallas and Maurice Goins of Vale.

He remembers that his grandfather Goins never wore a bonnet or used a smoker when working with bees — but he did smoke a cigar.

Smoke is the key to keeping bees docile.

Ted’s own father at age 10 had a side business of getting honey. At one time, Ted and Ted Sr. kept 12 hives, but lost them all because of mites. His father finally got out of the bee business last year, when the last hive died.

But Ted wasn’t willing to give up.

So he did what a lot of people do nowadays — he ordered bees. He put them in brood boxes — those white, square wooden boxes you’ve probably seen — that belonged to one of his grandfathers. One hive sits on the roof of his home — he and wife Cheryl live above her business — and the other is situated at the home of Doug and Beth Kearney, a few blocks away.

In the spring and summer, Ted checked the hives on a weekly basis.

“Since they’re new hives,” Ted explained, “they have to put up enough honey and make enough bees to get through the summer and winter. Next spring, if they start strong, I should be able to take a good bit of honey off them.”

You’d think bees might have a hard time finding food from the city square. Not true, Ted says. Bees fly up to 3 miles in any direction to find food.

“That covers every park in Salisbury, and every yard,” Ted says. “Think of all the trees and flowers. Think of Hurley Park, and all the beautiful gardens on Fulton Street. Every cucumber that blooms in the city limits and every flower that’s blooming good, I’m taking credit for this year. Anything that blooms and needs pollination, needs bees.”

When the nectar flow is high, as it is in spring and summer, that’s when the bees make their honey.

Then it was time to check out the hive.

“You’re not afraid of heights, are you?” Ted asked.

The view was worth it and the bees were busy. Ted did take his bonnet, gloves and smoker, and in no time, the bees were indeed docile. He carefully checked each rack in the frame of the hive. The queen bee has a blue spot on her back — and he found her in no time. He repeated this process over at the Kearneys’, but he never did find the queen there.

This week, Ted reported he’d had a good season.

He noted that the bee infestation at Catawba College this spring created, ahem, quite a buzz. “Overall, the situation was good for beekeeping. It raised the community’s awareness that bees are everyone’s concern. Without them, our world would be different and harsh, maybe even over.”

He added, “Beekeeping is hard but rewarding and necessary. My bees did not store enough honey. I’ve already had to start feeding them, and I’ve heard the same from other beekeepers. Feeding is expensive and takes time. But if they survive, they will be ready to take off in spring.”

For more information about beekeeping, visit the Rowan County Beekeepers Association on facebook.