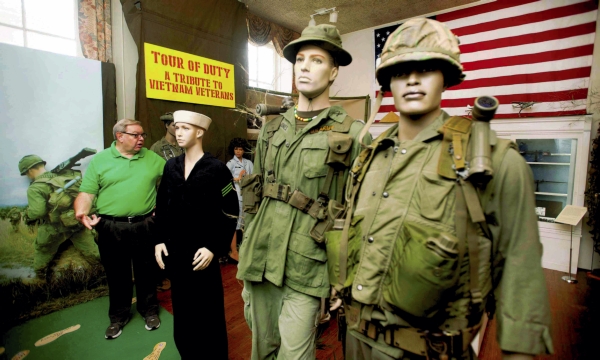 JON C. LAKEY / SALISBURY POST Terry Holt (left) stands among the several mannequins with military uniforms and equipment on display. The Rowan Museum has been working to put the finishing touches on their new exhibit to commemorate with the 50th anniversary of the Vietnam War. Wednesday, September 9, 2015, in Salisbury, N.C.

SALISBURY — These bootprints leave a mark.

On the floor and in display cases of Rowan Museum’s new exhibit, “Tour of Duty,” visitors will come across wooden bootprints signed by Vietnam veterans and including their names, ranks and service dates.

Twenty of those bootprints also have special components, symbolized by American flags, that can turn smartphones and tablets into story-telling tools. It’s a technology called augmented reality, which Smithsonian.com defines as “the notion of enhancing objects in the real world with virtual sounds and images of additional information.”

The additional information a visitor receives by pointing his smartphone or tablet at a bootprint is an interview with the same Vietnam veteran whose name is on it.

While any museum visitor will be able to use the dedicated app, Rowan Museum especially wants students, equipped with their school-issued iPads or personal smartphones, to bring the Vietnam veterans’ stories to life with this technology.

Today’s opening will include a reception sponsored by the Elizabeth Maxwell Steele Chapter of the Daughters of the American Revolution. Meeting in the second-floor Messinger Room, DAR members will be presenting certificates of appreciation to Vietnam veterans.

The Rowan County Veterans Honor Guard, which recently won a national championship for advancing and retrieving colors at the American Legion Convention in Baltimore, also will give a special tribute at 2:30 p.m.

Throughout the life of the exhibit, the museum will be collecting Vietnam veterans’ stories and experiences to enhance the exhibit.

Museum officials say the augmented reality technology was funded through a gift from the Rowan County Board of Commissioners and installed by Alert Alarms, SCS Services and Jason Stanley of the Rowan-Salisbury School System.

Once again, the lead designer for the exhibit was Terry Holt, who also serves as president of the Rowan Museum board.

“It has been an honor to do this,” Holt said.

Holt said it was not difficult in finding Vietnam veterans willing to share their stories from a war that proved divisive for the country. He gives some of the credit for that to the regular Tuesday morning coffee gatherings for veterans at Thelma’s restaurant.

Bob Bailey, a Vietnam veteran who also was a fine photographer, provides the exhibit with many images of the Vietnamese people. Overall, the exhibit tries to examine why the United States was in Vietnam, describe some of the major players, give insights into the Vietnamese people and soldiers and offer up Vietnam-era artifacts provided by collectors and the veterans themselves.

The real impact comes, however, in hearing the veterans’ personal stories. Holt said it was emotional for him during the planning stages to see the veterans and hear them bare their hearts and souls in the interviews.

Telling these stories are pilots, surgeons, sailors, medics, members of Special Forces, POWs, MPs and infantrymen. Stanley, of Carson High School, led the efforts to record and edit all the interviews, which are about two to three minutes each.

Holt said museum visitors will be asked not to share those stories elsewhere on social media as they go through the exhibit. “These guys came in with very private stories,” he said, feeling a sense of obligation to keep them confined to the exhibit.

A somber corner of the exhibit displays the names, as though inscribed in granite, of the 39 men from Rowan County who were killed in Vietnam or died later at home related to illness in Vietnam. They are listed alphabetically.

Visitors can use digital technology again by pointing on a QR code to access a virtual wall, listing the names of men and women who died in the Vietnam War from the rest of North Carolina or any other state.

One section is devoted to the Montagnards, trusted mountain people who often became the eyes and ears for Special Forces. The Montagnards gave bracelets to U.S. soldiers as signs they were friends for whenever they returned again.

The wooden bootprints the exhibit uses relied on a pattern made from the size 10 1/2 boots of Justin Holt, a captain in the U.S. Army and one of Terry’s sons. Justin wore those boots during one of his tours in Afghanistan.

After the Vietnam exhibit, Holt said, the museum will be offering an exhibit that looks at the days of segregation, leading up to the civil rights movement. It will be titled, “Mama, Why Does the Water Have a Color?”

As with the Vietnam exhibit, it will include augmented reality interviews with people who lived through those times and local artifacts related to lunch counter sit-ins and busing.

“We do this because it allows the museum to interact with the community,” Holt said of Rowan Museum’s consistent efforts to provide meaningful exhibits with personal accounts and artifacts. “We want to tell the community’s story.”

1. This past week, representatives from the Rowan County Chamber of Commerce took a trip to what major U.S. city?... read more