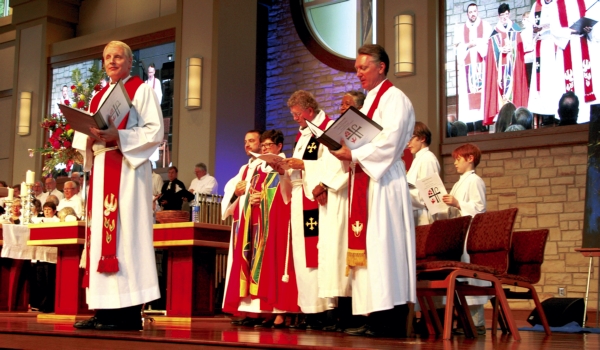 Smith installed as bishop of NC Synod of ELCA

CHARLOTTE — Tim Smith has had a busy weekend.

On Friday, he and wife Wendy closed on a new Salisbury home. On Saturday morning, he participated in the dedication of a new building at his home congregation, St. John’s Lutheran. And on Saturday afternoon, he was installed as bishop of the North Carolina Synod of the Evangelical Lutheran Church in America.

Bishop Elizabeth Eaton, the ELCA’s presiding bishop, told Smith to get used to a busy schedule. It’s a sacrifice, she said, for Smith, his wife and their three adult children, one of whom is a Lutheran pastor.

“But it’s an adventure,” Eaton told Smith and hundreds of pastors, lay leaders, ecumenical partners and members of congregations across the state gathered at Christ Lutheran Church in Charlotte.

Eaton paid tribute to Smith’s predecessor, Bishop Emeritus Leonard Bolick, whom she acknowledged led the synod through 18 years, some of them quite difficult. Bolick was at the helm in 2009 when the ELCA voted to ordain gay clergy members, leading to 40 congregations leaving the N.C. Synod.

It was a time of suffering, but Eaton preached on the text Isaiah 40:6-11, which says, in part, “All people are grass, their constancy is like the flower of the field … The grass withers, the flower fades, but the word of our God will stand forever.”

As Martin Luther said, “We are all beggars,” Eaton noted. “Every one of us stands empty-handed before God.”

We are all, she said, part of “God’s bread line.” The goodness and graciousness of God, she said, is clearly demonstrated through Jesus Christ.

Eaton encouraged Smith, “Model to people your absolute trust and confidence in God.”

In brief remarks, Smith drew chuckles when he mentioned that a Charlotte Observer article stated he would receive the “bishop’s crown.” On Saturday, Smith did receive the bishop’s cross from Bolick.

Smith laughed off the error, admitting he once gave a presentation in which he said multiple times, “Do not admit adultery.”

Smith said he does not believe the church is going away.

But, he said, “I find comfort in my calling. A bishop really only exists to serve a synod. We are all part of that church together. If we find we’re stronger together, that’s what a synod is supposed to be. I need every one of you. I need your prayers and your support.”

Smith praised his assistants, the Rev. Phil Tonnesen, the Rev. Beth Kearney and the Rev. John Mocko. All were on Bolick’s staff and have agreed to stay on.

“I need them to be there and they’re willing to do that,” he said. “I couldn’t do my job without them, and we couldn’t do our jobs without you.”

“It was wonderful to see all of the ecumenical folks here,” Kearney said after the service. There were participants from the AME Zion Church, the Episcopal Church and the Moravian Church. “Today clearly marks a transition. It’s going to be fun to see where we go.”

“When they all laid hands on him and prayed for him, it was such a powerful moment,” he said. “You felt a sense that we are all one church.”

He paused, and placed his hand over his heart.

Smith also used the word “overwhelming” to describe the moment his colleagues prayed for him.