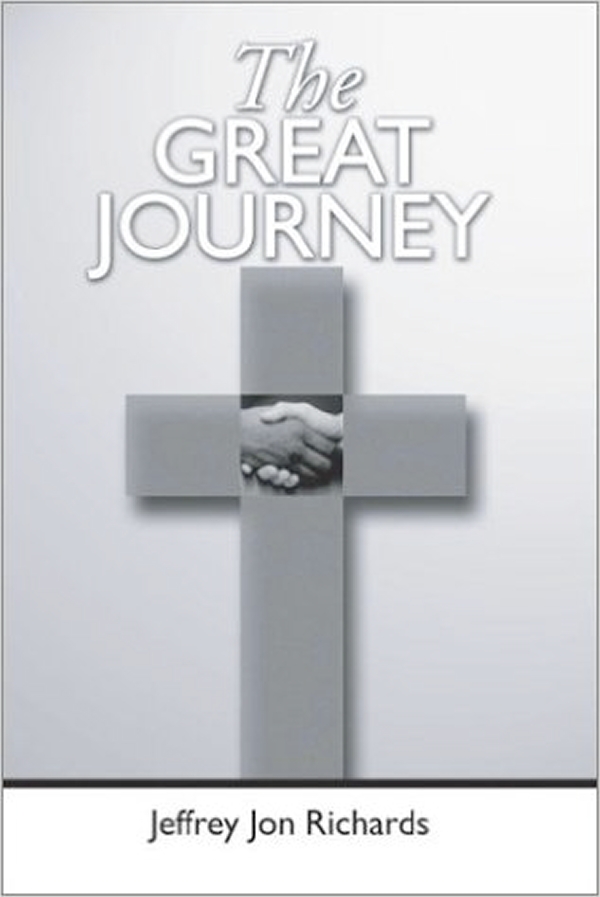 Dealing with racism in ‘The Great Journey’ The Rev. Jeffrey Jon Richards has been having something like a deja vu moment. A book that he penned several years ago appears to be playing out in 2015.

Richards, pastor of New Gilead Church in Concord, wrote “The Great Journey” in 2002. The slim paperback, published by Wipf and Stock in Eugene, Ore., tells the story of two childhood friends who reunite as adults during a time of great racial tension.

That sounds much like this year — except Richards’ protagonists take a bold step. They form a national movement, attempting to bring an end to racism in America.

Here’s a brief Q&A with Richards:

Q: What prompted you to write this book?

A: Most of my classes in the seminary where I was teaching a few years ago were about equally mixed Caucasian and African-American. As we discussed matters pertaining to theology, Bible and the church, I realized that they were taking in the same information and would be using this material in their ministries as pastors, teachers and a variety of other roles in ministry.

They worked well together in groups and genuinely appreciated one another. Many of the students started pulpit exchanges with their fellow students; I was invited to speak at several African-American churches and was always warmly received.

I began to wonder what it would be like if there could be unity not only in a controlled classroom setting, but also “out there” where what they have learned would be put into real life situations.

Since I had witnessed this as a theology instructor and also a pastor, I began to write a book about a subject which would attempt to grapple with issues of conflict and especially racism.

A: What parallels do you see between the plot of your book and today’s racial issues?

A: Racism is a tough topic — we all know something about it, but seldom do we feel comfortable speaking about the subject. Racism seems to be a problem with the human condition, and so it is a global issue.

It would not matter if the discussion took place in 1950 or 2050, the issues would be almost identical because of the human element.

Having my own missions organization, Global Teaching and Preaching, in recent years I have been to several countries in Africa and have witnessed conflict between warring factions, especially in the Congo, Burundi and Uganda. In the Ukraine, there is conflict between Russians and the Ukrainians who are seen as not quite Russian. I saw the same conflict in Latvia. In Germany, there is a large percentage who do not want Middle Eastern immigrants to remain in the country. We are all too familiar with the problems between Israel and her neighbors, and much of the antagonism which many Jews experience. Many of the issues are racial in nature.

African-Americans tell me that racism is as bad as it was in the 1960s, only now it is not as obvious. The tensions in recent months and years in America are a daily reminder that the problem is not going away. “The Great Journey” addresses these issues.

Q: What is the role of the church in addressing racial conflict?

A: I think we would all agree that nothing has worked really to bring healing. Governmental enactments, economic policies, political discussions seem to be fruitless.

Though it sounds simplistic and something that many would say a pastor or theology professor would say, I believe that the only solution is a spiritual one and revolves around the person of Christ. By that I mean having a personal relationship with him reminds us that his humanity transcends race and culture.

Of course, Christians believe that he is divine as well as human, so he has the ultimate credentials to bring wholeness, purpose and peace. The Church with all its imperfections is the key to reconciliation. The Gospel heard and received truly gives life — temporal and eternal — to all without taking into consideration a person’s status, gender, or color. The Gospel lived out in daily living is a reminder that there is hope in the present and future.

A: First full paragraph on page 89:

“From small-town America to metropolitan areas, there was a perceptible change in the air. Blacks and whites began to extend to one another common courtesies. Strangers were more apt to smile and make eye contact with one another. There were episodes of blacks rescuing whites, and vice versa, from burning cars and houses. But it was not the dramatic incidents as much as the sincere attention that both races, young and old, were extending to one another which became the pronounced spirit of the times.”

The Rev. Jeffrey Jon Richards is the author of several books including “The Promise of Dawn,” “War Time Preaching and Teaching” and “The Great Journey.” He can be contacted at jeffrichards7@gmail.com.

In response to “Families Awaiting Justice:  Fifteen people in county jail charged with murder, waiting on trials”: Since being elected... read more