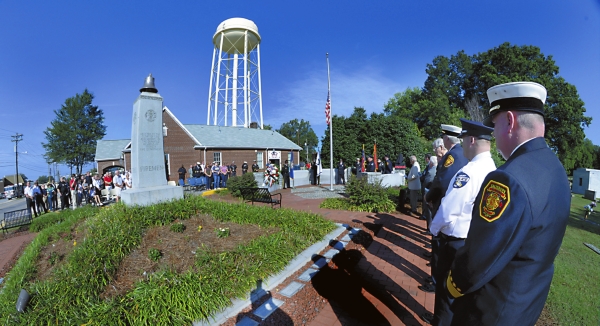 Officials, on the right ,listen to the remarks by Salisbury Police Lt. Andy Efrid, at the 9/11 Memorial Ceremony at the Firefighters Memorial. photo by Wayne Hinshaw, for the Salisbury Post

Even the moment of silence was pierced by sirens.

Sirens sounded, dogs howled and a train rumbled down the tracks nearby.

“They never stop,” said Dan Peters, chaplain of the Salisbury Fire Department. “They continue to respond.”

Sept. 11, 2001, may be 14 years in the past, but images of that day were fresh in the minds of many who gathered at the Firefighters Memorial on South Main Street.

As he addressed the gathering, Salisbury Police Lt. Andy Efird recalled some of those scenes  — airplanes flew into buildings and burst into flames, the Twin Towers collapsed.

“Through all that devastation, it seemed there was some good,” Efird said. American flags appeared everywhere. People visited fire, police and EMS stations to show their support, share food and give a word of encouragement.

As time moved on, that support seemed to wane, Efird said. In some parts of the country, EMS personnel have been ambushed. Officers have been shot simply because they were wearing a uniform, he said, and firefighters have been run over while collecting money.

But the support is still there, Efird said. “People in our town still go out of their way” to let officers know they’re appreciated, he said.

Mayor Paul Woodson and County Commission Chairman Greg Edds echoed the theme, expressing gratitude for those who lost their lives on Sept. 11, 2001, and those who risk their lives daily now to protect and serve the community.

Woodson encouraged the crowd to remember “the blood of our heroes.”

“It was our first responders that risked their lives to save others,” the mayor said.

After the laying of a wreath at the memorial and the ringing of the bell, Emergency Services Chaplain Carroll Robinson read the names of local responders who have died in the past year:

Afterwards, Efird said he was honored to speak at the ceremony and hoped someday to visit Ground Zero in New York — perhaps with his wife for their 15th anniversary.

On the day of the attacks, he said, he had just gotten off third shift and gone to bed. His mother got him up to see a tower in New York burning after a plane ran into it. Then he saw the second jet hit the second tower. “It was obvious it wasn’t an accident.”

The sirens sounded and emergency services rushed to the scene — just as they always do.

Fire rips through Granite Quarry house; No one seriously injured