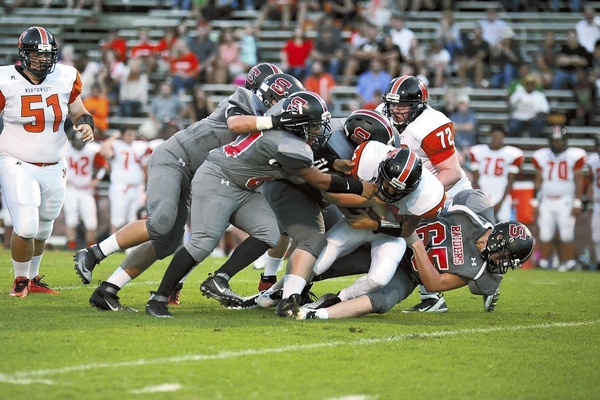 James Sipes/for the Salisbury Post ... Justin Greer (65), bottom of the pile, leads a gang of tacklers as South Rowan stops this Northwest Cabarrus running play during Friday’s game in Landis. The Trojans won the game, 35-34.

LANDIS — Kingda Ka at Six Flags Great Adventure in Jackson, N.J., is billed as the world’s tallest roller coaster, but it was temporarily replaced on Friday night by the amusing ride South Rowan and Northwest Cabarrus took fans on at Donnell Stadium.
South led, 10-0, before the Trojans scored 28 unanswered points. South responded with 24 points in a row before Northwest got the game-decider with 9:08 remaining to beat the Raiders, 35-34.
There weren’t many dull moments.
NW Cabarrus QB Adam Bertino broke a 31-yard run for a 34-all tie, and Alex Gomez’s PAT, which was nearly blocked, steered the drained Trojans toward the winner’s circle.
“Heartbreaking,” said South Rowan’s Daniel Yow, who nearly grabbed his first victory as a head coach. “We grew up some, but we also did some stupid stuff, and it hurts a whole lot worse to lose by one point than to get beat 67-0.”
It’s likely neither team will win often in the South Piedmont Conference, so the Trojans will take it.
“We made so many dumb mistakes, but our kids showed resiliency,” NW Cabarrus coach Rich Williams said. “We got a win and we really needed it.”
Northwest (1-2, 1-1 SPC) had been annihilated in its first two outings. South played respectably in an opening loss to Salisbury before being demolished by A.L. Brown by that 67-0 score Yow referred to.
“We talked all week about this being a winnable game — and it was,” South QB Heath Barringer said. “Guys played hard and we got a lot better on offense. We just didn’t get the win.”
Barringer’s 38-yard run and a school record-tying 51-yard field goal by Brennan Lambert that split the uprights with 10 yards to spare gave the Raiders a 10-0 lead.
But South fell apart in the second quarter with turnovers, and Northwest cashed in for two touchdowns in a span of 10 seconds on a 1-yard plunge by Bertino, a fumble recovery, and a Bertino pass to a wide-open Hunter Foreman.
By halftime, Bertino had thrown a pair of TD passes to an uncovered Nathan Clark, and the Trojans were in control 28-10. Well, at least they were apparently in control.
“That second quarter we played like we were scared to be successful, and that’s what we talked about at halftime,” Yow said.
South’s Trey Littlejohn laid a lick to start the second half that could be heard in Kannapolis, and suddenly the Raiders became the aggressors and injuries started piling up for Northwest.
The Raiders owned the third quarter, with Bailey Purcell and Barringer getting touchdowns and Lambert adding another field goal. Lambert’s routine 34-yarder cut Northwest’s lead to 28-27.
“We played bad in the first quarter and terrible in the third quarter,” Williams said. “We lost our punter and we lost our long snapper and those things hurt us, but in the second and fourth quarters we played OK.”
When South’s Sayquan Anthony punched his way into the end zone behind stout blocking with 10:04 remaining, the Raiders had come all the way back and led 34-28.
“Our offensive line played great,” Yow said. “That game got down and dirty, but we were getting after it.”
It slipped away from the Raiders in the fourth quarter.
Bertino, who had been banged up enough to leave the game in the third quarter, broke his big run for 35-34. Then Northwest’s defense got two huge stops.
With four minutes left, Northwest’s Caleb Perkins recovered a South fumble on an option pitch.
Northwest then was able to exhaust the clock with the help of a South penalty. South’s Brian Cagler guessed the snap count and had Bertino wrapped up immediately for a sack, but the whistle didn’t blow right away, and Cagler dumped Bertino to the ground, drawing one of the night’s numerous flags.
Leading by single point, Northwest wisely took knees rather than scoring after it reached the South 1-yard line. Even if Northwest had tacked on seven points, South would’ve gotten the ball back, down eight, and with a chance to tie with a TD and 2-point conversion.
“This was a lot different from our first couple of games,” Lambert said. “We had our chances tonight. We’ve just got to learn how to win.”