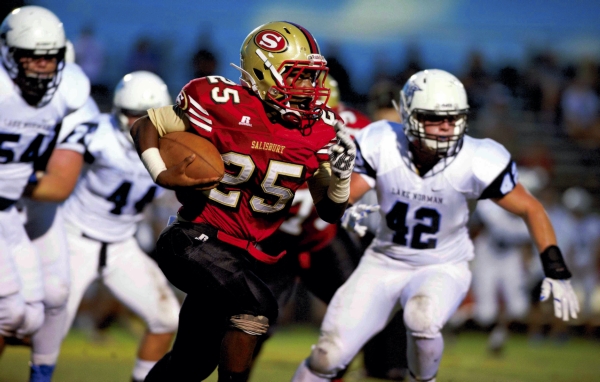 SALISBURY — The Salisbury Hornets already faced an uphill battle against 4A power Lake Norman Friday night at Ludwig Stadium but a series of punting and long snapping misadventures in the first half made the task almost impossible.

The Wildcats gladly accepted some gift-wrapped points in the first half then overpowered the Hornets in the second half with their spread offensive attack to post a decisive 55-8 win. The defense for Lake Norman (3-1) was dominant as well, limiting Salisbury (1-3) to just 63 net yards of total offense while sacking Hornet quarterback Harrison Smith six times.

Problems for the Hornets began right out of the gate as they attempted to punt on their first possession, but the long snap sailed over Arturo Ramirez’s head and out of the end zone for a safety. A 32-yard field goal by Lake Norman’s Greyson Hitchner made it a baseball-like 5-0 after the first quarter. The second quarter turned disastrous for the Hornets as a high snap bounced into the end  zone and turned into a Wildcat touchdown. Then, a low snap led to a partially blocked punt, allowing the Wildcats to drive for another touchdown to make the score 19-0.

“In the first half, we had a lot of positive things going for us,” said Salisbury Coach Ryan Crowder. “We were getting stops and making plays, but those bad snaps just killed any of the momentum we had. We just cannot do that.”

Salisbury’s Tywun Rivens recovered a Wildcat fumble at the 17 to stop a threat, but on the very next play, the ball was snapped directly over Smith’s head into the Hornet end zone. Lake Norman’s Eric Warren came out of the pile with the ball for the touchdown to make it 12-0. On their next possession, a low punt snap to Ramirez was partially blocked and only went a net three yards. That led to a 42-yard drive capped by a two-yard run from Cole Jackson.

Ramirez did boom a beauty of a punt late in the first half, covering 54 yards and pinning Lake Norman back on their one. But the Wildcats proceeded to drive 99 yards for a score, aided by a trio of personal foul penalties against the Hornets. Lake Norman quarterback Cole Ladowski capped the long drive with a three-yard TD toss to Dylan Bahr, then ran the two-point conversion himself to up the margin to 27-0 at the half.

The Wildcats then twisted the knife to open the second half as Trey Read gathered in the kickoff and broke free for a 91-yard return to make the score 34-0. Lake Norman then turned to reserve quarterback Hayden Carlson who responded by hitting 8 of 9 passes, including touchdown tosses to Jackson and Joey Stange to up the margin to 48-0 and start the running clock.

“Our running game opened up the passing game for us tonight,” Wildcat head coach Rob McNeely noted as his two quarterbacks combined to connect on 19 of 26 throws. “I don’t think we made too many bad throws tonight. I also think we did a good job on special wise by creating some turnovers that put our offense in a good position.”

Salisbury finally did put together a solid offense drive early in the fourth quarter as they moved 65 yards in just 5 plays to get on the scoreboard. Smith passed 35 yards to wide receiver Will Steinman, then ran for 12 yards on a keeper to put the ball at the 8. Daeshaude White then capped the drive with a scoring sweep on the end around. The Hornets made it 48-8 when Antwond Glenn ran in the two-point conversion.

The Wildcats answered with another sustained drive of their own to make the final 55-8 as Nick Frisella scored from the two with just over three minutes left.

Hornet linebacker Cameron Glenn had some big stops in the game but said it was tough against a versatile Lake Norman attack that produced almost 350 yards of offense. “We really had to get everybody involved and in their right spots, ” he said. “But those penalties and turnovers  have just got to go. They put us in a bad spot tonight.”

The Hornets have two more non-league games coming up that Crowder wants to use to get his team primed for their Central Carolina’s conference schedule. “We have to work out all of these rough spots and get better every week so that we can be ready when the games really count,” Crowder said. Next Friday, they will head to play the Ledford Panthers before coming home to face last year’s playoff opponent Surry Central.