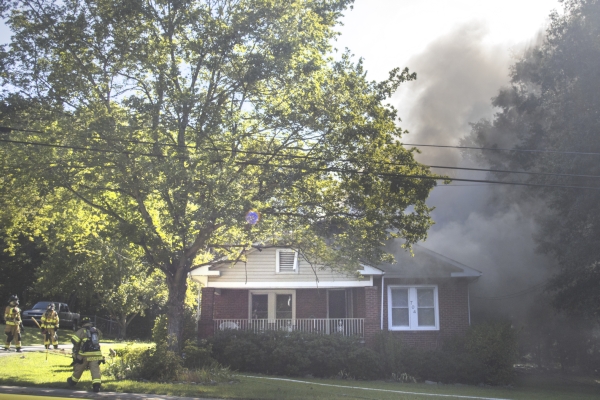 Josh Bergeron / Salisbury Post - Smoke billows out of a house at 704 North Salisbury Ave. in Granite Quarry. The house was declared a total loss following a devastating fire. No one was seriously hurt in the fire.

Fire rips through Granite Quarry house; No one seriously injured Josh Bergeron / Salisbury Post – A firefighter waits at the top of a ladder as another brings him a hose. The firefighters were responding to a blaze in Granite Quarry that ripped through a single story residence. Josh Bergeron / Salisbury Post – A firefighter puts out remaining hot sections of a fire in Granite Quarry on Friday. The house was declared a total loss. No one was hurt in the fire.

No one was seriously injured in the fire. Two people were treated at the scene, one for smoke inhalation, but no one was hospitalized, according to Granite Quarry Deputy Fire Chief Bill Fraley. The fire started just before 10 a.m. at a house on the 700 block of North Salisbury Avenue, according to passersby.

Edward Funk, who was treated for smoke inhalation, was part of a group of passersby that helped the house’s two residents escape from the burning house. The passersby also saved one of the two cats also living in the house.

Tony Moffre, part of the group of passersby, said he could see a plume of smoke from two blocks away as drove south on North Salisbury Avenue. Moffre and several others began banging on the door of the Granite Quarry house. Moffre said the group was seconds away from busting the house’s door down, when one of its residents came to the door. The resident said he had been asleep, Moffre recalled.

Fraley said the fire started in the rear of the house. The cause of the fire is still under investigation, he said.

The fire quickly spread to other rooms of the residence and into the attic, creating a stack of dark grey smoke that towered over North Salisbury Avenue.

The 10 agencies, however, weren’t able to save the one-story residence. Because of damage from the fire, Fraley said the house couldn’t be salvaged.

The first emergency responders were on the scene shortly after the initial 911 call came in. Cindy Alley, part of the group of passersby, said she called 911 at 9:54 a.m. The fire appeared to be under control within 30 minutes.

Firefighters remained on the scene for more than an hour, putting out hotspots and extinguishing remaining areas of the house.

The entire rear of the property was black and charred. Firefighters pulled down sections of the attic to extinguish remaining hotspots.

Katie Scarvey For The Salisbury Post “Any time women come together with a collective intention, it’s a powerful thing. Whether... read more