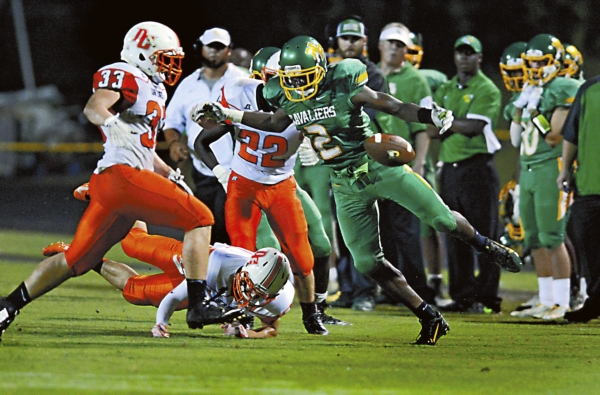 SPENCER — Two desperate teams looking to straighten things out collided here last night, and it was visiting Davie County that got the monkey off its back.

North Rowan, on the other hand, is still reeling after a 21-6 setback to the War Eagles.
Davie improved to 1-3 after losing big to heavyweights Page and Dudley and blowing a 14-point lead to West Rowan. The Cavaliers fell to 1-3 with their third straight loss.
“Oh boy, it feels real good,” Davie coach Devore Holman said. “I told them the other day, we put them through a storm and they fought some beasts. But it’s about time to start seeing some rays of sunshine. We got the first one under our belts. We’ve got to enjoy the moment tonight.”
After receiver Alonzo Sirleaf went 76 yards on a pass from Josh Ellis to give North a 6-0 first-quarter lead, the Cavaliers managed just 120 yards the rest of the night.
“I thought we were on to something,” North coach Ben Hampton said. “That’s kind of been the tale for us the past three weeks. On offense, we sputter, we sputter. We finally start executing the game plan, and then we turn it over. Or we get a first down and we get a personal foul.”
On North’s second possession, Sirleaf broke a tackle at the Davie 45 and was gone on the 76-yard play. The point-after kick was blocked.
Thanks to big pass plays from Chris Reynolds to Cooper Wall, Ben Ellis and Mitchell McGee, the War Eagles rallied for a 13-6 halftime lead.
“They played a lot of man free and they played zero man, and we were able to take advantage of that at times,” Holman said.
Three plays after Sirleaf’s explosion, Wall caught a slant over De’Andre Gray’s outstretched arms in one-on-one coverage and sped 77 yards to the end zone. Jonn Young’s extra point made it 7-6.
Following the game’s eighth punt in the first 17 minutes, Reynolds hit McGee for 38 yards. Moments later, sophomore running back Ben Summers went nine yards — barely getting touched — for a touchdown on his third varsity carry. North’s Courtney Roseborough blocked the extra point, leaving Davie’s lead at 13-6.
North’s Jacob Young booted a 25-yard field goal and less than two minutes later, Jonn Young’s 30-yard attempt for Davie was blocked by at least two Cavs, with just 20 seconds left in the half.
Ben Ellis, who had eight catches for 102 yards, was a major factor. Not only did he return the kickoff to start the third quarter 41 yards — with a 15-yard, late-hit penalty tacked on – he scored on a 19-yard reception to give Davie the 21-6 lead.
“Something we’ve worked on is our special teams,” Holman said. “We’ve spent a lot of time; I believe it’s that important. For us to reap some benefits off of it is a big thing for us.”
The Cavaliers had two chances to get back in contention, but two fumbles kept them in an uphill climb. The first fumble happened at the Davie 26 yard-line. The next fumble — on the next North possession — came at the Davie 41.
North’s defense did its part in the second half, but the offense produced an overall dud. Spencer Wilson and Davie’s defense held North to 30 rushing yards. North went 2-for-12 on third down, leading to nine punts. Its top rusher, Xavier Haley, was smothered all night (five yards on 10 carries). North also had 79 yards in penalties.
Josh Ellis and Corbin Smith shared time at quarterback for North and went a combined 13-of-22 for 183 yards.
“I thought the defense played well in the second half,” Hampton said. “Like I said, we’ve got to execute on the offensive side. Until we eliminate mistakes and turnovers, we’re not going to be very successful.”
Davie rushed for 127 yards and Reynolds went 13-of-25 for 231 yards, including 192 in the first half. Stephon Dalton had by far his most productive night on the ground with 69 yards. It would have been better, but his 52-yard score in the fourth was waved off by a block in the back penalty. Davie was slowed by 11 penalties for 105 yards.
But the story was Davie’s defense. It played superbly in the first half against West Rowan. This time it put four quarters together.
“Coach (Tim) Devericks and that defensive staff, man, they put in a lot of time to get the young men running to the ball,” Holman said. “To see them swarm takes me back to some defenses from years past.”
Blitzing linebackers Cody Hendrix and Broc Barnette forced Ellis and Smith to hurry throws, and defensive end Spencer Wilson was wreaking havoc all night as Davie outgained North 358-196.
“My gosh, (Wilson) played like a man possessed,” Holman said. “He’s got it in him. He’s got to keep that motor cranked up like that all the time. If he keeps it cranked up like that, he’s got a chance to be real good.”