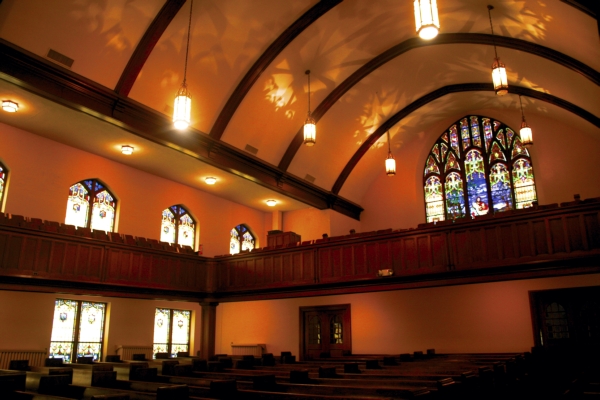 Kepley is a lifelong member of the congregation and its lay leader. “We stick together,” says Kay, who’s served as church secretary for the past 10 years.

The family of Coburn will celebrate its 125th anniversary this Sunday, Sept. 13, with Sunday School at 10 a.m., worship at 11 a.m. and a covered-dish luncheon following in the fellowship hall.

The church’s history dates back to 1888, and the congregation was formally organized in 1890. Rev. A.L. Coburn, for whom the church is named, was its primary organizer.

The first meeting was to be in a school in an area known as the Black farms. However, Coburn and his group found the doors closed to them. Still, Coburn went on with his plans, and held worship under nearby dogwood trees, with railroad crossties for pews.

Jack Kepley, a lifelong member of Coburn who grew up in Chestnut Hill, loves telling that story.

Jack says the church has its glory days back in the 1950s and ’60s, with some 600 members filling the handsome sanctuary to capacity.

“We had no parking lot,” he says, “so all of them walked to church.”

Jack is proud of the fact that the congregation is in its 80th year with Boy Scouting, and he’s been a part of the program for all but two years. His name is even on the Scout building. The congregation boasts 136 Eagle Scouts.

Jack and Kay acknowledge that the Chestnut Hill neighborhood has changed over the years, with the closing of textile mills that once employed so many residents.

Coburn Memorial, along with the other three churches in the neighborhood — Haven Lutheran, St. Paul’s Episcopal, and Stallings Memorial Baptist — are all part of the Chestnut Hill Neighborhood Association, whose goal is to revitalize the area.

“I’ve gotten to know people I didn’t know before,” Jack says. “Neighborhood revitalization is the salvation of this church.”

Even though the church is small, Kay says, it participates in local outreach projects. It supports the Pregnancy Support Center, also in the neighborhood, and has hosted neighborhood fairs with games, hotdogs and activities. The Methodist Men participate in a gleaning program, and this summer delivered 100 watermelons to Rowan Helping Ministries and 100 watermelons to Main Street Mission in China Grove.

Piedmont Research Station donated the watermelons, Jack says. “I didn’t know we had so many different kinds of watermelons. It was so interesting.”

Kay says that despite its challenges, the church is moving in a positive way.

“Coburn has a lot of traditions, but contemporary elements, too,” she says. “It’s a good blend. I like what we do.”