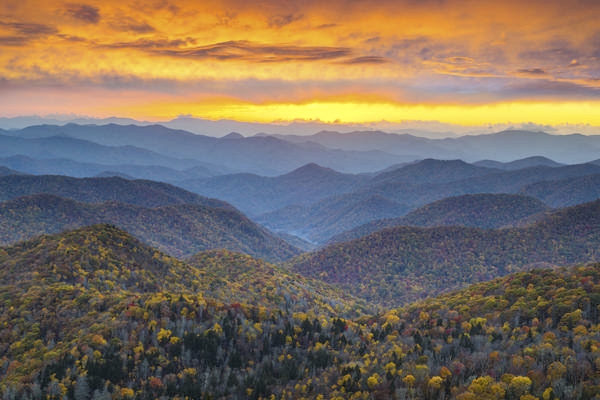 Fall color in the mountains should be superb this year.

ASHEVILLE — An exceptional display of fall color fireworks is coming to the Blue Ridge Mountains, all thanks to the weather. That’s what biologists and climate scientists are predicting for Mother Nature’s 2015 fall foliage display across the Asheville area, home to one of the longest and most colorful autumn leaf seasons in the world.

NOAA’s National Climatic Data Center (located in Asheville) reports that fall color in this area should be more vibrant than average this year due to below-average rainfall during spring and summer.

“It has been pretty dry in Western North Carolina, with a few days of heavy rainfall,” said NOAA Climate Scientist Jake Crouch. “The occasional heavy rain has allowed us to stay out of drought, but allowed soils to be drier than average which typically means brighter fall colors in the mountains.”

According to Mathews the formation of higher levels of (red) pigments in the leaves correlates with dry weather throughout the year, but especially in the months leading up to fall. “That’s what causes the leaf colors to really pop, along with the simultaneous appearance of orange and yellow pigments on the same or different tree species,” Mathews said.

“The weather in September can have a large influence on the timing and quality of fall leaf color,” reports Dr. Howard S. Neufeld, professor of biology and “fall color guy” at Appalachian State University. “If morning temperatures keep dropping through September that will be good news for fall color development.”

“El Niño (weather event) typically means a drier than average autumn in our region, which would be good news,” Crouch said. “El Niño also limits Atlantic hurricanes. If the remnants of a hurricane with strong winds and heavy rain made its way into Western North Carolina it could cause leaves to fall off trees prematurely.”

Early signs that fall is on the way are already appearing. “We’re starting to see the very beginnings of fall color, but only sporadically,” said Neufeld. “The sentinels, those early turning species, are letting us know that bigger things are in store over the next few weeks. Burning bushes are starting to turn their vivid red, and dogwoods are slowly turning a deep burgundy red. There are a few scattered sugar and red maples that are turning now, but these are the exceptions, rather than the rule.”

The highest elevations above 4,000 feet are still very green, said Neufeld. “Fall colors begin to develop first at higher elevations (which are colder) and then move downhill, about 1,000 feet every 7-10 days later.”