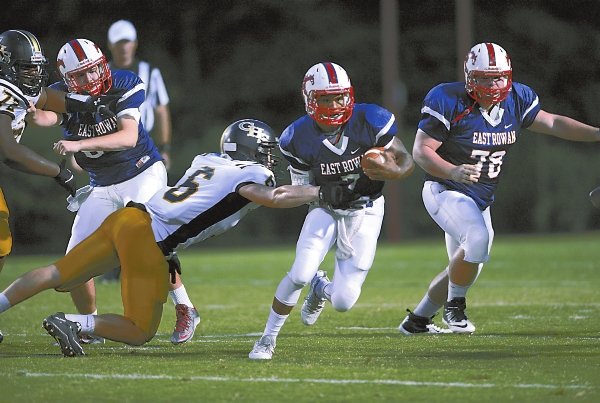 By Mike London
mike.london@salisburypost.com
Prep football notebook …
East Rowan quarterback Max Wall’s extraordinary statistical game in Friday’s 49-28 loss to Concord ranked among the most prolific offensive performances in Rowan County history.
Wall was credited with 162 rushing yards and 192 passing yards for 354 yards total offense.
That ranks 16th in county history and fourth in East Rowan history. Samuel Wyrick had three games with more total offense last season — 395 against Cox Mill, 425 in the playoffs against South Point and 433 in a playoff game with Freedom.
Wall likely had the most rushing yards ever in a single night by an East Rowan quarterback. Jamey Blalock had 152 in 2009 in a 31-27 win against Statesville, while Shawn Eagle rushed for 143 in a 43-29 win against South Rowan in 2007.
•••
Speaking of Blalock, he remains the last East Rowan QB to lead a win against Concord in 2009 when the Mustangs were piloted by current Catawba offensive line coach Brian Hinson.
East has lost six in a row to the Spiders and 32 of the last 33 meetings.
•••
East (1-2) has fared somewhat better against Friday’s opponent — Cox Mill. East is 3-1 against the Chargers.
•••
Naquis Caldwell was good last season with 36 catches for 502 yards and eight TDs as the Mustangs’ No. 2 receiving target, but he’s been the main man in 2015 with 13 catches, 328 yards and five scores.

Carson
Carson is 2-0 after beating North Rowan and Salisbury in the same season for only the second time in school history. The other time was in 2010 when the Cougars went on to set a school record with 10 victories.
•••
Carson’s defense has created 11 turnovers in two games, including four fumble recoveries by Ryan Bearden (who also has an interception and a blocked punt) and two interceptions by Brenden Westbrook.
Bearden already has broken the school’s season record for fumble recoveries. Stephen Ashby and Zach Wright (2007), John Mullis (2008), Zack Grkman (2009), Ryan Shoaf (2010) and Patrick Ratliff (2011) all had three fumble recoveries in a season.
•••
Carson’s school record for a season is 34 forced turnovers set by the 2010 defense. That team came up with a school-record 21 fumble recoveries.
The Carson record for interceptions in a season is 18 by the 20013 squad. Tre Williams and Tyrese Paul had four apiece to lead the way.
Carson coach Joe Pinyan won’t be surprised if Westbrook breaks the individual school record for interceptions in a season. Derrick Sewell, who had three against West Iredell, set the mark with six in 2009.
“Westbrook is good and he played lights-out the last three quarters against Salisbury,” Pinyan said. “If teams keep throwing it around, he’s going to get some.”
While Westbrook dropped a sure pick-six against North Rowan, he more than made up for it with a game-clinching interception return for a TD in Monday’s 27-13 win against Salisbury.
Westbrook’s pick-six was the first for the Cougars since Armoni Hogue, who plays the opposite corner, took an interception all the way against the Hornets last season.
•••
Linebacker Alex Deal was a rock for the Cougars on Monday. He was in on 17 tackles (nine solos), broke up two passes and forced a fumble.
•••
With Tanner Christy sidelined by a broken finger, Blake Daniels moved from a backup linebacker spot to the defensive line and came through with a big game. He had one of Carson’s four fumble recoveries.
•••
Pinyan said Carson’s offensive line had an improved performance from Week 1. The line opened enough holes for Dylan Livengood, Owen White, Austin Lear, Andy Lear and Bailey Rayfield to grind 200 yards.
•••
Pinyan admitted there’s still some extra emotion when he leads Carson against Salisbury, a school where he coached 100 wins in 10 seasons. Ryan Crowder, Pinyan’s longtime coordinator, is now the Hornets’ head coach.
“As much as I enjoy being a Cougar, a part of me will always be a Hornet,” Pinyan said. “We had some great years there, some great wins there, and people treated me great there.”
Salisbury’s current seniors were freshmen Pinyan’s last season at Salisbury.
•••
Carson plays at Central Cabarrus on Friday. That’s a team that’s beaten the Cougars the last two seasons.

Salisbury
Daeshaude White’s 95-yard kickoff return for a first-quarter touchdown on Monday was the first kickoff return TD by a Hornet since Justin Ruffin accomplished the feat against Thomasville in 2012. Ruffin also had one that season against North Rowan.
White, a senior, scored his first TD since he found the end zone against Lake Norman as a sophomore.
•••
You could stump your friends with question: “Who leads the Salisbury Hornets in scoring after three games?”
The correct answer is cornerback Shaquez Strickland. Strickland added a fumble return TD against Carson to his touchdown on a punt return against South Rowan.
Salisbury has scored seven touchdowns, but only four have been on offense.
Strickland has a nose for the ball. He led the Hornets with three interceptions last season.
•••
The Hornets (1-2) face what may be their tallest order of the season Friday when they host 4A Lake Norman.
Lake Norman rolled, 49-7, in the matchup last year in a game that was halted after a half by lightning.
Antwond Glenn scored the Hornets’ TD.

West Rowan
After its open week, West Rowan (1-1) travels to Robinson on Friday for the Falcons’ SPC opener.
Robinson, dropping down from the 4A MECKA to the 3A SPC this season, already has played three league games, winning against Central Cabarrus and Northwest Cabarrus and losing to Hickory Ridge.
West has never played Robinson in football.
•••
The Falcons have won nine conference championships (all in the period from 2000-2011). In all nine of those seasons, the Falcons won their conference opener.

South Rowan
After its open week, South Rowan (0-2) hosts Northwest Cabarrus on Friday.
South has won 21 of 32 meetings with the Trojans and broke a long road drought in the series with a win at Northwest last year.
Both teams are looking forward to this matchup and with good reason. It’s a game they have a realistic chance to win.
Both teams have lost in lopsided fashion to A.L. Brown.
Northwest has been outscored 104-7 in two outings, while the Raiders have been outscored 102-20.

A.L. Brown
Coming off a 56-7 romp against the Northwest Cabarrus — the Wonders (3-0) host Mooresville Friday in a highly anticipated contest of two strong teams.
The game falls on the 14th anniversary of the 9/11 terrorist attacks in 2001 and it will be — appropriately — Military Appreciation Night in Kannapolis.
•••
While the schools aren’t far apart, and while both have reputations for great fans bases, they haven’t squared off since Mooresville edged the Wonders 23-21 at home in 2008.
•••
A.L. Brown QB Damon Johnson has a QB rating that’s through the roof with six touchdown passes and no interceptions. Johnson is completing 62.5 percent of his passes and has thrown for 427 yards.
•••
The Wonders have put up staggering numbers the last two weeks against overmatched opponents and lead the area stats in offense and defense by a wide margin.

Davie
Davie (0-3) has the distinction of losing to two of the state’s best in the first three weeks. Page is ranked ninth in 4A, while Dudley is ranked sixth.
Davie has dropped five in a row, dating back to losses to Mount Tabor and Charlotte Catholic that ended last season.
Davie has lost six straight road games since beating Thomasville 31-13 on Sept. 19 of last season.
Davie travels to North Rowan on Friday for a matchup of hungry teams.
•••
How tough was Dudley, a 56-14 winner over the War Eagles last week? Davie QB Chris Reynolds entered the game with 49 rushing yards for the season and left it with minus-2.
•••
Between them, Ben Ellis and Cooper Wall have 32 catches. Ellis already has five TD catches.