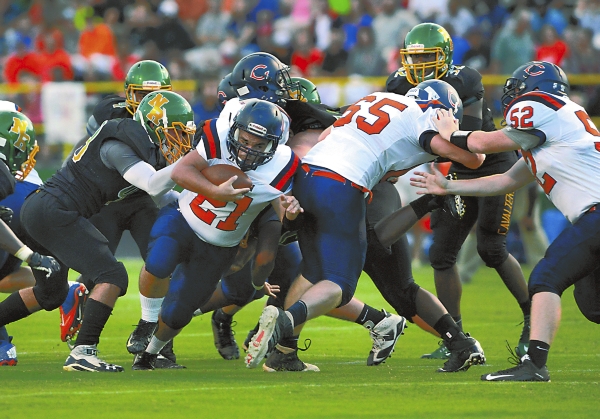 Wayne Hinshaw/For the Salisbury Post In a victory against North Rowan on Aug. 28, Carson’s Dylan Livengood (21) plows through the line of scrimmage for a gain. On Monday, Livengood rushed for 94 yards in the rain as the Cougars toppled Salisbury, 27-13.

CHINA GROVE — Senior fullback Dylan Livengood is one of Carson’s four captains, a position of authority that has teammates looking up to him.
“Yeah, everyone likes to joke about how the team looks up to me,” Livengood said. “Because really they’re all looking down to me.”
At 5-foot-3, Livengood even has most of Carson’s cheerleaders looking down at him — and we won’t even talk about the Cougars’ volleyball team.
But Livengood leads by example with 217 pounds of feistiness and powerful calves that never stop churning.
“There’s an awful lot of fullback smashed into that little body,” Carson coach Joe Pinyan said. “He runs so hard and he fights for everything he gets.”
Livengood has made key plays in Carson’s season-opening wins against North Rowan and Salisbury.
In Monday’s soggy, 27-13 victory against the Hornets, when most were having trouble just hanging onto the ball, Livengood broke a 21-yard touchdown run. Then he set up another score with a 35-yard burst.
Named Carson’s Offensive Player of the Week, Livengood rushed for 94 yards, the second-biggest game of his career, trailing only his 103-yard outing at West Rowan last season.
“I’m usually not going to get that many carries,” said Livengood, whose career high for carries was 14 last season against Hickory Ridge. “I just try to make them all count. A 5-yard run is a good run and an 8-yard run is a great run.”
Livengood got started young, playing YFL ball when he was a third-grader. It didn’t take long for him to acquire a nickname that still fits — “Tank.”
His first serious adversity came prior to his sophomore season when he tore an ACL in a preseason scrimmage. But he turned that setback into an advantage, using the year he was sidelined to get a lot better.
“My dad always told me that I was never going to be the fastest horse, but I could be the quickest pig,” Livengood said. “Coming back from the ACL, I worked hard to get quicker and I got a lot stronger, especially my legs.”
Livengood’s first touch on Monday was an odd one. Carson had a first-and-5 situation after a Salisbury penalty, and quarterback Owen White ran the option. He rammed the ball in Livengood’s belly, but then he held onto it for what seemed like two seconds.
“I should have asked Owen if he was planning on running to the end zone with me,” Livengood said with a laugh. “I got through the line and then I saw (receiver) Brandon Huneycutt heading for the end zone and he was yelling for me to come on.”
Huneycutt made the springing block that enabled Livengood to score a touchdown.
The score was 13-13 in the third quarter when Livengood suddenly squirted to daylight up the middle on a trap play, on first-and-10 from the Salisbury 42. Livengood cut to his right and charged down the sideline all the way to the Salisbury seven-yard line to set up White’s go-ahead touchdown run.
“Our line blocked perfect on that trap,” Livengood said. “I tried to stiff-arm that big safety (Jaylen McDowell) to get to the end zone, but he jumped on my back and got me down.”
For most of the night, however, Livengood was the quickest pig in the barn. He gained at least five yards on every carry.
Pinyan joked that any story about Livengood would be a very short story, but he appreciates his fullback.
“He may not be as fast as some of those good fullbacks I coached at Salisbury, but he bounces off guys and he makes plays,” Pinyan said. “He’s got good vision. He can really scoot around.”
Livengood scoots under them, by them, and occasionally right over them.
“I guess I did surprise myself a little bit against Salisbury,” Livengood said. “But it’s not like I really have a running style. All I do is run hard.”
That’s something he does well. That’s why a lot of teammates look up to him.